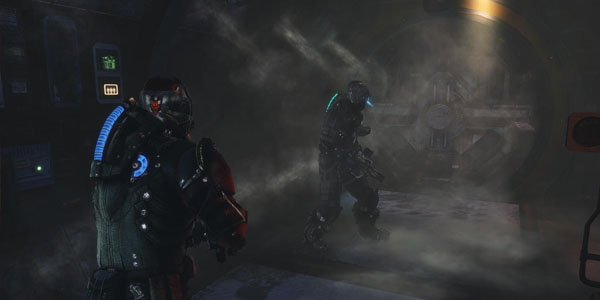 It took approximately three and a half to four hours for Ghostwalker and I to clear the new Dead Space 3 DLC and we enjoyed the journey! That’s on par with the main campaign considering we got about an hours worth of entertainment out of DS3 for every $3 and change we’d spent on the retail copy. Three and a half hours for $10 is a fair deal in comparison. Want more details? There’s spoilers to come, so be wary!

The DLC is a continuation to the end of the main campaign featuring Issac and John awakening on the planets surface yet again. In the far distance you can see the moon, crashed into the planet on the horizon. The story is well set up, featuring the two main stars conflicted with their situation. They’re unsure how they survived, but are more concerned with getting away from Tau Volantis.

While there are quite a few familiar areas in this DLC, you should think of it more as a new episode. There is a good chunk of story to go through, a new villain, and quite an epic conclusion. Especially if you’re a fan of the series, you’ll want to take this ride as it does expand on the ending and give more insight into what has become of the necromorphs.

The hallucinations do have some unique moments more than just adding to John’s moments in the Tau Volantis’ side missions. For starters Issac will get to experience those for the first time if you’ve only played through as him. Otherwise there are some nice situations that you’ll get into focused around hallucinations that will have you questioning if you’re actually fighting off enemies or seeing things.

Really I think any game that has me say to my co-op friend, “The vision I just had told me…” gets some bonus points. The moments in Dead Space 3, and in this DLC where things happen to you and not your co-op partner are fun. I wish there was more of these in the game. Definitely something I’d like to see in future games.

There is a lot in Awakened and it continues with the same quality as the game itself. All your equipment from the main campaign does carry over as well, which is a good thing. If you enjoyed Dead Space 3 as much as we did, you’ll have fun getting back in your favorite suit and taking this journey. Awakened is a solid addition to the Dead Space storyline. It feels more like a new episode of your favourite TV show than just more content, familiar yet a good addition.