SNK HEROINES Tag Team Frenzy is a fast, colourful tag-team fighting game from NIS America. While the game is a little bit light and has a few small flaws, it’s an enjoyable and unique fighting game that is pretty fun to play. It’s not an instant classic that is going to become a tournament staple, but it holds its own.

The game has a brief single player story mode. The heroines suddenly awoke to find themselves in a strange mansion they’d never seen before. And to top it off they find themselves dressed in strange new outfits as they begin to explore the mystery mansion. So begins their battle to discover the truth behind these strange events. They have been summoned to this pocket dimension by a strange hooded figure who is pitting the heroines against one another.

It’s a weird but simple story. Kudos to SNK and NIS America for leaving the clearly weird Japanese story and characters in tact. It’s strange but satisfying.

Each team has an Attacker and a Supporter character for a total of 4 characters per battle. You’ll control one character at a time and swap in the other character as needed. You share a total life value through the battle, though each character has a unique special charge meter. While this meter depletes as you use special moves during the battle, it will slowly regenerate through the match. The character which isn’t in the active role will have their meter charge more quickly, so tagging between characters can be key to winning the battle. 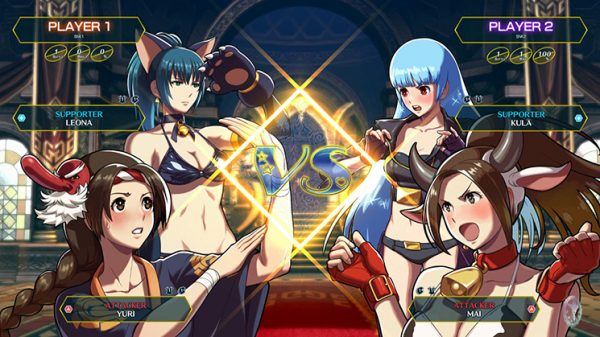 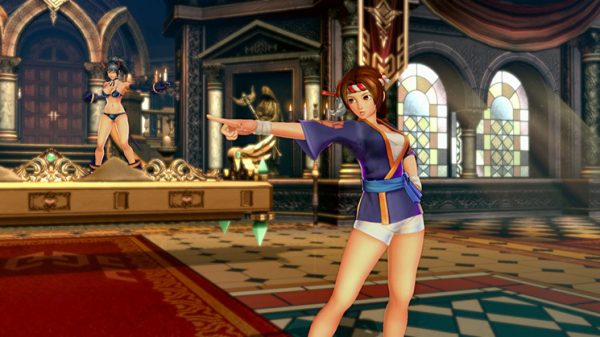 Most characters have a basic control scheme for moves like punch, kick, special, etc. With very limited deviation it makes it easy to play any character. Each character also has two different Dream Finish moves, one with just the button press and another by pressing down plus the finishing button. The various dream finish moves for each character also have different ranges, from up close to distance strikes, so it does take some practice with each character to perfect necessary these attacks.

It’s a little disappointing though that not all button combos are utilized for different movesets, i.e. pressing the punch button plus up, down, front, or back does the same move. It would have been nice to have a little bit more variety for moves.

In all there are 14 playable characters available right off the bat, with more being planned for release after release. The characters have four different coloured skins for their default costume but you can also purchase two additional costumes in game using coins that you earn by playing. These alternate costumes are, for the most part, significantly different from one another so when you do change a costume it feels essentially like playing with an entirely different character.

The game also has a pretty healthy customization mode as well. There are a ton of different costume elements and decorations to choose from. While some of these are downright silly (who wants to have a ringing phone on the top of the character’s head) there are a quite a few great ones. Plus as you purchase / unlock alternate costumes from the various characters, some of those costume elements become available for use in other characters. Not only that but each costume unlocked has four different colour skins to choose from.

The customization is pretty fun to play around with, even if you can’t do the same with the movesets. 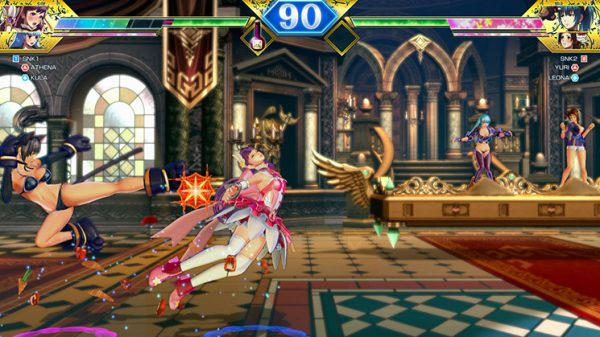 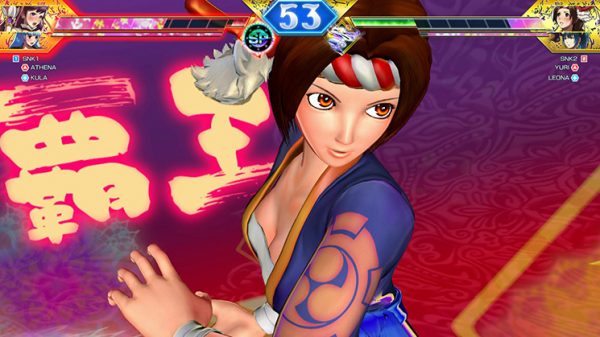 Overall the characters and environments look beautiful. The only glaring oddity that doesn’t look beautiful comes in a strange place. For some reason the hands on the character models all look too large. Hands are one of the hardest things to draw, but I’ve never noticed character models with such large hands. I’m not sure if they are the same way during battles, and the drawn art looks flawless, but during cutscenes the large hams are laughably noticeable.

The one thing I love about playing this sort of game is the Japanese language track. In all honesty I usually like the original Japanese better than the dubbed English – it just feels more natural. Well, in SNK HEROINES Tag Team Frenzy there isn’t even an English language track to choose from so all of the cutscenes are subtitled in one of five languages. There is only one small issue – the subtitles are tiny on the screen. While it’s a very small problem, and the story isn’t really all that important in the story mode, it would have been nicer to have an easier time reading the text. Thank goodness for handheld mode, though the text is even smaller on the smaller screen.

Speaking of handheld mode, why isn’t there touch screen support for the menus? It seems like the large on-screen icons are wasted as they look like they’re meant to be tapped.

But enough of the negatives – SNK HEROINES Tag Team Frenzy is incredibly fun to play. The game has scaling AI difficulty which can be amped up or turned down if you’re finding battles too easy or too tough. Grab a friend and enter the SNK dream match in this frenetic fighting party game featuring everyone’s favorite female fighters.