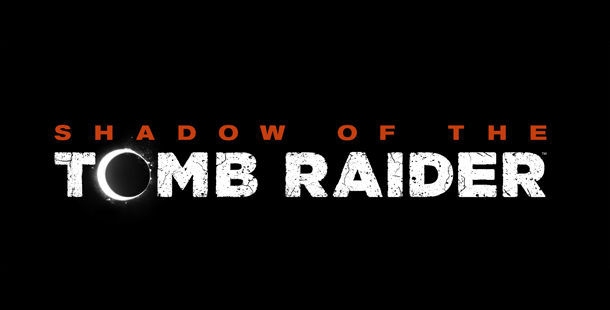 Later this week and early next week I’ll be publishing a pair of video interviews with a Gameplay Systems Designer and Producer from the game.

Spoiler Warning: The following hands-on preview discusses the ending of Rise of the Tomb Raider and how it affects Lara’s motivation towards the villans in Shadow of the Tomb Raider. Both the events of RotR’s ending and the identity of SotTR’s villans are discussed at length. Several names and events have been blacked out to help readers avoid spoilers.

I got the chance to go hands-on for Shadow of the Tomb Raider’s beginning hour during the reveal event in Montreal, Quebec last week. My play session kicked off approximately 15 minutes into SotTR’s campaign I was told by one of the developers at the event. Lara alongside Jonah – who players of Rise of the Tomb Raider should recognize – find themselves hunting down a set of Mayan relics before the Trinity Organization can get their hands both the Box and Silver Key of Ixel Chel.

Legends say that by using the mystical power contained within the Box in combination with the Key, the holder of both Relics can reshape the world. This transformation takes the shape of a powerful world shattering Earthquake, a massive volcanic eruption and a drowning Tsunami. While Trinity’s intentions with these devastating powerful forces is not made entirely clear – surely they will kill a lot of the Earth’s population in doing so.

Avoiding an apocalyptic scenario isn’t the only thing at stake for Lara Croft in this third entry of the rebooted franchise. Given how Rise of the Tomb Raider ended – after Lara spending the entirety of RotR processing the suppressed memory of her father’s suicide, it is revealed that the Trinity Organization orchestrated his death – there is a personal factor driving Lara’s determination to see things through to their conclusion. SotTR’s antagonist, Dr. Dominguez who heads up Trinity will pose an equal intellectual, as well as physical challenge, to both Lara and Jonah this time around. Perhaps it is Crystal Dynamics / Edios Montreal’s intention to have the player question whose approach to averting the Mayan apocalypse is best? – if a disastrous power is going to be unleashed upon the world should it be used in a way that allows some of humanity to live? 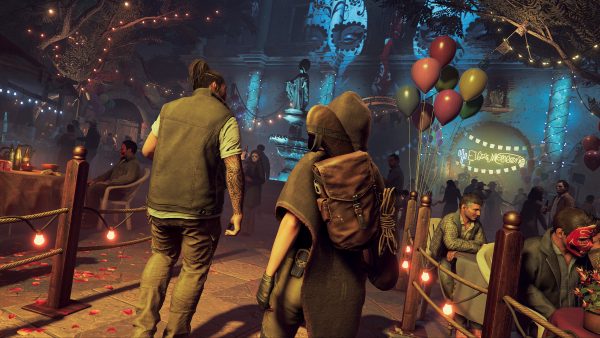 My demo began with Lara and Jonah arriving at a South American festival that gave off a vibe similar to that of Dia de Muertos with banners, fireworks and attendees sporting skeleton face paint. To hide her identity Lara dons a hooded poncho and a partial Skull Mask that, to be honest, looked absolutely amazing on her! Our heroes must stay hidden from Trinity security forces all while gaining access to one of the organization’s Dig Sites in order to find out where the Key of IX Chel is located. As Jonah distracts armed men by approaching them and asking about an on-going party, I guided Lara through the city streets, which acted as a basic movement tutorial.

Things opened up as I progressed through the Dig Site, with SotTR prompting me about the basics of stealth – hiding in bushes, watching enemy alert statuses – as well as a basic primer on how to run and gun my way through a given situation. Hiding in the lush South American brush and striking guards from close quarters is just as exhilarating as it sounds. Towards the Dig Site’s conclusion I decided to change my approach and use the small sub-machine gun that Lara came equipped with to dispatch the remaining patrols. 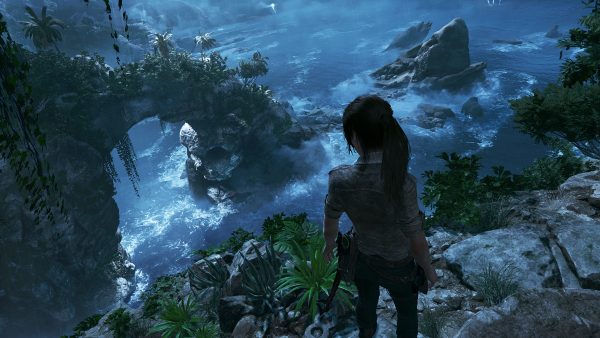 Gameplay seamlessly shifted things to the first real Tomb of Shadow’s first hour – “Hunter’s Moon” – which saw me utilizing Lara’s climbing expertise to effortlessly climb and repel Lara into the once hidden temple belonging to Ix Chel (when I wasn’t missing the button prompt to connect two jumps together and falling to my death). Rope Arrows from the previous two titles where key to solving a quite ingenious puzzle involving an abandoned mine cart and a wench. Without giving away the solution, after solving the mine cart puzzle and another clever puzzle involving large weights Lara finally had one of the two coveted Mayan artifacts in her possession.

This is where things went from standard action movie fare – as seen in the previous two titles – to nearly world shattering. A ginormous tidal wave quickly engulfs the cavernous tomb and sweeps Lara out and onto the city streets. What follows is an almost indescribable amount of devastation as the large wave carries Lara, innocent pedestrians, cars and anything not firmly cemented into a foundation along with it.

As the water subsides and Lara rejoins Jonnah for the first time since the opening minutes of the demo she surveys the sheer damage the tidal wave has unleashed. Suddenly the roaring blades of a helicopter come from behind and within an instant the duo are face to face with Dr. Dominquez who promptly swipes the dagger of Ix Chel from Lara’s possession without a grandiose speech or monologue – RoTR’s Konstantine, he is not. 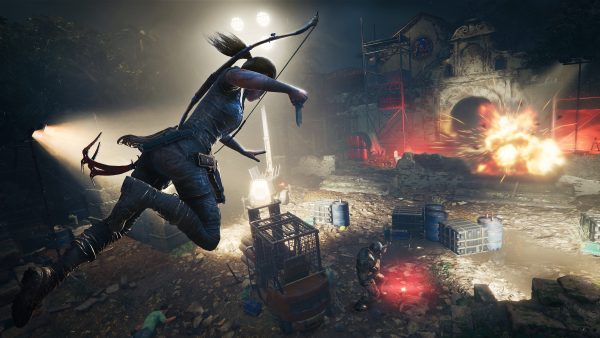 It is here in the closing seconds of SotTR’s first hour that the impact of all of this destruction catches up with Lara. I could see the anguish and guilt stricken across her face as she begins to plead with Jonah to go on to the next dig site and capture the box before Trinity can. It is here the Jonah snaps back at Lara in quite an unexpected fashion – essentially saying “Not everything is about you Lara, you want to act on a myth and a scrap of information when the people HERE need us. We can make a difference here.” With just a few short sentences he bring’s Lara’s attention back to devastation caused by the removal of the Key and away from her larger quest – reminding her of the human cost that can come when the stakes are this high.