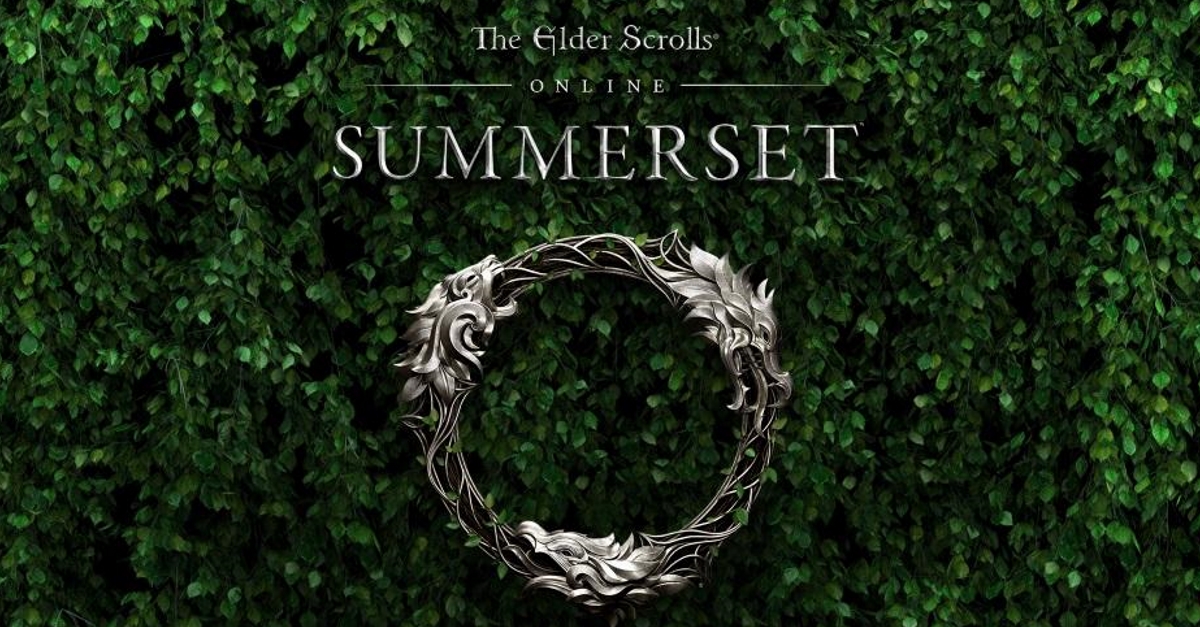 The total playable area of Tamriel grows larger with the early access release of the Summer Set Isle expansion for The Elder Scrolls Online. Bethesda provided me with a closed beta code which allowed me to venture onto the once closed island belonging to the High Elves. Join me for tales of adventuring and exploration through my first couple hours within this seemingly tranquil island paradise.

As my adventures in Summerset were taking place on a closed testing server I wasn’t able to bring my existing level 45 Nightblade over from the North American region. No access to all of my gold? I can’t use my awesome wolf mount? – these are the thoughts that raced through my mind when presented with the character creation screen but there was an unintended upside to all of this – it allowed me to see how the new player experience differs on the Summerset Isles when compared to the base game or the Morrowind Chapters.

I quickly drew up a Templar Breton named Melissa Winterhold (haha yeah, I know – I’m REAAAL inventive taking a last name from a settlement in Skyrim. It’s not cannon but *shrug*) and I was on my way to the brand new tutorial area – trapped inside the mind of a horrifying creature! I found myself quickly and organically going from one key gameplay mechanic tutorial to the next. This hazy purple dreamscape does provide waypoint markers for new players but for the most part they are unnecessary. During the tutorial ESO guides you throw using basic spells (if you know any – or abilities in their place) and picking up several pieces of gear before slaying a couple of rooms of ethereal magic spiders. All of this culminates in a final showdown with a larger spider which acts as a sort of medium difficulty single add to test new players against. As I hear a distance voice calling out for me the screen fades to white. One strong criticism I have of the new player experience found in Summerset Isles isn’t found within its writing, mechanics or presentation but the choice of enemy. For someone with arachnophobia this tutorial would be completely unplayable and terrifying – they really could have chosen a better selection of enemies than a large number of arachnids. 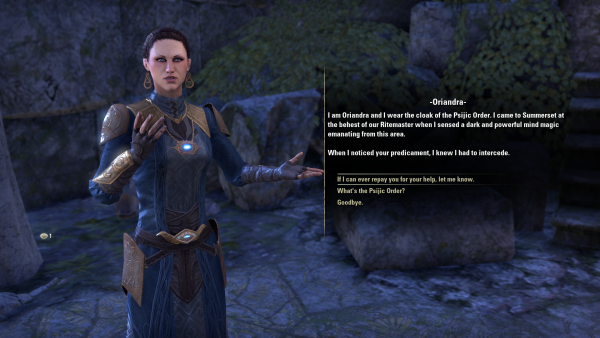 Once back in the ‘real world’ Oriandra from the Psijic Order (Summerset Isles brand new class) explained that she was already in the neighbourhood (relatively speaking) and once she felt a dark / powerful presence she had to investigate. Members of the Psijic order once served the rulers of Tamriel’s larger provinces before splitting off some time ago. It is also revealed that the order is several centuries – so old that they consider the well-established Mages Guild to be nothing short of a nascent upstart in comparison.  My interaction with Oriandra did not make Melissa a member of their order but it did leave one lasting impression – the Psijic Order deal in very powerful Magick and even they are not strong enough to deal with the dark power of this expansion’s big bad, K’Tora.

Now that Melissa had most of her starting gear, a few skill points spent on both an offensive spell, a slow spell and a self heal it was time to embark on my first story quest in Summer Set – The Queens Decree. Queen Ayrenn, who some players might remember from her quest chain in Auridon, has decreed that the island of Summerset is now open to the public. It’s not just sell swords, adventurers and thrill seekers who can come partake in the majesty of the isle but also commoners like the many farmers, blacksmiths and others who populate the world of Tamriel. (Side Note: a lot of ‘high fantasy’ uses the trope of regents or nobles as an authority figure that task players with quests. In my opinion, it’s played out and tiresome. Seriously do the people of Tamriel really need to elevate royalty? There’s more commoners than royals #CommunistRevolutionInTamrielNow… seriously). Anyways, there’s a whole host of monstrous beasts that roam the isles and it’s not such a safe place. 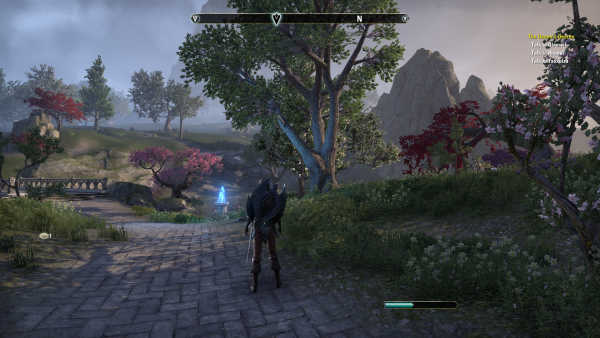 Next up on my quest… to heh, continue the Queen’s Decree quest was a quick meeting with Razum-Dar who some veteran players may remember from the Auridon Quest Chain among others. As an agent of the Queen’s intelligence service Raz always seems to find himself in the thick of things despite his assertions that he is a “simple Khajiit”. Raz informs me that he has seen a pearl that was able to call out to the monstrous wildlife and that rumors about its existence have made their way up the kingdom’s chain of command. Tasking me with gauging the mood of the nearby settlement of Shimmerene, Raz bids me farewell and goes about his other business.

Ignoring the pleas of the rather determined cat, I decided to put my quest on hold and travel down the eastern shore of Summerset for the next hour or so. I wanted to get a feel for what new ravenous wildlife Zennimax Online had cooked up for players with this expansion. To my surprise and delight, it’s not more spiders or simple re-colors of existing mobs either. Scaled deer like mammals called Indrik’s charge head first into Melissa’s shield. Large crocodile-like reptiles called Welwua swim freely throughout the many eastern lakes and rivers of Summerset. Lastly the fire-breathing Salamanders with their glowing black and yellow bodies stood out to me because of the sheer challenge that they posed. Get two of them together and you’ve got yourself a barbecue… of pain. 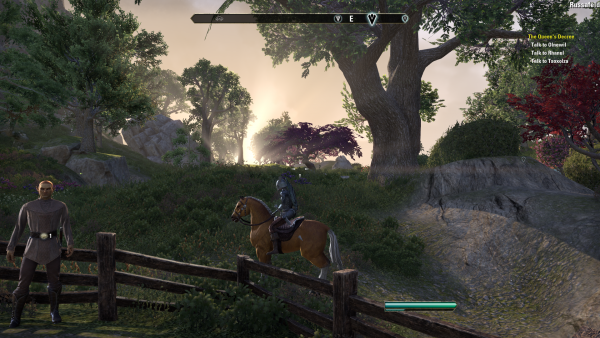 There is so much content to be found within The Elder Scrolls Online: Summerset Isles that I couldn’t possibly convey in a single post. Expansions often bring injections of new content, refreshes of older content and a brand new storyline and from what I’ve played so far Summerset Isles ticks off all of these boxes with ease.

Now that Early Access has begun on the retail servers there are so many things to explore – Joining the Psijic Order and completing that quest-line, explore the 7 public Delves, trying to find all of the Abyssal Geysers (which replace the previous Dolmans in this expansion) and of course – learning the new crafting style.

With so much to do, expect further blog-style diary entries in the near future.

Bethesda Public Relations provided a preview / review copy of The Elder Scrolls Online: Summerset Isles for editorial purposes. It is valued at $39.99 USD.