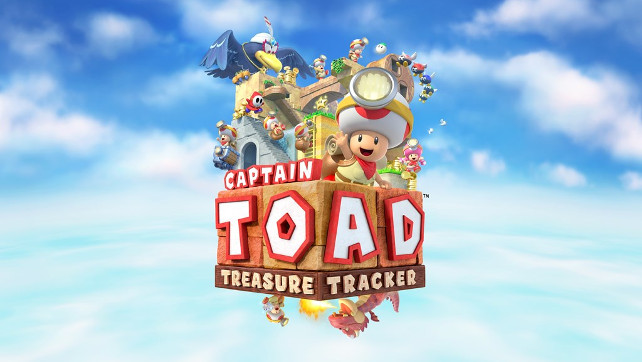 Captain Toad: Treasure Tracker, which originally launched for Wii U back in 2014, has been ported and released for both the Nintendo Switch and the Nintendo 3DS. While some have been critical of Nintendo for doing this with several of their games from the Wii U era, I’m grateful for the ports. Captain Toad is one of the games that I had always been interested in and had been meaning to play, but for one reason or another never got around to checking it out. And let’s be fair – it’s unlikely that I’m going to go back and look for a Wii U copy of the game. With the limited battery issues I have with my Wii U gamepad, that system isn’t seeing much use these days.

Captain Toad: Treasure Tracker is a puzzle platforming game where you take control of Toad. The game’s narrative is split up into levels which are strung together in a book. The game starts off with Toad and Toadette finding a power star before the monstrous, greedy bird, Wingo grabs the power star and Toadette along with it. It’s up to Captain Toad to reclaim the treasure, Super Gems, and Power Stars and save Toadette.

Unlike the play style of Mario and Luigi, you won’t be able to jump with Captain Toad. Gone is the play style of hopping to and fro and you must instead figure out how to reach the goal and capture the power star. Here’s a tip – you’ll be doing lots of running around and away from enemies.

With the game coming right around the time of Super Mario 3D World, the look and feel of the game is taken right from that game. You’ll find many enemies from 3D World, and some of the game mechanics from classic Super Mario Bros. 2 are in here as well, like plucking up turnips to throw at your enemies. Though it’s ironic since, in Super Mario Bros. 2, Toad could jump the highest of all of the playable characters. 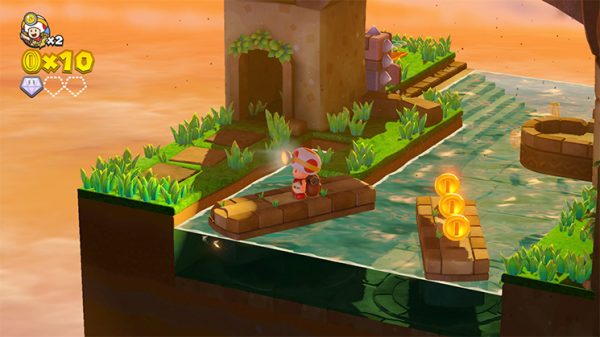 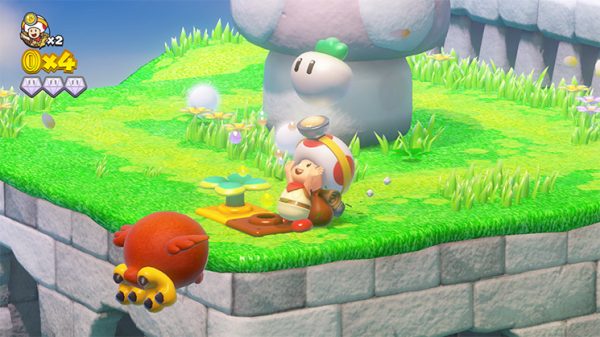 The game is also filled with a lot of classic, retro, and iconic Super Mario music which is great. There is also plenty of new and unique music in the game, which is also very well done.

The game has a lot of content and is full of quite a few levels to play through. Actually after you finish what seems like the end boss level of the game, a second book opens up with even more levels to play. And (spoiler) you’ll get to play as Toadette through the second book. Each of the levels you collect not only the power star to finish the level, but also three power gems are also hidden in the level. They aren’t essential to beat the level, however later levels need to be unlocked with these gems.

Each level also has another optional challenge objective, like finding a hidden item, getting through a level unseen, or collecting a set number of coins. These optional tasks add to the replay of levels. There is also another “Find Pixel Toad” challenge for each level where you replay the level without the power star as the end goal. To complete the level you’ll need to spot and tap the tiny pixelated Toad. He can be surprisingly tough to locate, but when you’re close you can hear him call out.

As with many adventure games in the Mario series, there are a wide variety of level types in the game. There are underground levels, underwater levels, and of course ghost house levels.

Captain Toad: Treasure Tracker was released for both the Switch and 3DS with the former having some small control issues to deal with depending on whether you’re playing in handheld or TV mode. For example in the game you will come across cranks which you will need to turn to rotate parts of the level around. When Toad is on the right spot a large crank wheel will appear in the centre of the screen. If you’re playing in TV mode you need to hold [ZR] and rotate the right analogue stick. When you switch to handheld mode, for some reason you can’t use this control. Nothing will happen if you do this. Strangely you are forced to use the touch screen, similar to what you would do in the 3DS version of the game. It’s really awkward to let go of the Switch with your right hand to do this motion.

Another oddity between the two modes, when you are in TV mode you can set the camera to react and move around with the gyro sensor so that you can move the camera by moving the whole controller. This can’t be done in handheld mode which makes for a frustrating adaptation when you go to handheld after playing in TV mode for a period of time.

Other than these minor control oddities, the game is pretty slick and fluid to play. Maneuvering Captain Toad and Toadette around the level, and moving the camera up and around the level soon becomes a breeze. 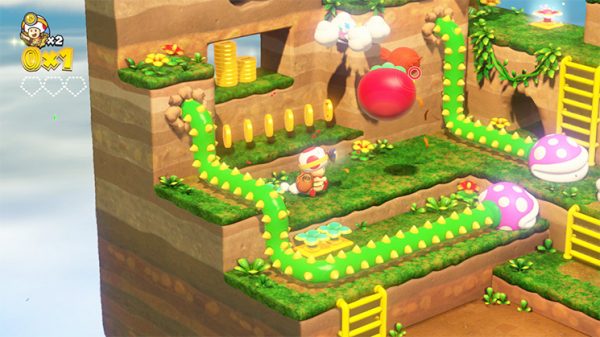 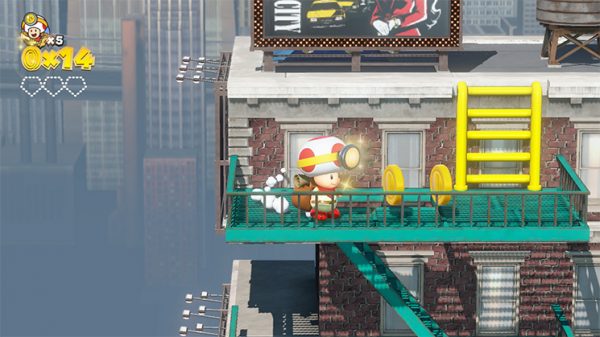 A new addition to the Switch/3DS version of the game includes new miniature courses based on various Kingdoms in Super Mario Odyssey. They can be unlocked with Super Mario Odyssey amiibo or through regular gameplay. The Toad amiibo can also be tapped in game to unlock an invincibility mushroom into the level. All other compatible amiibo figures & cards can be tapped any other compatible amiibo to receive an extra life.

The game also has a two player assist mode thrown in with use of both Joy-Cons. The second player can stop enemies, move objects, and throw turnips at enemies.

If you’re not sure which version of the game to check out there is a demo for both in the Nintendo eShop. And to top it off, both the Switch and 3DS versions of the game are the same price of $49.99 CAD. I’m impressed that Nintendo chose to give this Switch title a value price and not charge the standard $79.99 CAD for a first party AAA Switch title.

Captain Toad: Treasure Tracker is great fun to play. It feels oh so familiar and yet so different at the same time. The levels are classically Super Mario 3D World and are both fun and challenging enough to keep you interested.

I never played the Wii U game but #CaptainToad is surprisingly fun and addictive.#NintendoSwitch pic.twitter.com/HHdYO9nWTS