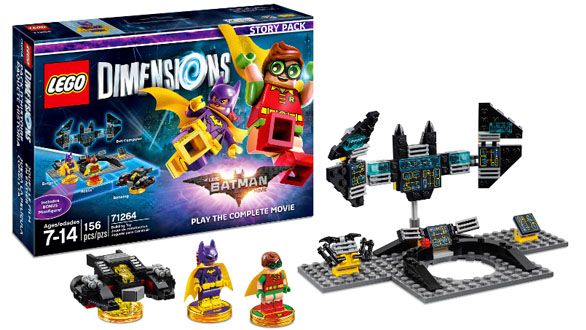 The LEGO Batman Movie story pack comes with a physical Batgirl and Robin minifig. You know, that cute lovable dorky Robin from the trailers? Not just that but you also get a Batcomputer setup to build for the LEGO Dimensions Portal as well! So it’s a replacement portal like the previous story packs included. Also included is a new 3 in 1 vehicle, the Batwing! It can also be rebuilt into The Black Thunder and the Bat-Tank.

Also like the previous packs you receive six all new levels AND an adventure world to explore. Plus of course there is a battle arena unlocked as well for multiplayer.

Released as well today was the Knight Rider LEGO set! It’s just a fun pack, but so was the A-Team set which contained an immersive adventure world is just full of content and references to the TV show. One of my favorites, the Gremlins team pack was also a wonderful experience from the classic movie to explore the adventure world of. So you can bet Knight Rider is going to be a trip you’ll want to buckle up for.