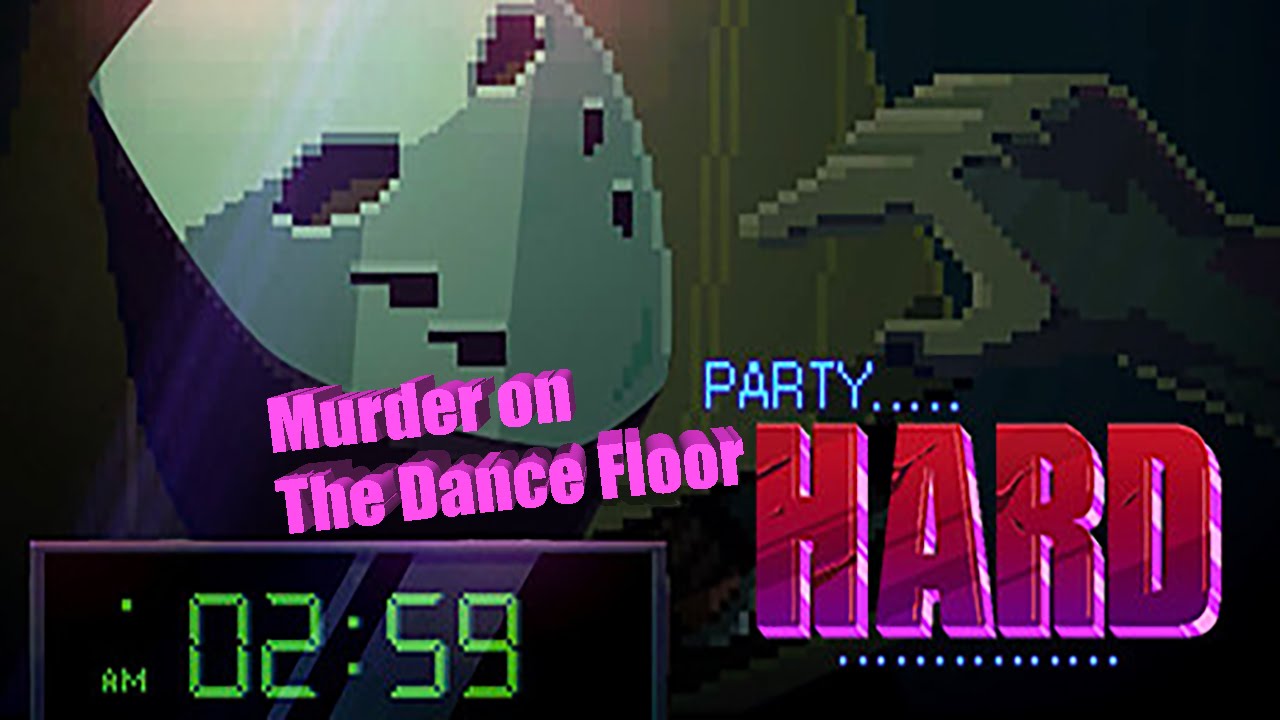 Do your neighbors annoy you? Do you like killing? If you answered yes to either of these, you might like Party Hard. Ill set the stage for you. You’re a masked serial killer just trying to get some sleep. Its 3am and your neighbors are really, really, loud. So you kill them, all of them, while they party.

That’s basically the whole game. But its all wrapped up in a really great package of pixely carnage action. It also has a ton of environmental things to play with. So Enviroment + killing + stupid neighbors = a fun action game. It all seems pretty simple I’ll admit but what it adds up to is more than the sum or its parts.

The game doesn’t have so much of a story as it does a singular purpose. Stop the noise. But this isint madness interactive (vaunted flash game of the 00s), no your not going to be blowing people away with a vast array of weapons and explosives. Instead its all about the planning, patience and carefully laid traps. 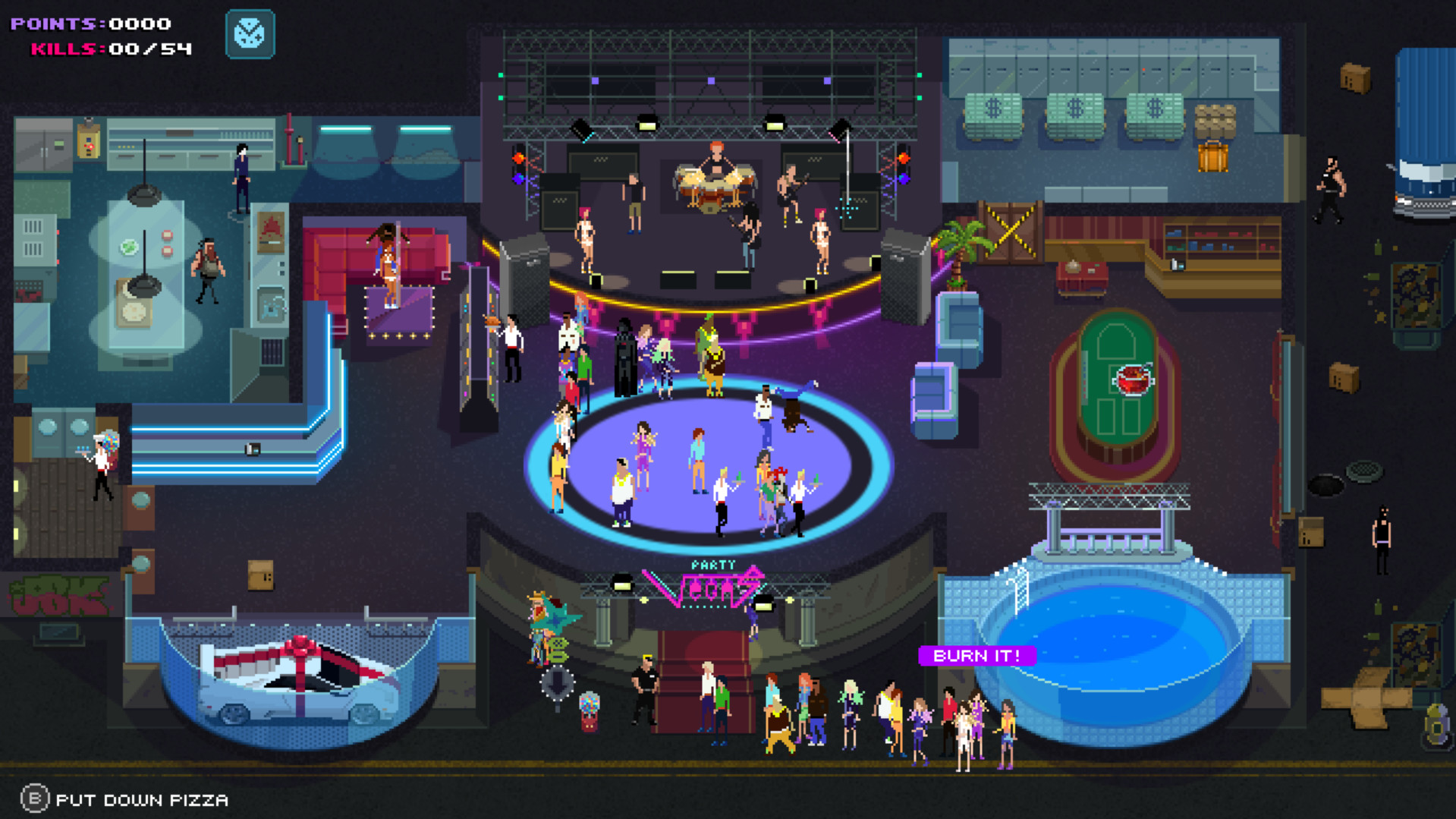 Look at all these loud people. Better kill them all

Each level starts off with you outside a house full of excited partying people. These people are all busy with their own stuff, they are drinking, getting lewd, smoking drugs. Whatever you do at parties.  Your job is to kill them all. But this isn’t hit man, you don’t even have a gun. You’re going to need to kill them with smarts, and well laid traps. Rather than brute force.

So how do you kill them then? Well there are a lot of options. You can set up traps, you can stab people, you can lead them to poison themselves. There are dozens of ways. Levels get more difficult as you go, primarily by having more people around you, and less traps. A good example of one of these traps is setting a stove to blow up, or poisoning the keg.

Each level also has random events that trigger when you are on the level. So you might get a dark coated man who gives you an item, or there might a drug deal in the back that provides chemicals or weapons.  The cool thing is that these seem to be random, and so you can end up having almost anything happen in almost any level.  You can expose the drug deals as well, and this also casuses chaos, with the police showing up and shooting everyone.

The police are as much of a problem as a help in this game, when you start killing people. So once you kill people with your knife, the most basic of tools, you will be able to expand out to more exciting things. Like setting down a stun bomb you got from that strange in the overcoat, or poisoning the keg.

The game features a great soundtrack of intense EDM music. Exactly what you would expect at a party I suppose. The game really feels methodical. You cant just run in and start stabbing everyone. Careful planning and attention to available environmental traps is important.

The game is played from the top down, similar to that other slaughter fest that is Hot line Miami. If Hotline Miami is a game of speed, this is a game of chess. Its slow and methodical. It has some hectic moments sure, I misplaced kill can result in you running after someone trying to stop them setting up the alarm. But those are rare moments. Most of the time your going to need to carefully plan out where and when you kill people.

Hitman penalizes you for killing, this game rewards you. In each party there will be a large number of people, your job is to kill them. You can set rooms on fire, blow things up, use poison whatever, doesn’t matter. As long as they end up dead. I found myself mostly stabbing people because that was easiest. I also used a lot of poison and one or two explosive traps, since those tend to get a larger number of people at once. 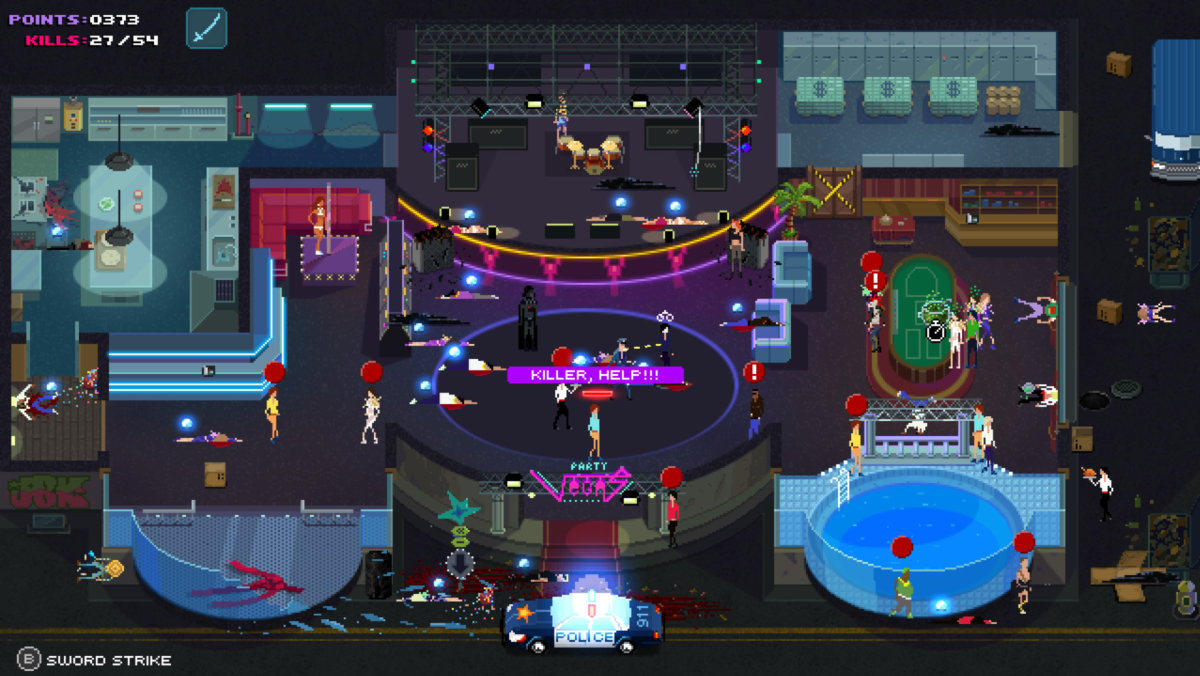 Just about halfway through now

Is there any story?

The games story plays out in between each part, where a hard boiled detective will try to track you down. Each of these little vignettes is a refreshing breather from the intensity of the part with its nonstop EDM music. Both the cut scenes and the game are in a pixel style.  I like the pixel style because it plays down the gore a bit. Partiers can still explode in to pools of red blood and bits of things, but since they are pixelated its less offensive.

This is a punishingly difficult game, several times I ended up getting caught and losing the level. This results in a total start over, no check points. On a level where you might have to kill 40 or 50 people it can take 20 minutes to carefully lay everything up.

Each level is well designed, with a lot of rooms with doors that close, exit points, and traps for the party goers. Sadly this is where we start to end up with a problem. Levels are different in layout, but all of the goals are the same. The game has one one goal, and you are the lone agent of that goal. 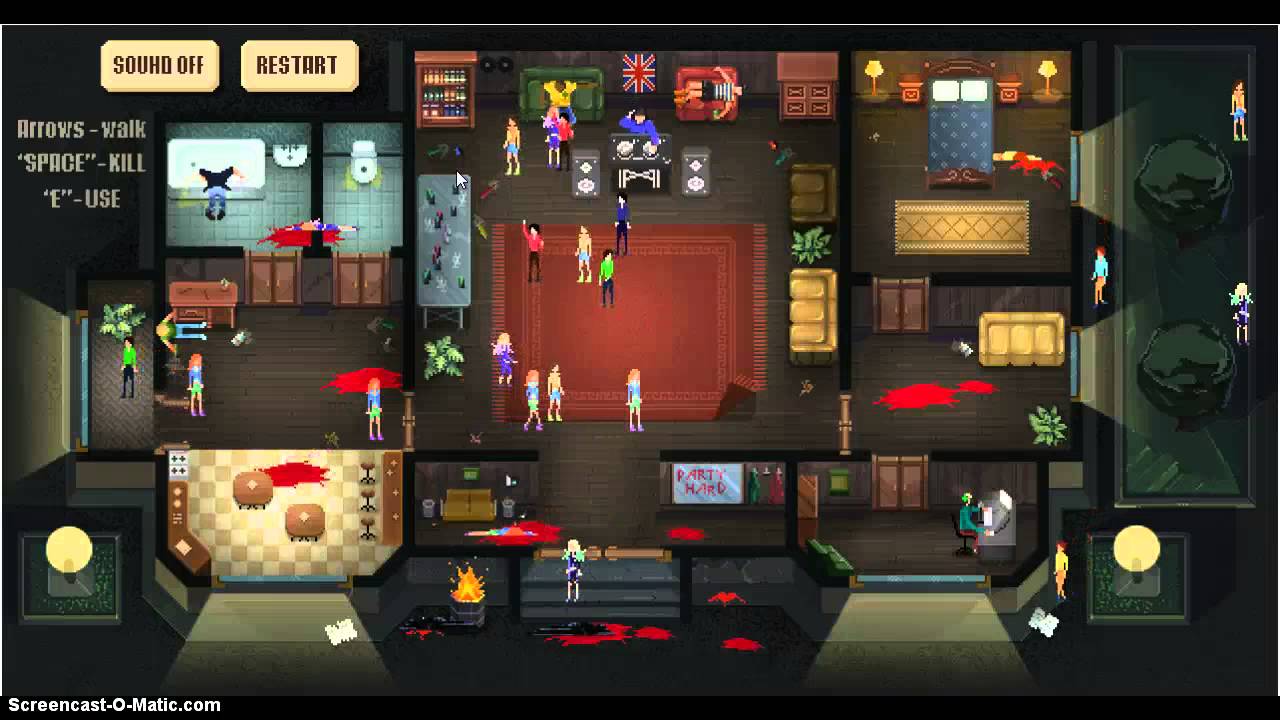 The Games first level tell you the controls, there are three you can see them all on screen here.

I do have to say at least one bad thing about every game, so for this one I am picking its length and lack of diversity. Though the levels change, most players will quickly fatigue with having to kill two or three dozen people without being caught. Killing so many works well in games like Hot Line Miami because of the frantic pacing, but this game features a much slower methodical approach. Much time is spent simply waiting. Waiting for one person to walk away from the group to kill them. Waiting for a planted bomb to be in just the right place to go off. Waiting for the police to arrive, search, and then leave. It is for sure a waiting game.

There are also some great moments as well. When you plant the bomb in the right place, and it kills half a dozen partiers, when a cop car screams up and kills 4 or 5 with no care at all. Some moments feel fun and unplanned. One level featured a meth lab in the back, and totally with out my prompting a fight broke out there. This fight caused a fire, which killed many people. Through it all the DJ partied on.

There is even some room for humor, subtle jokes abound. My favorite is the ability to make the protagonist dance to the frantic techo that’s going on all around him as he kills his way through the game.  I found myself often just sort of standing and listening to music. Sadly the game has a few bugs that make it more difficult to play. Invisible phones  have got to be the worst of all of these, as party patrons use phones to summon police. So, if you don’t know when they are coming, you will lose every time. Over all for the price point I think this game is well done and would recommend it.

Other than the eternally slow pace, I have very little bad to say about this game. Glitches can (and presumably will) be patched later on. Many people will no doubt take the timing of my review to be poor in light of recent events. However, I do not believe that this is a game of the type that promotes violence.  Its cartoony aesthetic and lack of any realistic violence make it much less a murder simulator and much more just a fun game. Over all I give this game a buy it rating, it is out now on IOS Android, PC, PS4 and Xbox One.

Brokenjoysticks was provided a copy of the PC version for review.