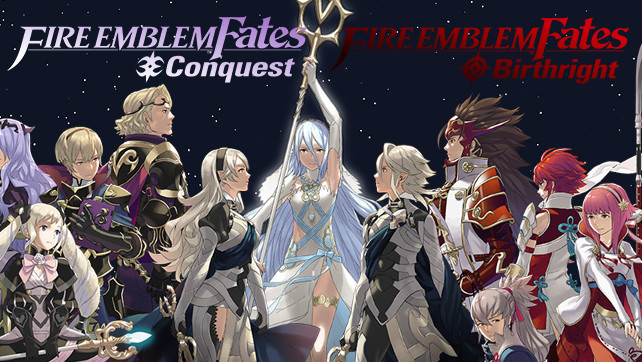 Nintendo of Canada held a special pre-release event in Toronto on Friday evening, allowing the general public to get their hands on the game for the first time. The event was split between Birthright and Conquest, with the separate sides draped and lit in the colours of the respective themes.

The game was playable for a short time on either side, with both games available to play.

Overall the games look and play just like predecessor Fire Emblem Awakening, though there are some minor upgrades to the battles. These are mostly cosmetic, however they look great. Rather than just fading out between the map screen and the battles themselves, this time in Fates the camera zooms right down onto into the battle where you can see your characters doing battle. As well after the battle is complete the camera pulls back to show the entire battlefield.

The way the characters battle within these battles also looks and feels more natural, with more fluidity and more realism.

It’s a very minor and cosmetic thing, but got our attention so it was worth mentioning.

Check out a few photos from the event below, which we tweeted out yesterday. Want more images and screens from Fire Emblem Fates? Check out the Darkain Arts Gamers Tumblr page for tons more! And don’t forget to scroll all the way to the bottom for a brand new extended trailer for the game!

Fire Emblem Fates will be released for the Nintendo 3DS next Friday, February 19th!

Nintendo has a few replica Falchion swords on display at the #FireEmblemFates prelaunch event. #IChoseMyFate pic.twitter.com/c4vgJxnBLb