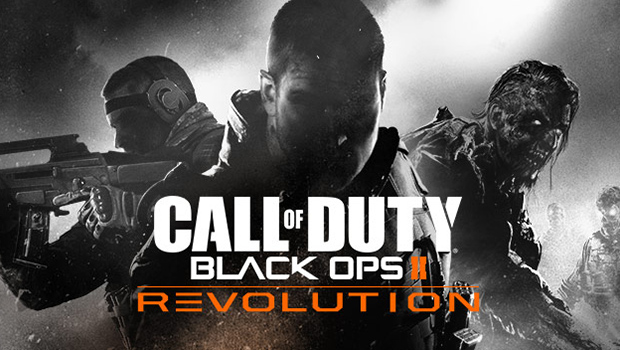 Call of Duty Black Ops II gets its first infusion of fresh troops with the upcoming release of the Revolution Map Pack on Xbox 360 this January. The pack will be released on PC and PS3 on Feb 28 and will cost 1200 Microsoft Points or $14.99 USD on all other platforms.

Want to know what you are getting for your cash? Revolution brings five new maps including Hydro, Downhill, Grind, Mirage and band new Zombies map – Die Rise. Whether you are exploring the French Alps in Downhill, a Hydroelectric Facility in Pakinstan or fending off Chinese zombies in Die Rise this content should keep us killing, collecting tag and prestiging for months.

Activision released a preview video for the new map pack along which you can see below. Head on over after the jump for the full PR text.

Santa Monica, CA – January 8, 2013 – Fresh on the heels of the biggest entertainment launch of 2012 – Call of Duty®: Black Ops II, Activision Publishing, Inc., a wholly owned subsidiary of Activision Blizzard (Nasdaq: ATVI), and their award-winning development studio Treyarch are kicking-off 2013 with the announcement of Revolution, the first massive Downloadable Content (DLC) Pack for the record-setting game. Since the launch of Call of Duty: Black Ops II, millions of fans have taken-on the game’s ambitious near-future fiction, engaged in over 427 million hours of near-future warfare in non-stop multiplayer action, and survived hordes of Zombies. Set to launch January 29 first, exclusively on Xbox LIVE® for the Xbox 360® video game and entertainment system from Microsoft with other platforms to follow, Revolution delivers an unprecedented level of content, and for the first time in Call of Duty® DLC history, a new bonus multiplayer weapon.

“With Black Ops II, the team set out to challenge assumptions about what fans should expect from Call of Duty, and there’s no exception with Revolution,” said Mark Lamia, Treyarch’s Studio Head. “It starts with the massive amount of content that Revolution offers: four distinct multiplayer maps, an entirely new Zombies map and new Zombies mode, and a new bonus weapon. But quantity is just the start – it’s the variety of new gameplay options in Revolution that sets it apart, making it our most compelling DLC offering to date, and a must-play experience for Call of Duty fans.”

Revolution takes players to unexpected new locales the world over. “Downhill” is set in the ski country of the French Alps, where players fight their way down the slopes and through a ski lodge, while avoiding the moving hazards of the mountain’s gondola system. Opponents must dodge the floodwaters in “Hydro” as they contend for dominance of this hydroelectric dam facility in Pakistan, filled with treacherous spillways. “Mirage” pits players in competition amidst the sand dunes of a dilapidated luxury resort in the sandstorm-devastated Gobi Desert, where a range of long-distance and close-quarters combat will mix up the action for all play styles. Finally, “Grind” transports players to the historic birthplace of skateboarding, California’s Venice Beach, where they will battle it out through the ramps and half-pipes of this massive, epic skate park in a multiplayer environment comprised of unique curved architecture requiring players to adapt and learn new ways to take cover. Each map in Revolution delivers a uniquely exhilarating new landscape for tactics and battle.

Revolution also delivers a lethal bonus multiplayer weapon, the “Peacekeeper.” This powerful SMG, accompanied by its own set of weapon challenges for additional XP, is unlocked to all Call of Duty: Black Ops II fans that pick-up Revolution.

Additionally, Revolution transports players to the Far East, where they will attempt to overcome a zombie infestation inside a series of collapsed skyscrapers towering over the remains of an obliterated Chinese city. In this new and original Zombies map, “Die Rise,” players will wield powerful, upgradable Wonder Weaponry as well as combine new buildable devices to fight a relentless army of the undead throughout Escher-esque sceneries over a deep and perilous chasm. And in a twist, Treyarch has added a new game mode, “Turned,” where players can finally complete against each other as a zombie!

Call of Duty: Black Ops II is rated “M” (Mature – Blood and Gore, Intense Violence Strong Language, Suggestive Themes, Use of Drugs – content suitable for persons ages 18 and older) by the ESRB. More information on Call of Duty®: Black Ops II can be found at http://www.callofduty.com/blackops2 or on www.facebook.com/codblackops. Fans can also follow @Treyarch on Twitter.

Treyarch is an industry-leading game developer, wholly owned by Activision Publishing, Inc. whose Call of Duty: Black Ops II set world-wide launch day records, and whose previous game Call of Duty®: Black Opsset an entertainment launch opening record upon its release in 2010 and continues to be one of the best-selling games of all time, according to NPD and GfK Chart-Track.