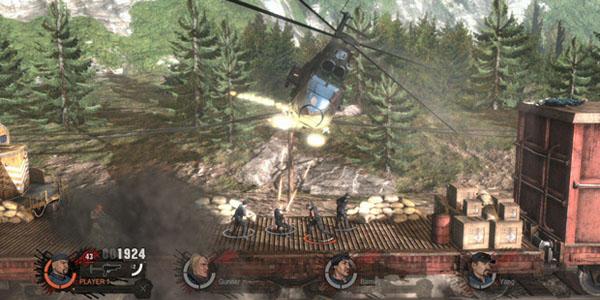 Expendables 2 just hit theatres and to coincide with that release the video game is on XBLA, PSN and PC now too! Available for 1200MSP on XBLA or $14.99 for the PSN or PC version, the game features four playable characters from the movies roster. Barney Ross (Sylvester Stallone), Yin Yang (Jet Li), Gunner Jensen (Dolph Lundgren) and Hale Caesar (Terry Crews) are available for four player co-op. Featuring twin stick combat and vehicular combat sequences too.

Our own Eric Bastelak wasn’t too impressed with the game unfortunately in his review however for hardcore fans of the franchise you may want to check it out just for the story. The video game ends off where The Expendables 2 movie begins. The video game focuses on an adventure to rescue an extremely valuable, kidnapped billionaire.

I’m loving the return of classic action movies and it’s great to see a series with so many big names brought together like this! I’ll definitely be checking out the movie soon, and I’m sure at some point I’ll be giving the demo to The Expendables 2 videogame a whirl too.