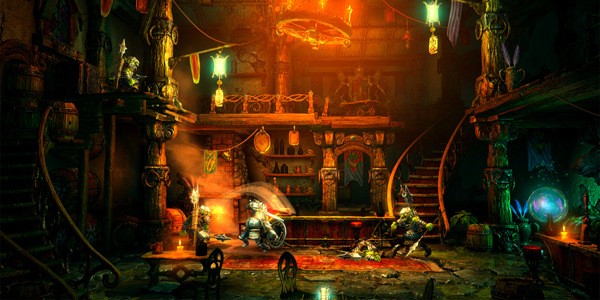 Frozenbyte is expanding Trine 2 with an all new campaign featuring six unique levels, new skills that are also useable in the base game, and all the  general improvements and tweaks will be available to all players. Trine 2 features platform puzzler action allowing you to swap instantly between three different characters.

“Trine 2: Goblin Menace is an expansion that we wanted to cultivate  with a lot of time, effort and love,” said Lauri Hyvärinen, Frozenbyte  CEO, and continued: “We feel this expansion is our best work to date.  If you have a chance, come visit us at gamescom to see for yourself!”

Trine 2: Goblin Menace will debut on Steam in the fall 2012. Trine 2:  Goblin Menace will also be included in Trine 2: Director’s Cut for  Nintendo’s Wii U™ system, coming later this year. More information,  including additional platforms, release date and pricing, will be  announced later.