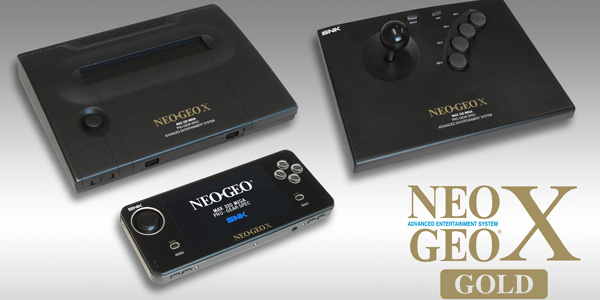 Neo Geo is making a return this December in the form of a portable with pre-loaded titles that can also be connected to a TV. The system itself comes with 20 games which is appropriate for the Neo Geo’s 20th anniversary celebration, a joystick gamepad, handheld device, and a ‘Neo Geo X Station’ to charge the handheld and connect it to TV’s or monitors via HDMI or A/V out hookups.

The system is set to be released on December 6th and retail for $199.99 USD. Neo Geo X Gold is scheduled for a worldwide release. For more details and info on included games, read more.

The Neo Geo X Handheld device features a 4.3″ LCD display, an expandable game card slot, internal stereo speakers, and a 3.5mm headphone jack. The handheld is noted to work with the Neo Geo X Joystick controller. In total the system comes with 20 pre-loaded games as follows: