Simplicity, thy name is Score Rush Extended. For those not familiar with Xona Games‘ previous Xbox LIVE Indie Games entry, Score Rush, Score Rush Extended is a 2D wide-screen bullet hell shmup that while it’s simplistic, it’s fun as heck to play. A lot of shmups I’ve played over the years usually kept getting more and more things added to them to try to keep them unique with their own flair, like upgradable attacks, defenses, various art styles, and so on. While this can keep players playing the game, or back in my day, feeding arcade machines quarters, bullet hell shmups can get overtly complicated. Score Rush Extended does the opposite and keeps overall gameplay quite simple with gameplay, design, art style, and music. 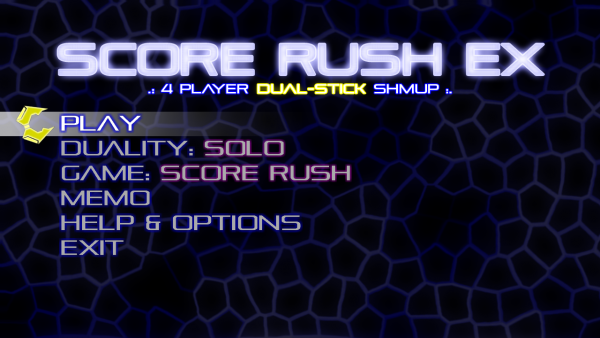 How do you want your bullet hell?

As already stated, Score Rush Extended has simplistic gameplay, which makes the game super-easy to get into and play with the only real thing to worry about is avoiding bullets and shooting all the things! There is no back story to speak of, which just means the player versus the enemies and bosses, or just the player vs bosses with the boss rush game mode. With a limited number of ships to take on all the enemies, the player must take advantage of the slowdown game mechanic with R1, launching the limited number of Nukes at your disposal with R2 in order to get as far as possible before either losing all the ships, or beating the game. Movement is done with the left thumbstick, and firing is performed with the right thumbstick, which works very well with getting to and avoiding enemies. The overall game controls are very tight and responsive, which is absolutely vital in a shmup, and Score Rush Extended executes this perfectly. For combating the enemies, the powerup system will increase the firing spread and strength of the player’s ship until it maxes out covering most of the screen. Any further powerups that are obtained will fire off a red pulse that will obliterate enemy bullets, which can make the difference between life and death in boss battles. In addition to the powerups that can be obtained, there options to grab that will add tail to the ship, giving an additional firing gun. Up to thirty two of these tail pieces can be added to give additional firing coverage. One major thing to watch out for though, is if a ship is lost, all the option powerups disappear, while all the regular powerups will scatter across the playfield to give the player a fighting chance at recovering.

While trying to survive, relentless waves of enemies will come across the playfield trying to make life absolutely hell for the player, especially when there’s a boss battle going on. Nukes and the pulse fire can help make short work of bosses, the Nukes best reserved for later on during a game. One of the few drawbacks to the enemies in this game, sadly, is due to the simplicity, the enemies and bosses can become repetitive. With the proper dedication, the enemy patterns can be memorized, and the game can be cleared in somewhat short work. Once the core game is cleared, the next difficulty setting opens up, giving more of a challenge twice over. Another option of making the game more challenging is choosing the dual ship mode, which will increase firepower at the expense of making the game more difficult. Having two ships at once makes it much easier for the player to get hit by enemy fire, and lose ships. Thankfully, if you’re down to just two ships, if one is destroyed, the other will respawn after a given amount of time. If there’s more than one controller available, up to four local players can join in and make an absolute chaotic party experience and is super-fun. 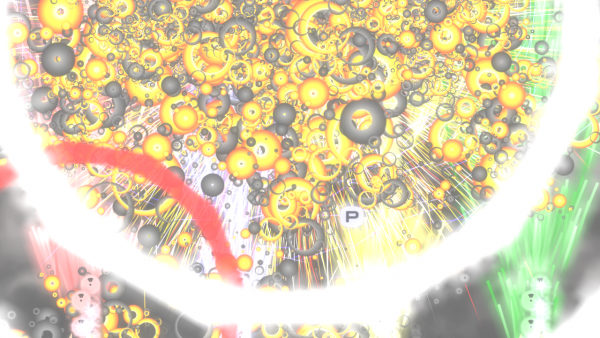 Look at that destruction!

Graphically, the game background is quite basic with greys, but otherwise the game can be quite colorful if the player wants it, or as little as they want from within the game options. Being able to chose the bullet colors is something that really surprised me, as there are a number of color patterns that can be chosen from, such as purple, to dual-colors, to multiple colors. It’s a feature like this that gives the game a really nice touch. The music, by Dragon Music, is quite ambient and fits in perfect with the game. There isn’t too much to the soundtrack, but like the rest of the game, it’s a smaller game, and quick to get into, and finish up with. People who are looking for a deeply-involved shmup with a plethora of features, this game is not for them, but it’s easy to pick up and get into. In addition to everything else, scores are tracked on global online leaderboards to see who can get the best scores on the various game modes and difficulties. The simplicity makes it fun to get into, and the price point ($11.99USD) makes the game quite an attractive purchase, and is currently on sale to celebrate it being recently launched. Overall, I loved the game and I’ll likely be trying to unlock the hardest difficulty for quite a while

Score Rush Extended is currently available on the Playstation 4.