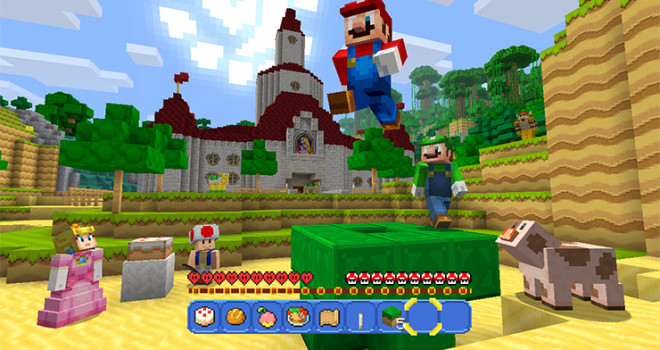 Minecraft: Wii U Edition – Super Mario Mash-Up Pack – Nintendo is partnering with Mojang and Microsoft to bring the imaginative worlds of the Super Mario series and Minecraft together as a free update for those who own the Minecraft: Wii U Edition game. For the first time ever, players will be able to fend off blocky Hammer Bros. and Dry Bones the same way they do Creepers and Zombies. Click here to see the trailer.
PixelJunk Monsters – The classic tower defense game comes to the Wii U system! Play as Tikiman and protect your offspring from hordes of monsters sweeping through your realm. Click here to view a trailer for the game.

PokéPark Wii: Pikachu’s Adventure – Play as Pikachu as you run, jump and smash your way through an action-packed adventure. You’ll travel across land, sea and sky to show off your speed and skill. Travel to all corners of the PokéPark to experience a variety of Zones and Attractions, as well as meet and befriend many Pokémon.

Digger Dan DX  – Digger Dan has found an old mine full of caves, still brimming with treasure. Can you guide him in the right direction by digging through the earth to collect the gems and nuggets of gold? Work out your path carefully as you push rocks out of the way or you could find Dan caught in one of the many traps. As you dig deeper and deeper through the 100 caves, you will uncover secret gems buried in the earth, unravel the mysteries of the wormholes which transport you around the level, blow holes in walls with the abandoned barrels full of TNT and collect pickaxes to release gems that are trapped in rock. Challenge yourself to complete the cave, beat the timer and collect the hidden secret gem on every level.