Broken Bootlegs is a weekly series covering unlicensed games (also known as bootleg games) for mainly 8-bit and 16-bit consoles. This week’s entry covers one of the more interesting Donkey Kong bootlegs that’s available for the Game Boy Color: Donkey Kong 5: The Journey of Over Time and Space.

At first glance, it might seem like an interesting knockoff which deviates considerably from the Donkey Kong Country and Land series. After reading the Engrish introduction, I got the general idea of the game, Donkey Kong’s friend Sodoma, who takes care of all plant life, was kidnapped by someone who didn’t like what she did. Because there was now no bananas, Donkey Kong lost weight and turned into a monkey and now goes in search for her. Sounds fun, right? It would be if it didn’t have bad control response that other bootlegs are known for. 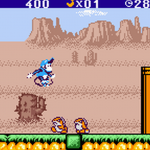 This looks a bit familiar…

With starting the up game, DK looks like Diddy Kong and after playing though a quick bit and getting a powerup, he gets larger and uses a Donkey Kong spriteset. I’m thinking to myself, this level design looks really familiar, and playing though a little bit more, I quickly realized that it’s from Super Mario Bros. From overall level design, to enemy placement, and even enemy behaviour, all of it was taken from SMB1. While I’m not sure if someone managed to hack apart the the Game Boy Color game and made this travesty of a game or coded their own engine, it plays like a harder SMB game due to the aforementioned poor controls. While it can be an issue, there are infinite continues that at least alleviate the issue of having to restart the game due to dying too often. For people that can tolerate playing though the game, one will realize that it’s a bit of a shorter game, totaling five worlds overall. The graphics I wasn’t sure where everything was sourced from aside from the Donkey Kong game sprites, but overall it looks decent enough. For the music, it isn’t overtly annoying or bothersome, and with the sound effects being ripped from Pokemon Pinball, that isn’t bad either. It’s a nice change of pace from some of the other bootleg games that I’ve played, thankfully. 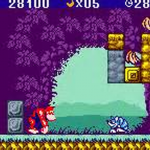 Not too much is known about the developer BBD, except that they developed and published games for the Sega MegaDrive and Game Boy before working on early Sintax games, whom published Donkey Kong 5. As for Sintax, they’ve developed numerous games for the Game Boy Color and some for the Game Boy Advance. As for this game, I would only recommend it if only add to one’s bootleg collection, or for some die-hard DK or Mario fan. Other than that, this is a semi-decent bootleg that may or may not warrant an addition to anyone’s bootleg collections.