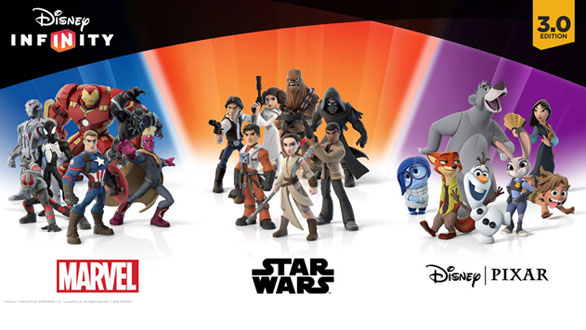 It’s terrible for us to be reporting the news that Disney Infinity has been officially cancelled. The worst part of the story of course is the closure of Avalanche Software and the dedicated folks there losing their jobs. After the upcoming Alice Through The Looking Glass and Finding Dory releases, there will be no more Disney Infinity. The further disheartening news is that Disney is ceasing ALL game development. While it’s great that we may see some new content from studios we know and love, it means they’ll be working on something else besides the sequels we want or new IP’s.

In general, the NFC figure craze has been a difficult one for the industry to focus. LEGO has created a smash hit with Dimensions, and hopefully will continue to produce more products for it now that we’re closing in on the end of their last wave. Nintendo has been successful with amiibo but has struggled to find a way to promote the toys outside of eager Smash Bros collectors. Finally Skylanders has unfortunately floundered this year and needs a successful return and revitalization for this years upcoming release which is still to be announced.

They oddly didn’t do anything new with the franchise, but still really added a really fun game to play. The expansion based on the classic series of movies sees gamers visiting Tattooine at the start. This works as a hub world, similar to the first Disney Infinity release with Monsters Inc. at the school. You’re able to wander around, get missions, and in general have fun around set pieces fans will remember from the movies. I don’t know if the base game of Infinity 3.0 gets to anything like that, but really that’s the quality content that was needed.

Another big issue was the toys being tied to the series. You couldn’t have Elsa running around Hoth with a light saber outside of a ToyBox (the sandbox creation tool for the series). Even basic LEGO games have free play after you beat a storyline level that lets you experience the story with any character. That was the biggest issue. Disney Infinity would be the number one Toys to Life game series right now if it was basically Kingdom Hearts with figures. If the series had that and a larger reason to buy figures, that would have made the franchise epic. The problem was that Disney Infinity was very much created as a children’s game. Which in itself isn’t a problem, but there are so many older gamers these days. Skylanders gets around this issue by being a fun game for many ages.

What Disney Infinity needed was a storyline that allowed you to play as any characters you wanted to. It was a way to get parents to buy more toys. While it may have worked for awhile, clearly it wasn’t enough to sustain the series. LEGO Dimensions gets it right in that with each purchase of a character from another series, you get a free roam world of that franchise to explore. That’s value for your money. There were a lot of misses too. Frozen is massively popular, why was there never a storyline tacked together for an Anna and Elsa playset? Yes, there was the creative element and it was a huge focus of the series for gamers to make their own content, but that shouldn’t have been the focus. It was like an awkward play to gain the popularity Minecraft had when Infinity could have already played upon making an in house Disney edition of Kingdom Hearts with their own properties alone.

So there are many reasons why Disney Infinity was eventually cancelled, but that doesn’t mean it isn’t a great product! You just need to find your own niche in it. It is a sign of the times though as well and shows that the bubble hasn’t burst, but other Toys to Life games need to stay on target. Nintendo needs a reason for gamers to keep buying amiibo, maybe even their own Skylanders concept but with shelves full of Smash Bros. figures, it may be too late for that. LEGO Dimensions needs to continue to produce free roam worlds to encourage gamers to purchase their mini figs. Most importantly, Skylanders needs a reason to buy new characters that carries a lot of value. They’re going into their sixth generation. The audience has grown with them and needs a reason to return to Skylands. It’s time for the games to expand beyond a marketing device because they ARE good games!

We are sad to see Disney Infinity go. It needed a way to find it’s footing and for some reason that never materialized. There was a lot of quality content in the series, but too often it didn’t expand. Yes, it was a series for kids and that did make it okay to stay so focused technically. However if the series had grown, we may still have more Disney Infinity adventures to look forward to.