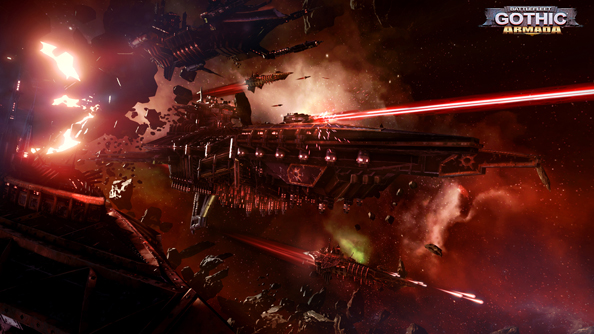 Warhammer 40,000 games are some of my favorite games I have ever played. The groundbreaking RTS Dawn of War from Relic Entertainment is still one of my most played steam games. So when I heard there was going to be a space game set in the 40K universe, it was an instant buy. Now just a few short months away from the release of Battlefleet Gothic: Armada we finally get our first look at the one of the other playable factions in the game: the Chaos. Chaos is perhaps the most dynamic faction in the game, with their ships warping and changing based on which god the are worshiping. Their ships sprout skulls, points, and other marks from their Chaos gods, and those boost their fleets powers. 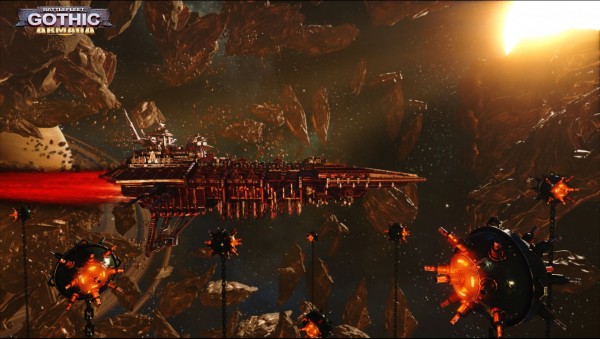 The video details how the Chaos are a bit out of date, but because of their worships of their perverse gods, they get a lot of boosts and are faster, with longer ranges than their Imperium counterparts. The game will feature 4 different Chaos marks, Khorne, Slaanesh, Tzeentch and Nurgle will each give their favor to your fleets over the course of the game providing different buffs. Chaos ships are fast, lighter armed, and feature less armor than the Imperium ships previous trailers showed. Their weapons however are more effective at range and they pack a powerful time stopping bomb to neutralize the imperial fleets torpedoes.

Holy wow, I just can not wait for this game, though its been quite a long wait, Tindalos Interactive is finally letting a few details out prior to the games March release date.  I have watched with baited breath each trailer, each piece of news and new trailer has only gotten me deeper in to the lore and more excited for the games release. Look for our review come release, and hit the jump for the full trailer.