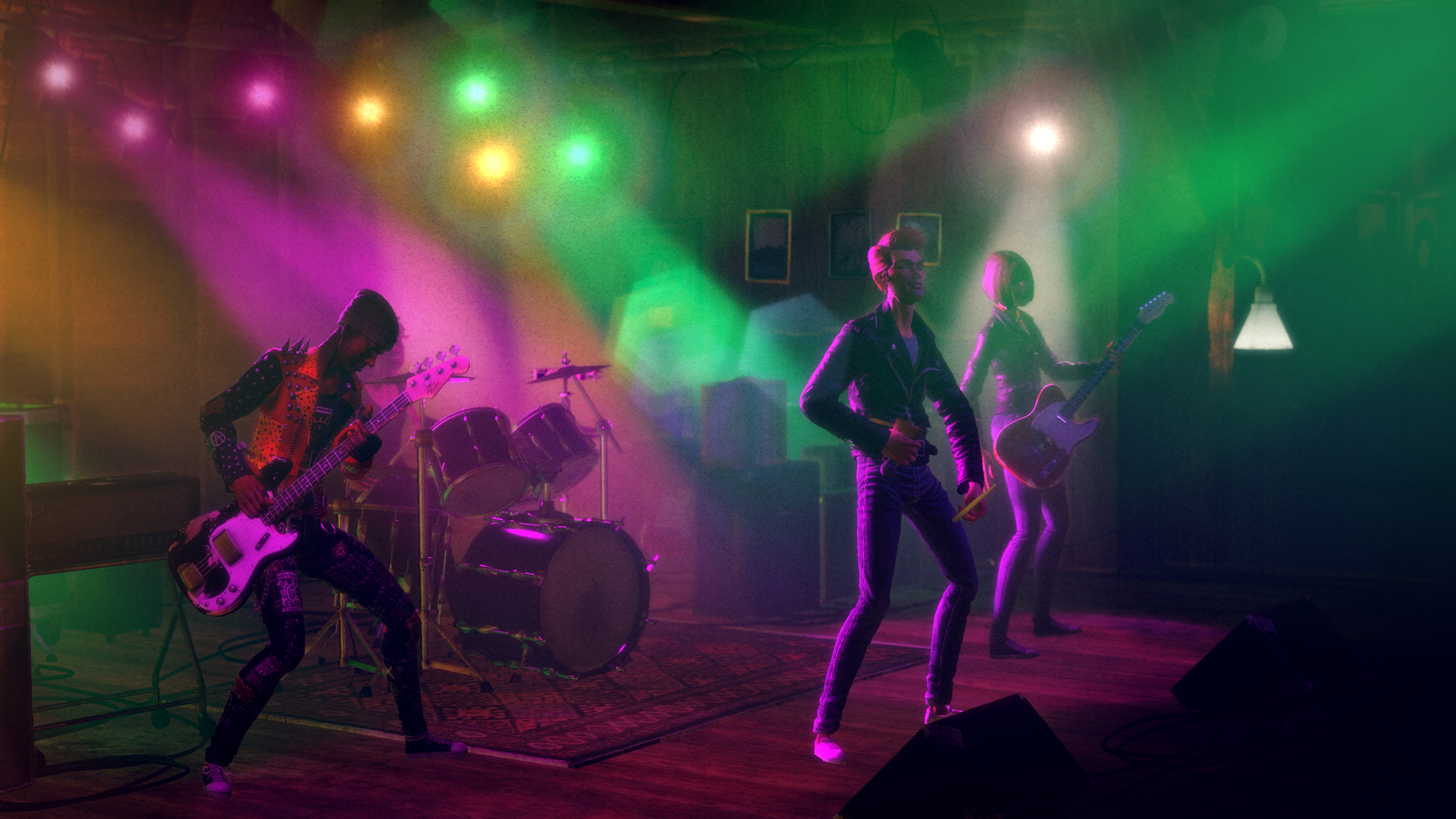 There was a time when the Rock Band franchise was on top of the world and being played by millions of console owners worldwide. Like most celebrity stories an eventual decline in fame is to be expected after a string of successive hits. After nearly five years out of the limelight Harmonix returns with a brand new game for a new generation of consoles. For returning players – like myself – is it time to get the band back together? Or is Rock Band 4 a greatest hits album that you could easily skip over?

At their core all of the Rock Band titles have been about the music, as tired of a cliché that may be. Sure the menus have gotten fancier and the career modes have continued to expand but never have Harmonix introduced a mechanic or instrument that felt like a gimmick or a one-time thing. Instead the Rock Band games have evolved through an iterative process and Rock Band 4 brings to the table a number of smaller gameplay tweaks and visual upgrades that enhance the experience rather than trying to reinvent the game around a single selling point.

Rock Band 4 is played with four plastic instruments – guitar, bass Guitar, drums and vocals- supporting simultaneous 4-player co-op. The experience of coming together with your friends to cover some of your favorite songs with three friends while living the rock star fantasy with flashy graphics and rewarding vibrant colors is hard to pass-up and was a novel experience when the series first hit the scene back in 2007.  I’m glad to say that Rock Band 4 is capable of creating just as much buzz as its predecessors when played with friends. You’re sure to get into at least a few arguments as to which songs is next and Rock Band’s new voting system ensures that you won’t have to scroll through all available songs before you begin your next set. Instead a new voting system allows all players to vote on the next song using a series of vague criteria such as “Play a song by U2” or “Play a Song from the 1980s” – its surprisingly useful when you have a room full of folks waiting for their next big hit. 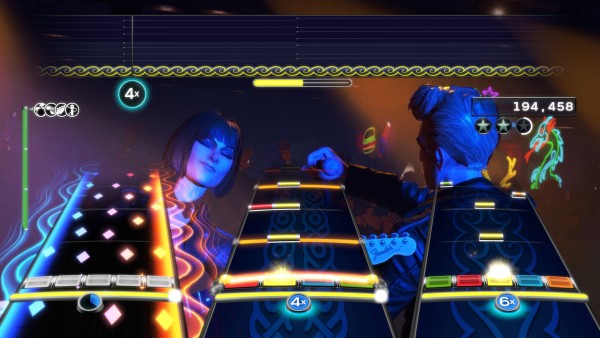 Chances are even if you’ve never played a Rock Band or Guitar Hero title before you’ve seen at least one of their iconic plastic guitars. For owners of previous generation Rock Band hardware RB4 offers backwards compatibility with a number of different peripherals including some from the older Guitar Hero games. During play-testing for this review I used a Rock Band 1 Guitar, Drum Set and Microphone with no problems whatsoever. I simply plugged in the guitar’s wireless receiver or Drum Set’s USB cord and I was on my way. One small hitch may arise if you want to get a complete together however: The PlayStation 4 only has 2 USB ports so you’ll either need the included USB hub or use your own to connect all of your instruments.

If you don’t know how the basics of Rock Band here’s the just of it: Notes scroll down the screen  and when they hit the appropriate sweet spot you either strum your guitar while holding the colored fret buttons or if you are on drums using the provided kick petal and colored pads to smash out your beat. Vocalists must try and sing the selected song within a pre-defined pitch range or they’ll lose their streak and possibly their chance at a high score. It’s a very simple and now time tested gameplay formula and Harmonix made the right call by not fiddling with it too much. 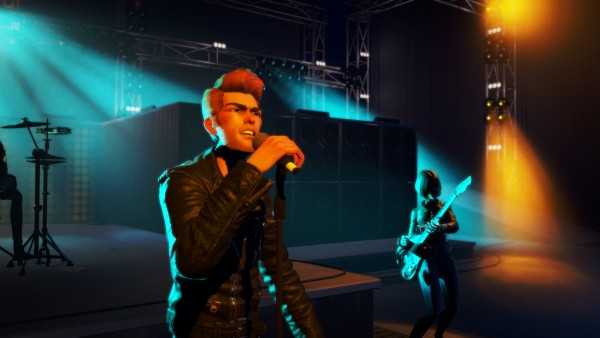 The newest additions in the gameplay department are aimed squarely at the guitar and bass guitar players. With the ability to perform guitar solos guitar players are able to add a touch of their own personal flare to their favorite tracks. Guitar solos contain a number of small components that make up their whole – small licks, long licks and chords. Rock Band will prompt you to perform the right kind of sound using a series of visual prompts. Guitar solos are a nice addition to the gameplay without sacrificing any of the tried and true elements. If you find that Guitar Solos aren’t for you they can be turned off completely in the options menu.

There are several different game modes available in Rock Band 4 including the previously included Quick Play which allows you to jump in and select a song right away. Also returning from previous iterations of the game is the Career Mode which has seen a bit of an overhaul – with the inclusion of choices that will affect how your band raises cash and gains fans as well as the types of shows (songs) you’ll play over the course of your career. The branching Career mode is a really nice touch but you can breeze through most of it within an afternoon or two save for 5-staring every song. Probably the best mode introduced in Rock Band 4 is one of the simplest – “Play A Show” mode allows you to enter in either solo or with friends and play as many songs as you would like without exiting to the main menu, instead using the aforementioned voting system to select new tracks. Simply put “Play A Show” is THE go-to mode for a Rock Band Party. 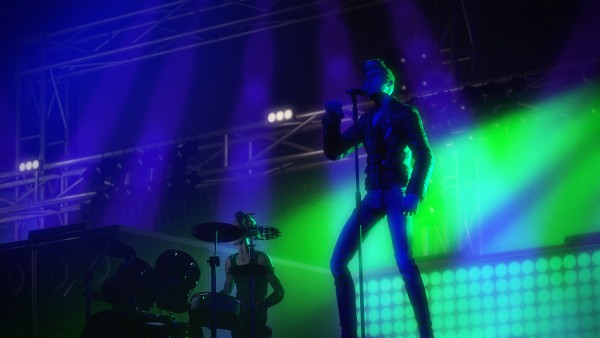 Gameplay is solid? The new modes are interesting? Double check so before we wrap up this review and go on a world tour you are probably wondering how the included 65 on-disc songs hold up. To be completely honest a lot of the major hits from some of the returning acts like REM and The Foo Fighters were released several years ago as DLC and so the material on the disc might not be what first comes to mind when you think of a given band. Given that it has been so long since a disc based Rock Band release new bands have come and gone and tastes have changed a little bit. Rock Band 4 adapts with the time by including newer material from Avenged Sevenfold, Imagine Dragons and U2 while introducing bands like Artic Monkeys who weren’t included in the previous disc releases.

Like compatibility with previous generations of instruments publisher Mad Catz has made a huge deal in the marketing material about the backwards compatibility with previously purchased DLC songs. Considering the technical and licensing hurdles that must have been crossed in-order for this to become a reality there are a few caveats. Your previously purchased DLC will only port over to the new generation of hardware if you are upgraded within the same console family (EG. PS3 -> PS4). So if you jumped ship from PlayStation to Xbox (or vice versa) you are out of luck. During review I tested 30 tracks that had been purchased on Rock Band 2 on my PS3 many months ago. Quite a lot of them showed up and could be played once downloaded to the PS4 but a few did not show up and instead asked me to re-purchase them. Also during multiplayer testing we received several connection errors when connecting to the Rock Band store – which put a damper on the evening a bit. Harmonix has said that they are aware of the problems with downloadable content and will be working on a fix.

If you are a returning player – like me- and have some instruments lying around the house waiting to be used – Rock Band 4 is an easy recommendation. Like previous games the gameplay is solid with a few new unique additions that add to the overall package. I also realize that taste in music is subjective and while I found the included disc based songs to be a little lacking when compared to other games in the franchise there may be titles on the disc you just can’t live without. Compatibility with previously released DLC is a little spotty at the moment and there is a slight chance that not all of your previously purchased content hasn’t made the jump to the new generation of consoles just yet (although depending on when you are reading this review these issue may have been fixed). A larger “band in a box” version of Rock Band 4 is also available at retail and includes three instruments and the game-disc, however I was not provided with the instruments for review. Get ready to rock out, grab three of your best friends because starting a band might be the best idea you’ve had this year and Rock Band 4 offers the complete package for you to live out the Rock Star life.

Harmonix provided a downloadable version of Rock Band on PlayStation 4 for Broken Joysticks to review. If you want to check if your old instruments are compatible check out this page.