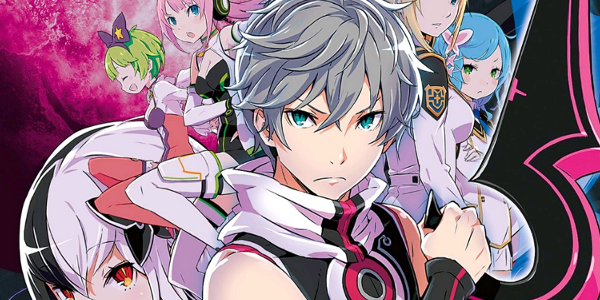 Monsters have invaded the world of Aterra, and only a few special individuals, imbued with the power of the Star God, are equipped to fight it. With only a small group of warriors and a narrow window of time in which their powers are at their peak, the solution is clear: combine your Star power to make magical Star Children to boost up your forces in battle! The life of a student can be complicated when you’re exploring dungeons, fighting monsters, AND trying to maintain a high school lifestyle. Learn to balance your activities because the deeper the bond you have with your classmates, the stronger the Star Children you’ll make! In this stimulating JRPG, you’ll be able to create bonds with 7 different female Disciples and create 24 classes of Star Children, so you must learn how to create the perfect Star Children for any situation. In no time, you’ll have dozens of powerful kids with different skills that can take on everything the monsters throw at you.

Conception II: Children of the Seven Stars will be available on April 15 and a demo is currently available.

The interactive game of LEGO The Hobbit allows gamers to play along with their favorite scenes from the films, and follows the Hobbit Bilbo Baggins as he is recruited by the Wizard Gandalf to aid Thorin Oakenshield and his Company of Dwarves.

A ship has capsized in the ocean, leaking oil into the water and damaging marine life. Play 120 levels as four fish friends as they work to save the inhabitants of the sea in this exciting puzzle adventure! Help the clever clownfish, powerful shark, explosive crab, and serious octopus return the ocean to its clear blue brilliance! Collect power-ups as you explore 12 stunning underwater locations, and play additional fun mini-games. Switch between three different Match-3 game modes and earn bonus puzzles as you progress. The fate of the sea is up to you…will you be able to save your friends in time?!

A beautifully difficult puzzle game. Welcome to Boxzle, a challenging three dimensional puzzle game. Boxzle contains 120 different puzzles, four different puzzle sizes and three challenging modes for you to choose from. Try a new take on the classic sliding tile puzzle or a new twist on an old classic. If those are too easy for you, try them both at the same time!

Travel to the Wild West and turn your fortunes round to become the Governor of Poker! In the scorching town of San Saba begins your journey to becoming the new Governor of Poker in the ultimate Texas Hold’em Up poker tournament. Build your reputation and riches up to take over the whole state of Texas. Stroll through over 10 towns and enter numerous saloons to compete in poker tournaments and cash games to win big and buy up priceless real estate! Blow up some steam and bring fellow Texans to their knees as they bust from tournaments with you crowned as Big Stack Bully!! The stakes are high so play your cards right and grow your wealth to become the one and only Governor of Poker.

It’s the year 2112. Earth has been invaded by the forces of evil. Battle the invaders as you race from sector to sector on your motorcycle, searching for survivors. Feel the incredible sense of speed as you zip past evil Quadrunners and zigzag between treacherous rocks, oil spills and other obstacles on the course. For a different challenge, create your own course in Design Mode, using the various twists, turns and straightaways the game has to offer. Remember, you are Earth’s only hope—you are Mach Rider.

Escape the city before a bombing raid starts by blasting through hordes of zombies that have overrun the streets. Fight your way through the city suburbs and underground parking areas heaving with the undead, rescuing any remaining civilians you find on the way. Use shotguns, magnums, grenades and flamethrowers in your fight to stay alive against a whole city of zombies. For a limited time, Escape From Zombie City will be 50 percent off in the Nintendo eShop on Nintendo 3DS. This promotion starts at 9 a.m. PT on April 12 and ends at 9 a.m. PT on April 27.

At the beginning of the game, all you own is an empty field, a few pennies and a single little ostrich… You need to feed your ostrich, take care of it and improve its lifestyle. Well fed with seed, your ostrich will lay eggs which can then be sold to the Shopkeeper. With this money, you can buy new animals at the Farmers’ Market… 10 kinds of animals to customize! Take care of your animals: food, clean, disease, etc. Many farm improvement to buy and bonuses to collect!

The Mirror World, which exists in the skies of Dream Land, has been invaded by an evil shadow and Kirby’s the only one who can save the day! Fortunately, he won’t have to go at it alone. He’s been split into four Kirbys of different colors, and he can call up his colorful clones to lend a hand when needed. Summon Red, Yellow, and Green Kirby to help you solve puzzles, fight enemies, or take out the big baddies. Use copy abilities such as the arrow-shooting Cupid Kirby or the melee master Smash Kirby, while platforming through the maze-like world. Need a break from the action? Try a hand at minigames such as Crackity Hack and Kirby’s Wave Ride, which also star our favorite pink hero and friends!

Get ready for video games, done Wario-style! Wario is venturing out of the game, and into the video-game making business! And he’d like to put your quick reflexes to the test. Prepare for lightning-quick game play as you blaze through over 200 bizarre microgames designed by a crazy crew of Wario’s cronies! Ultrasimple controls make each game in WarioWare, Inc.: Mega Microgame$ easy to get into…until the games start coming faster…and faster…and FASTER! Think you can outwit the master?

Embark on an authentic Disney adventure around the world to retrieve five legendary treasures with Scrooge McDuck and his three nephews: Huey, Dewey and Louie. Now through 9 a.m. PT on April 17, get DuckTales: Remastered for 50 percent off in the Nintendo eShop on Wii U.

My Farm Wii U Price Reduction