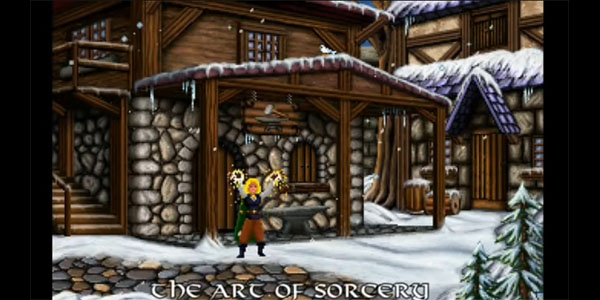 Okay, lets get this out of the way first, Heroine’s Quest: The Herald of Ragnarok isn’t an official Quest For Glory game, nor an official Sierra game. However, you really wouldn’t know it. It’s a beautifully crafted adventure and best of all it’s FREE! If you’re like me, you’ve been aching for more Quest For Glory adventure. While Corey and Lori Cole continue work on Hero-U: Rogue to Redemption to bring us new content from Quest For Glory’s original creators you can enjoy the wonderful tribute to one of gamings greatest series in Heroine’s Quest. Read on for more info and the trailer!

When you first start up Heroine’s Quest, you feel like you’re starting a Quest For Glory adventure. You pick a class (no, there isn’t a paladin class and I’m not sure if you can become one) between Fighter, Mage, and Thief. I’ve only gotten a little ways into the game so far, but the title does seem to focus on playing out how your character would solve the problems presented. Early on it’s apparent that as a Thief, you are indeed expected to steal. The thing that made Quest For Glory so addictive, for me at least, was the stats. I can’t count the number of times I balanced across the training beams in Quest For Glory 3’s Simbani Village. Heroine’s Quest does include stat building too which slide onto the screen from the right (I think it is) like little achievements. So not only did I find them to be addictive before, but now each stat point loads like an achievement? Bonus!

The presentation and story feel like a fresh new adventure. Drawing from Norse Mythology the game presents a unique tale that truly makes this a title from the good old days, even though it was released last December, and more recently on Steam. If you grew up on these games, loading up Heroine’s Quest shuts out the world and really makes you feel like you’re back in 1992 again. Even the art style is low res to capture the classic appearance. The game blends the familiar with the unknown to create such a solid nostalgic gameplay experience, it’s put the breaks on my desire to fly through an adventure. This is a title to be enjoyed and it has that feel.

Crystal Shard, the indie company who developed this game, deserves all the thanks and credit that can be given. Though the game is free, you can even donate on the Heroine’s Quest official page via Paypal. These people really did something fantastic here and it’s worth your time to play the adventure. Back in the day I grew up with the Quest For Glory games, bonding with my best friend over our play throughs. Bringing a fresh take back to that magic is a treat I never saw coming.

It’s free! Why are you reading this? Load up Steam and download this game!