Continuing on from Part One of the Sony Press Event where I was able to check out some upcoming games for the PS3 and Vita. Since the event a couple of these games have already been released, so there will be much more in-depth detail coming up pretty soon on one or more of these fantastic titles.

Without further adieu, let’s talk about video games starting with:

An interesting game for the Vita, that I unfortunately didn’t get enough time with I would have liked. With a distinct anime style this plat former takes a new direction in the gravity controlling type games. The game appears to be chock full of fully animated cut scenes that look beautiful.

The gist of the game from the bit I got to play is your character is able to control her gravity. You press the R button to trigger the gravity control in which the girl you play as begins to float in the air. Then you can use the right stick (or as I prefer the gyroscope) and aim to any other solid surface for her to land on. Be it a wall or a ceiling, your character can land on it.  The small section of combat the game offered seemed a bit shallow, yet still fun. It’s a basic beat ‘em up formula but when combined with the gravity control functionality it becomes wholly something new.

It is certainly not a game you can just play for 20 minutes at a time however. When I started playing I had to start from the beginning and was there ever a lot of story in that first little bit. I was unable to hear it because of the volume in the room but the story does seem interesting. This is a title that, if you own a Vita, you should definitely take a look at it for yourself. 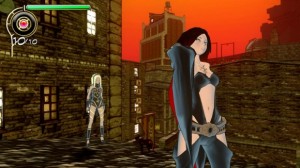 This is exactly what is sounds like. You take your fully customizable Sack Boy, throw him in his fully customizable kart and have him race on a fully customizable track. Despite being a very early build of the game I could already tell that this is the karting game all karting games should be. In this version of the game there were only three tracks available. There was a standard introductory course, then there was a more complex course that involved using hook-shots to grapple other parts of the track over pits. I was told that there will be a lot of these gimmicky stages which sounds like it’ll be a lot of fun. Not to mention the Mario Kart styled item usage. The third track was a battle mode map. It was a score attack, so the goal was to pick up items and hit your opponent with them. There were items such as mines, rockets, and various other fairly generic items. 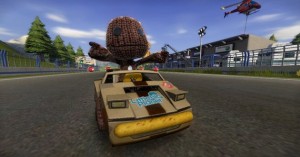 SCE Santa Monica Sudio’s has finally finished their spiritual successor to 2007’s Warhawk – Starhawk.  Probably one of my favorite games of the entire event, despite my only getting around twenty minutes with it. When I stepped into the game I found myself flying a space jet Starfox style against other ships since somebody else had stopped playing it before I stepped in. After that section I was directed to land my “hawk” on the space station I was defending and prepare for another attack.

At this point I was given options to start building. Given constructions such as walls, and turrets I had to build up a base to fight off waves of robotic enemies. As well as about eight more items that I didn’t see at that section of the game.

The multiplayer experience by the sounds of it is where Starhawk will really shine. Especially on the higher difficulties where teamwork will be absolutely required.

This is definitely a title to check out, especially if you enjoyed Warhawk in which Starhawk is the spiritual successor to. 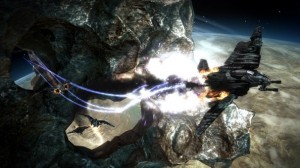 Atlus’  RPG based on the George Martin’s series of fantasy novels “A Song of Ice and Fire”. An interesting fact about this game is that it has actually been in development since before HBO ever got the license to do the TV series. This title I knew little about, so I was pleasantly surprised to find out how good it is.

If it were to be compared to a single game, that would be Dragon Age: Origins. The combat is identical to its Bioware counterpart using the live combat that can be paused any time by opening a menu. However, when you bring up the ability wheel in Game of Thrones the game doesn’t pause, but slows down. Giving you enough time to take your time to plan out your attack, but not so much that you can go make a sandwich.

The dialogue is also very similar to how Dragon Age: Origins, and most Bioware games overall. Not that this is a bad thing in any way. If it isn’t broken, don’t fix it.

The story is where Game of Thrones truly shines. You play as two different characters alternating by chapter like the pacing of the novels. Mors, who is a member of the nights watch. I wasn’t able to see any part of his chapter unfortunately. Then there is Alester, a red mage and a noble of Riverwood who is returning home from exile after his father passed away.

Since the HBO series happened to come out before this title was finished that means that a couple of the actors from the TV series got to lend their voices.  Lena Headey (Cercei Lannister) and Conleth Hill (Varys) in particular.

I guess I should also mention that Tyrion does not appear in the game. So no Peter Dinklage unfortunately. 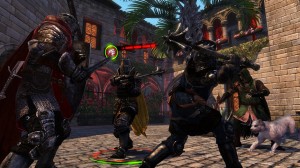