I had the opportunity to go spend a day at a Sony press event where they were able to show off a bunch of upcoming games coming out for the Playstation 3 and Vita. Beforehand I only knew of a handful of titles that were going to be there, so when I arrived and found twice the amount of TVs I was expecting I have to admit I was pretty excited, especially for a couple of the titles that I will talk about in a bit. I’m going to discuss my time with the games and my initial opinions on everything that I saw.

There’s plenty to discuss so read on…

The first game I got to spend time with when I entered the demo room. This also happened to be my first experience with the Vita’s controls fully utilized first hand. Resistance: Burning Skies plays identically to its console counterparts, except with the touch screen elements added in. Such as, to sprint you need to double tap the touch pad on the back. Certain weapons, like the crossbow shotgun I picked up had you slide the touchscreen to load the bolt.

The action is very exciting and dramatic with the developing story that you see in cut scenes (which unfortunately I was unable to hear). I wasn’t really able to get a great feel of the game aside from basic game play, due to that the game was set on easy at near the very beginning. However Resistance is looking to be one of those games on the Vita that you show to your friends to introduce them be it for graphics and gameplay. 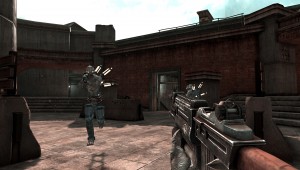 Or you could also show them Metal Gear Solid HD Collection on your Vita. This is essentially a direct console port of the PS3 version of the game except there’s one thing missing, and that’s Metal Gear Solid: Peace Walker. When I was speaking with Konami’s representative at the event while I played he told me that the reason Peace Walker wasn’t included because a) its already a PSP title, and b) they wanted to focus on the main entries to the franchise to be able to show off what the Vita can do.

I accepted his reasoning as being pretty good. Why port a PSP game to the Vita? One fantastic feature that I was informed about with this version of the game is that save files are transferable from the PS3 HD Collection onto the Vita’s and vice versa. So no matter where you are you can keep playing Metal Gear! Another great feature is in the use of the touch screen. To access your inventory you press on the icons in the bottom left and right to bring up the menu, as well, when behind cover you can swipe the screen for your sidling and corner peeking. The back pad can be tapped for a quick stab with the knife for when things get hectic.

Also included are the versions of Metal Gear Solid 2’s Substance and 3’ Subsistence versions of the game. I was really impressed for what I initially thought was just going to be a direct console port. 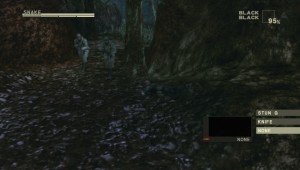 If there is any game that is worthy of the Playstation Move technology, then it would have to be Sorcery. The game was only about a 10 minute demo, but in that short time I was able to get fully immersered in the game. The idea behind the game is that you use the Playstation Move add on and you use it as a magic wand Harry Potter style. Slinging spells and taking out enemies in this third person action title.

In the first level you play you only have your standard arcane bolt. But with it you can cast it like you would throw a baseball. At high and low angles and you’re even able to curve it around corners. At the end of it you gain a shield that protects against your enemies.

The second level you play you’re given a lot more options with the option to use the shield and you have a few spell options. I was given the option to use a fire spell, an ice spell, and a wind spell. To switch spells you have to turn the Move in different circular motions. With the fire spell you either use a powerful close-range burst or you can draw a line of fire which will damage enemies as they come through. You can also switch to your default arcane spell and shoot it through the fire turning it into a fireball. With the ice spell you can freeze your enemies solid and blow them up with the default spell. With the wind spell you can throw it out to push enemies back, as well as create a tornado.

Combat becomes a very exciting battle with multiple enemies that are able to dive out of the way of spells and can cast them in return. Being able to mix all the spell doesn’t take long to get the hang of and is very exciting learning all of the combinations and mix-ups you can use. As well as avoiding enemy spells by using your shield or diving out of the way.

The game fully utilizes the Move. Even when you drink a potion you must first shake it up by shaking the wand, and then turn it upwards like you’re drinking it for you to use it. To open chests you give the wand a good turn. Even to move obstructions out of the way you just need to move the wand. Giving you the feel that you are a powerful sorcery. Hence the name. 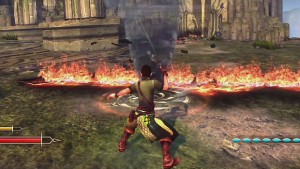 This is the game I hadn’t expected to see at all and was the most excited to get my hands on. Unfortunately, the demo they had was experiencing hardware crashing whenever Kratos, Fat Princess, and three of the four current levels were used. However, the demo was still playable with four different characters and was a lot of fun. I was able to get four games in, one for each of the playable characters (Parappa, Radec, Sly, and Sweet Tooth).

The control scheme is very simple having three assigned attack buttons and a jump button. Each attack however is a different special depending on the tilt. Think Super Smash Bros’ B special attacks. Except each character has 24 of them. One thing I noticed is the pacing of the game, as the attacks can’t really combo with each other, they all have ridiculous recovery animations, even light attacks I noticed. So combos really only exists as multiple characters ganging up on one.

In the demo the only game type was where you had to use supers to KO other players. You don’t have a health bar, just a super bar and you can build up to three supers. Each super depending on its level has different range. A level one will be a direct strike, a level 2 will cover roughly half the screen, but can still be avoided, where a level three will take the screen and kill everyone. All supers are instant knock outs as well.

Playstation All-Stars seems to try really hard to not be like Super Smash Bros while still remaining a direct competitor and it feels like it’s doing a great job. By removing the focus on combos it creates a very different type of fighting game, one practically all fighting game enthusiasts will hate the competitive scene for, and that’s focusing on single well timed hits and supers.

It was really hard to squeeze information out of the representative demoing the game. All I was able to find out was that there will be a lot of upcoming information at practically every major event this year, and that the current game type won’t be permanent but just to show off a playable version at this time. 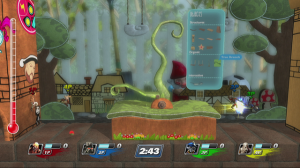 The second part of this article will be coming up soon where I will discuss my experience with Atlus’ Game of Thrones, Starhawk and more.