38 Studios new IP Kingdoms of Amalur: Reckoning has sold over 410  000 copies since its release in the United States. According to Rhode Island news station WPRI by the NDP Group, a majority of these sales numbers came from the first month of release, with 80 000 being sold last month. These sales numbers do not reflect digital sales or sales outside of the United States.

NDP spokesperson David Riley made the comment, “an impressive figure for just two months, no matter how you slice it”. This proves that a new IP is able to get its foot firmly in the door in this generation of established names in the industry.

Of course, with such big names across various industries being involved in the game’s creation it would be a shame if it didn’t do well. With Todd MacFarlane (Spawn) on artwork, R.A Salvatore (Legend of Drizzt series) creating the game’s universe and lore, and famed composer Grant Kirkhope (Banjo-Kazooie, Perfect Dark) as lead composer. This is essentially a fantasy RPG dream team come together.

38 Studios is still hard at work developing Copernicus, an MMO based in the same world as Kingdoms of Amalur: Reckoning. There has been no release date issued at this time. The studio is using a $75 million loan from the state of Rhode Island for the game’s funding. 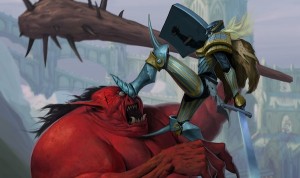