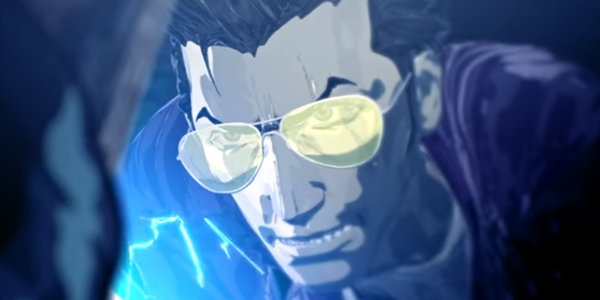 Otaku stereotype and laser sword enthusiast, Travis Touchdown, returns to a Nintendo console with the reveal of No More Heroes: Travis Strikes Again for the Nintendo Switch due out in 2018.

In the self-aware and stylish in-engine trailer – Travis gives the viewer a basic rundown of his world. As the worlds top assassin Travis loves a few things in life: namely gaming, killing, and anime. When antagonist The Bat comes to collect on al old debt Travis is sucked into “the phantom game console” towards the climax of the brief video.

All of this is an allusion to an upcoming cross promotion with various indie developers and developer Grasshopper Manufacturer to produce six unique crossover games that will see Travis Touchdown take on the bosses from these indie developer’s key franchises. It is no wonder that none other than Hotline Miami is briefly seen on Travis’ television screen during the reveal trailer.

No More Heroes skipped the 7th generation of consoles entirely (Xbox 360, PS3, Wii U) – with the last installment coming in the form of No More Heroes: Desperate Struggle in 2010. The original No More Heroes was released all the way back in 2008 – meaning that the release of Travis Strikes Again will mark the franchises 10th anniversary.

No More Heroes: Travis Strikes Again comes from the mind of talented director and developer Suda 51.