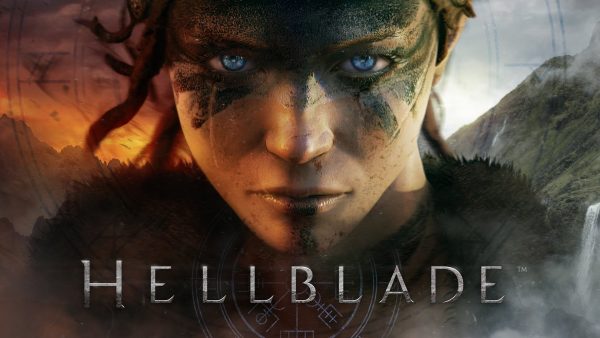 Hellblade: Senua’s Sacrifice has made quite the splash in the gaming scene as of recently. It is the indie game with the AAA quality looking to make a point to publishers, that it can be done without the AAA publishers sticking their fingers in the pie. Ninja Theory has labeled this game as the “independent AAA” game because of its focus on their strengths of strong character story, combat, and unique art style. They wanted to take these three key elements are far as they would go without anyone holding them back, but with that large ambition comes huge risk. Did this game pay off? Did it prove its point? A look at Ninja Theory’s claimed three key elements of story, combat and art will help make a conclusion. Is Hellblade: Senua’s Sacrifice more than just it’s slightly silly name? Or is there something deeper.

When we look at Ninja Theory’s first claimed key strength of character’s stories, there is a huge advantage that Senua has over many large budget AAA titles. It can take the story in directions that would scare off a lot of big publishers. In order to portray the main character’s psychological illness and psychosis with a degree of accuracy, neuroscientists were consulted along with non profit organizations who specialized in mental illness. Senua’s Sacrifice uses this aspect of Senua’s character to not only give subtle hints and guidance to the character through whispers informing you of incoming enemies and someone being behind you so you can evade or block them, but it allows for some interesting and even eerie imagery and visual storytelling. Senua’s visual hallucinations also allow the player to explore this character more deeply because we see how she reacts to different, sometimes extreme situations even though she wasn’t there, like when you meet a character named Druth and experience his horrifying story from when he was a captured slave through Senua’s psychosis and a bit of the supernatural. She also interacts with her auditory hallucinations occasionally or they sometimes try and speak for her intentions or her feelings. This could be assumptions that we have to decide are truth or mockery, but it adds to Senua’s character by showing the player her vulnerability and insecurities about her journey at least. Deep down, she has these thoughts and fears in her mind, adding greatly to her fairly silent character. Overall, Ninja theory has great characters and uses Senua creatively to tell an interesting and haunting tale that had me shaken down to my core at times. 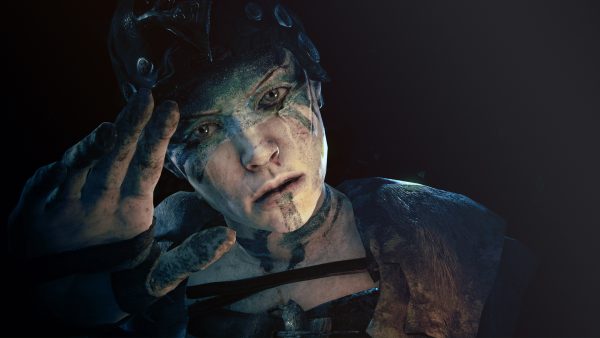 The combat in my opinion is the weakest element, but still effective. Using the voices in Senua’s head to guide her during combat was a creative choice by Ninja Theory. The enemies are intimidating and while there are only but a few at a time, that works in the game’s favor as it makes the fight seem more intimate, intense and have more weight. There is no horde to slice through like a hot knife through cheese, but just you and your literal demons and a few strong monsters at a time. They won’t go down with a simply slice, you need to be fast and reactive and know when is best to hit and when is best to dodge. You also don’t want to forget your ability to slow down time and get some well placed hits in that hard to kill enemy which is especially effective for a more casual or less talented player. This is good, considering you are warned at the beginning of the game that if you die too often, your story is done and you need to start over with your save file deleted. Play on easy mode if you are the more cautious sort. 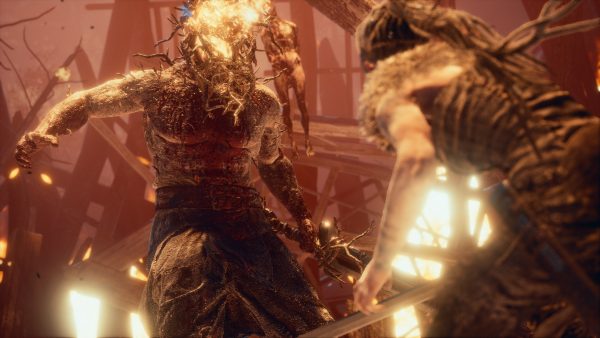 The art in Hellblade is the third element Ninja Theory mentioned and is very striking to say the least. There are often bright colors against dark colors to make the, at times, frightening images stand out so you take notice and allow it to stick in your head. The puzzles that have you searching for a matching symbol in the scenery are a great excuse to take your surroundings in and appreciate the well detailed textures and eerie environments. Senua herself is a beautiful character design with her face paint, large emotional eyes and strong looking body., It’s also haunting if you begin to fail your combat and see the black rot take over her body slowly. 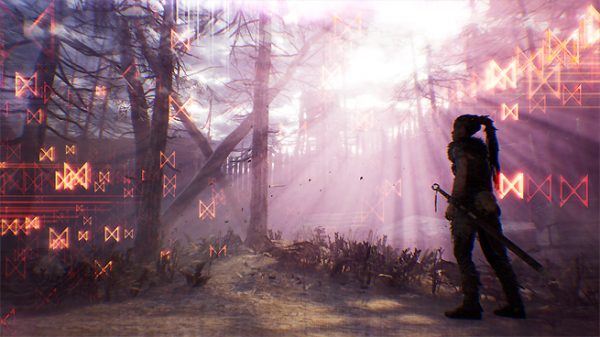 Overall this game is a wonderful story of love and devotion and strength told in the most disturbing and eerie way possible. With its striking art and imagery, intimate and intense combat and haunting story telling, this is a homerun for Ninja Theory and its team. It is easy to tell they had a goal and were determined to reach it and they succeeded. Hopefully, more indie developers show that AAA publishers are not always needed to put out AAA quality products.