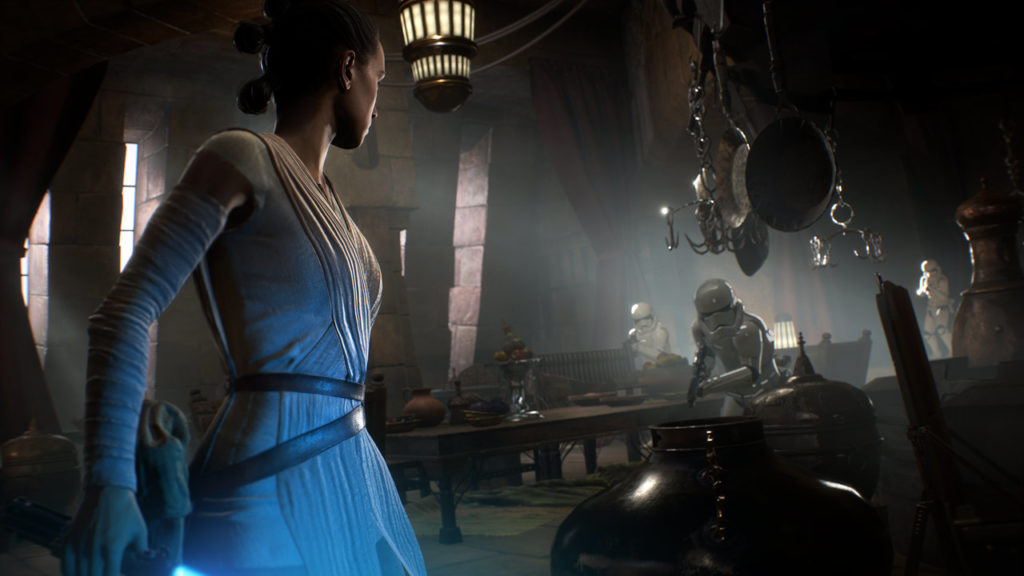 EA dedicated a very lengthy section of their four hour livestream this afternoon to DICE’s sequel to 2015’s Star Wars Battlefront reboot. This included an on-stage presentation and featurette about the group of skilled players who helped provide input to developers about the type of changes needed to make Battlefront II’s multiplayer a success. We also got our first look at an actual full multiplayer battle thanks to their Battle on Theed promotion.

DICE has made a number of fundamental changes to how the gameplay systems work in Star Wars Battlefront II. The most obvious is that units, heroes, maps and technology from all three eras (A New Hope Era, Prequels Era, The Force Awakens Era) are all present within a single match. Want to have Rey fight alongside Han Solo? You can do that! Want the Emperor to electrocute Jar Jar Binks, GO FOR IT (okay.. even in my wildest fan dreams we don’t know if there is an actual playable Jar Jar.) Power-ups and ship combat have changed as well – instead of picking up a token on the battlefield to spawn a special weapon, vehicle or hero, players are provided “battlepoints” for almost every action they perform . Whether you’re shooting an enemy player, blowing up a ship with a tracked missile or capturing an objective you’ll earn battlepoints for all of them – at one point during the livestream we saw a ship simply spawn and then crash into a building, and that player still earned BP. The amount of MP to spawn with a different class, weapon, hero or vehicles differs – so we don’t have a clear sense as to how much each of the specific types of purchases cost.

During the livestreamed Assault on Theed multiplayer match, which takes place on the planet of Naboo the Separatists (which include clone troopers from Episode II, the Rebels from A New Hope era and The Resistance from The Force Awakens era) must defend the palace from a large mobile bomb being escorted by the forces of the Galatic Republic (Empire from A New Hope Era, The New Order from Force Awakens Era). Matches on Theed are divided into three distinct phases: a large open urban area where aerial dog fights happen alongside multi-unit battles in the streets of Theed. If the Galactic Republics continues their push the courtyard near the palace gate will unlock, funnels ground units into a narrower space. The final phase of Assault on Theed takes place in the Queen’s throne room and is designed for full on close-quarters combat. It is quite interesting to see Battlefront II adopt three distinctly different gameplay flows and map styles within a single match, very similar to what DICE tried to achieve with the Death Star DLC for the original Battlefront.

Other interesting tidbits included the inclusion of Episode I’s Battle Droids and Darth Maul as selectable units after accumulating enough battlepoints. It was also confirmed during the match that both Han Solo and Boba Fett will return from the first title as Hero Units alongside newcomer Rey. With EA promising 3 times as much content as the original title and free Hero, Mode and Map updates for all players without a season’s pass Battlefront II should have Star Wars fans excited. Star Wars Battlefront II will be out on November 17th 2017 on Xbox One, PS4, PS4 Pro, PC and Xbox Scorpio.