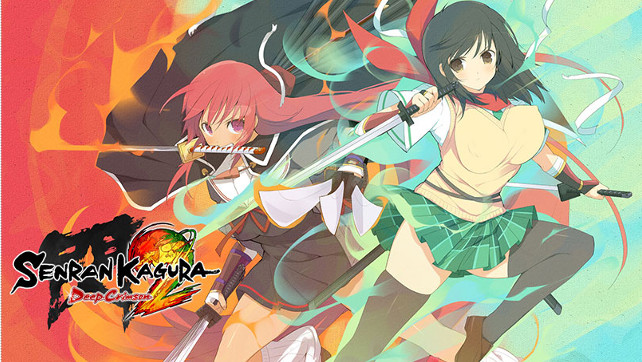 Parallel to the look of the girls in the game is the fact that the game has a look and feel of anime. I’ve long enjoyed anime and the culture of Japan itself. I’m a regular watcher of anime on Crunchyroll and am an annual attendee at various anime conventions. Playing Senran Kagura 2: Deep Crimson feels like I’m playing an anime, albeit more on the ecchi side of things.

So what is this game anyway? Here’s the plot of the game:

In the shadows of a moonlit castle, the buxom young shinobi of Hanzō National Academy face their rival shinobi students from Hebijo Clandestine Girls’ Academy. But their covert battle of good and evil is only a pretext for a darker plot, as the Hebijo girls’ diabolical puppetmaster seeks to harness their bloodshed for power beyond imagination. Now, as his plague of summoned demons spreads across Japan, the rival girls find themselves on the same side. Thrown together into unlikely pairs, the bubbly heroines and wily renegades face an army of hideous foes.

Meanwhile, two mysterious newcomers look on from the sidelines. One is a young girl, who brightens up the room with her cheerful innocence, and who happens to have a sweet tooth…for the hearts of demons. The other is her devoted guardian, a warrior monk who will stop at nothing to see the child fulfill her terrible destiny. So begins an all-out war with the underworld itself. If the girls can put aside their differences for long enough to make a stand, Japan just might survive…but their clothes probably won’t.

Senran Kagura 2: Deep Crimson, the sequel to eShop exclusive Senran Kagura Burst, is very much a 2.5D brawling title at its core. In many of the levels you are progressing from start to finish while beating up baddies along the way, to the eventual “end boss” fight to end the level. Though there are some levels which are strictly fights on their own. The battles, especially the boss fights, feel somewhat like traditional fighting games, with the ability to roam around freely without being limited to a side scrolling style. There are also some levels where you will fight co-op with a computer controlled partner, with whom you can swap with.

During the battles, each hit the girls take reduces both their health gauge and their costume’s durability. As you continue to take damage their outfits slowly tear off bit by bit until all durability is lost and they’re left in nothing but their swimsuits. This also ends up resulting in taking more damage. As you lose this durability the game will “zoom in” to highlight that your outfit is tearing off.

This can be changed in the options though so if you aren’t a fan of the game taking a quick pause to show this off.

As you play the game you’ll unlock new move-sets. Each girl also has a Ninja Art gauge which, when filled, lets that girl perform a “Shinobi Transformation.” This unlocks each girl’s true shinobi form and allows for powerful special attacks called “Secret Ninja Arts.” These special attacks deal massive damage and have a wider range than a normal attack.

The different moves come with varied controls, which are a challenge to master. Luckily there is a training mode which can be utilized to perfect them.

The overall story to the game is bridged through an engaging visual novel style. You can watch the girls interact and challenge each other in these scripted cinematic scenes that introduce each stage. Visual novels are something I have started to get more into and appreciate more as of late, and the 3D character models are great to see with these story sequences. Also the game includes full Japanese voice-overs with English subtitles for all of these scenes, which helps the feel of watching and playing an anime. 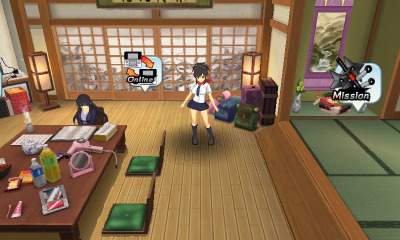 In between levels you will reside at the academy, which is sort of a hub of all operations. This is like a 3D menu where you can change character, change you setting, access the next mission and training missions, view unlocked images/movies/music, and use the dressing room.

The dressing room is a total fan service vehicle, but does have some useful features for the game.

Each character’s costume has three parts: Uniform, Swimsuit, and Shinobi Outfit. You can customize what each character wears during the battles, including what they transform into. These outfits are also there in the in game cut-scenes as well. You can customize their outfits, as well as hair style and hair colour. It’s a nice touch.

You can also pose the girls in various poses, dynamically move around the camera, change the background image (including using the Nintendo 3DS AR card to put the character virtually anywhere in the real world) and save photos to your SD card. This is something that I don’t do in most games, but with the games lack of Miiverse support for taking screenshots it was really appreciated.

Senran Kagura 2: Deep Crimson also has an amazing soundtrack. In fact the collector’s edition version of the game actually comes with a physical two disc soundtrack. The music is high energy and a great accompaniment to the beautiful visuals of the game itself. The game makes great use of the 3D in the Nintendo 3DS, with the in game cut-scenes looking breathtaking!

Overall I had a blast playing Senran Kagura 2: Deep Crimson. In fact while I do get review copies of some games, this one was a personal purchase. A purchase that I don’t regret one bit.