The new platformer / smash’em’up “Slain!” is the first release of its developer Wolf Brew Games. “Slain!” was KickStarted exactly a year before its release to a figure just shy of $20,000. It is currently out on Windows, Linux and Mac via Steam, with releases planned for WiiU, Xbox One, PS4 & Vita in June. The game is a retro style platformer with some light puzzle elements and very much in the style of many older “hardcore gamer” games. It has more in common with Castlevania or Ghouls & Goblins than it does with Super Mario World. This means it doesn’t really feel, play or look as you’d expect if your experience of “retro” really means “Nintendo 16-bit era”. The graphics aren’t shiny happy and you’ll kill everything you run into with a bloody glee. This is not a bad thing. In fact, I think it’s fantastic to seen something along those lines. Beyond just the graphical difference of goomba stomping and swords, those games had serious differences in their play and controls. 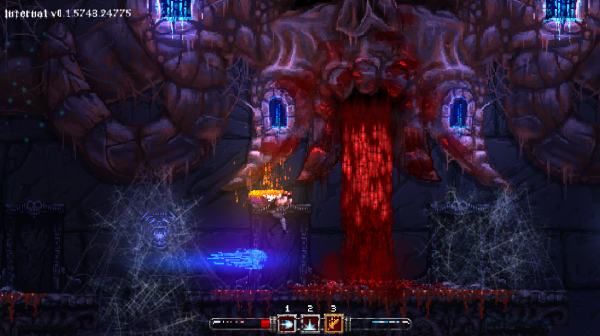 To start with the best points, the game’s art is phenomenal. The pixel art is detailed and fresh, showing that plenty of time was taken on it. Further, levels have several layers of parallax and on screen effects. Sadly, despite trying every graphical quality setting I couldn’t get the on-screen mess, splatters and glow to tone down, making it hard to play through at times. That “mess” is mostly 3D layers, effects, blood, parallel overlays. It’s not a bad choice and fits in solidly with the graphics being almost exactly what I’d expect of a well-designed PS1/Saturn-era game, but it is impossible to tone down and can make it hard to see what I need to see in order to avoid instant death. The underlying pixel art, and some touches, such as seeing the floating medusa heads before reaching the “Hive” is fantastic and reminiscent of top notch games in that art style. A lot of the pixel art in the parallax layers is great as well.

The music is well done, there are great and varied metal tracks throughout. I do wish there were more pauses though, the music is always on full blast regardless of your character pausing, fighting, or beating up a mini-boss. The sound effects do mix in well. Largely, I suspect the developers simply didn’t have time to add in more variety to the backing tracks. The music lends a serious element to the game and works well for slicing and dicing your enemies.

Unfortunately, the dialogue works against that. The writing is extremely basic, peppered with the use of instant messaging shortcuts such as “tho” and “btw”. Unfortunately, this wrecks the “mood” of the game. Further, much of the dialogue in the game is fairly light hearted. Not only does most of it just not hit my funny bone, it also cuts against the serious feel of the game’s graphics and music. This takes you out of the immersion. This is the start of the many problems with the game.

For one, there’s no cloud save. Your saves are stuck to a single system, no good in case you often switch between OS installs or machines. In fact, the save system simply isn’t all that well thought out. The game auto-saves at each major level, but not at each checkpoint. There is no easy way to manually save or check where your last save is, so be prepared to play through some small or not so small sections all over again without expecting it. If there is a save icon or screen, I missed it. A full-on save screen would be appreciated, even if it can save almost instantly. The checkpoints are extremely frequent and do allow for any meaningful progress to be maintained while you’re playing, and there is no life limit since you’ll die almost as often as Super Meat Boy. These checkpoints help keep the game from being frustrating for the wrong reasons, but with the shaky save system it’s just not enough.

Of the bosses, some of them are extremely repetitive, especially in the first level where you can simply bash through all of the mini-bosses if you time the first swing right. There are occasional AI glitches, for example the Thorn Beast boss simply stopped moving, letting me kill it easily. Further in, the fire hounds stopped moving too, although they at least kept shooting at me. Some moving platform puzzles didn’t sync up right, meaning they could be easy to get across or extremely hard depending on your timing. One “skeletress” simply didn’t attack me while I hit it from another, moving platform. Basic enemies, for example skeletons and the rat-claws can simply be bashed through and most of them have extremely simple movement, never jumping, maintain a constant speed and floating enemies bouncing off walls at predictable angles. Outside of certain bosses, the initial difficulty isn’t quite enough for a game of this nature. Most of the bosses had very basic attack patterns, opting to simply swing away at your character instead of being animated into doing something more interesting.

The simple bosses are good considering the awkward controls. While only three of the Xbox buttons and two shoulder buttons are in use, but instead of weapons switching with R2 and L2, the directional pad is sacrificed for weapon switching. For a retro platform this is a disappointment, and the pre-game configuration didn’t seem to be able to fix it. I couldn’t get the game to play at all with my Steam controller [Update: managed to get this working, but using the bottom most buttons and top most shoulder pads together is no fun], and the controls are mostly not configurable. Since this game supports SteamOS, I found that very concerning. I found the keyboard control layout to be okay after learning it, but different from most games’ usage of the bottom row for no obvious reason. In the end I stayed with my trusty Xbox 360 gamepad.

Attacks are fairly simple, there are three weapons, each has two swings. You get all of them after the first level and two during the first level. These weapons affect monster types differently, which is nice. The main swing always has a button-mash combo, the other decapitates basic enemies for Mana on their final hit point. You do get two “spells” that use up mana, and in return give you a ranged fireball and a screen-wide explosion. In theory, combined with the enemies that require well timed attacks and restraint on the combos, this is a great system. In practice, I found most enemies could be smashed through and the timing to be frustrating. That said, I think the control problems are something that mostly require tweaking. Further into the game enemies became more difficult on average and it’s okay to only need somewhat careful timing & memorization on mini-bosses. Assuming they patch in more configuration of the controls, this part would be acceptable. The movement back and forth or while jumping is okay, jumps are not in the “fluid” Mario style, but the choppier older platformer style that allows for pixel perfect precision. As there are plenty of lava-floor scenarios in this game, it was a good decision and works well, even if it doesn’t look fluid.

The floor is lava.

The game’s configuration menus are extremely awkward. Audio can be configured within the game, but is the only thing that can be. All of the graphics, resolution & controls that can be changed are configured pre-game. This pre-game configuration pops up every time, the game never launched directly into play for me. Further, after that screen, my mouse cursor refused to hide on either Linux or Windows, leaving a cursor on top of the game at all times. I’m not sure if this is something the developer can fix, or an underlying problem with the platform they chose to write the game on. The developer seems aware of many of these problems. They released a note on the Steam page promising the following:

“As of this week we will be using an updated SFX professional. We don’t have a timeline on the SFX re-haul but it will start this week. As soon as we know the date it will be delivered we will let you know!

The first patch is going to take care of: bugs, in game text, control pad, transition screens in game and we will also be looking at Keyboard lag and menu bugs, again this is in the works but don’t have an exact date. We will let you know as soon as we do.

We are of course looking at the combat system and some other additional issues, but do not have specifics or timelines as final decisions have not been made.”

This is good, as it shows the developer cares and is aware of at least some of the issues I pointed out. Still, if they were aware of these issues, they probably should have held off on the release itself. I am hoping that some soon to come patches will put this game into a recommendable spot, but I cannot recommend it fully at this time. “Slain!” Is not a long game, not inherently bad for an affordable indie title. That said, combined with the frequent checkpoints, I could see someone decently good at these types of platformers & okay with slogging through its rougher spots beating it in a day.

Overall, especially with something of a glut of games available today, I can’t recommend this game. It is genuinely gorgeous, and has good music, but the gameplay at its heart fails to pull together. 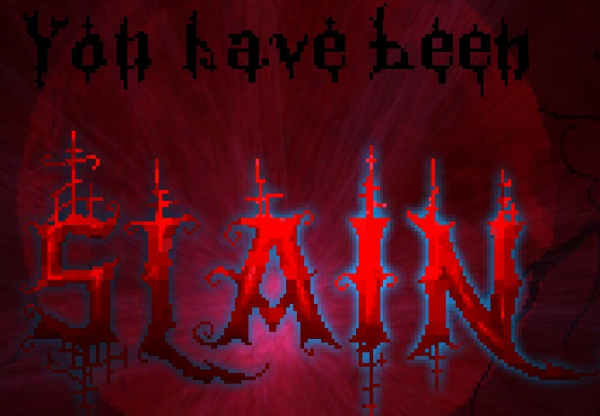 You’ll see this a lot