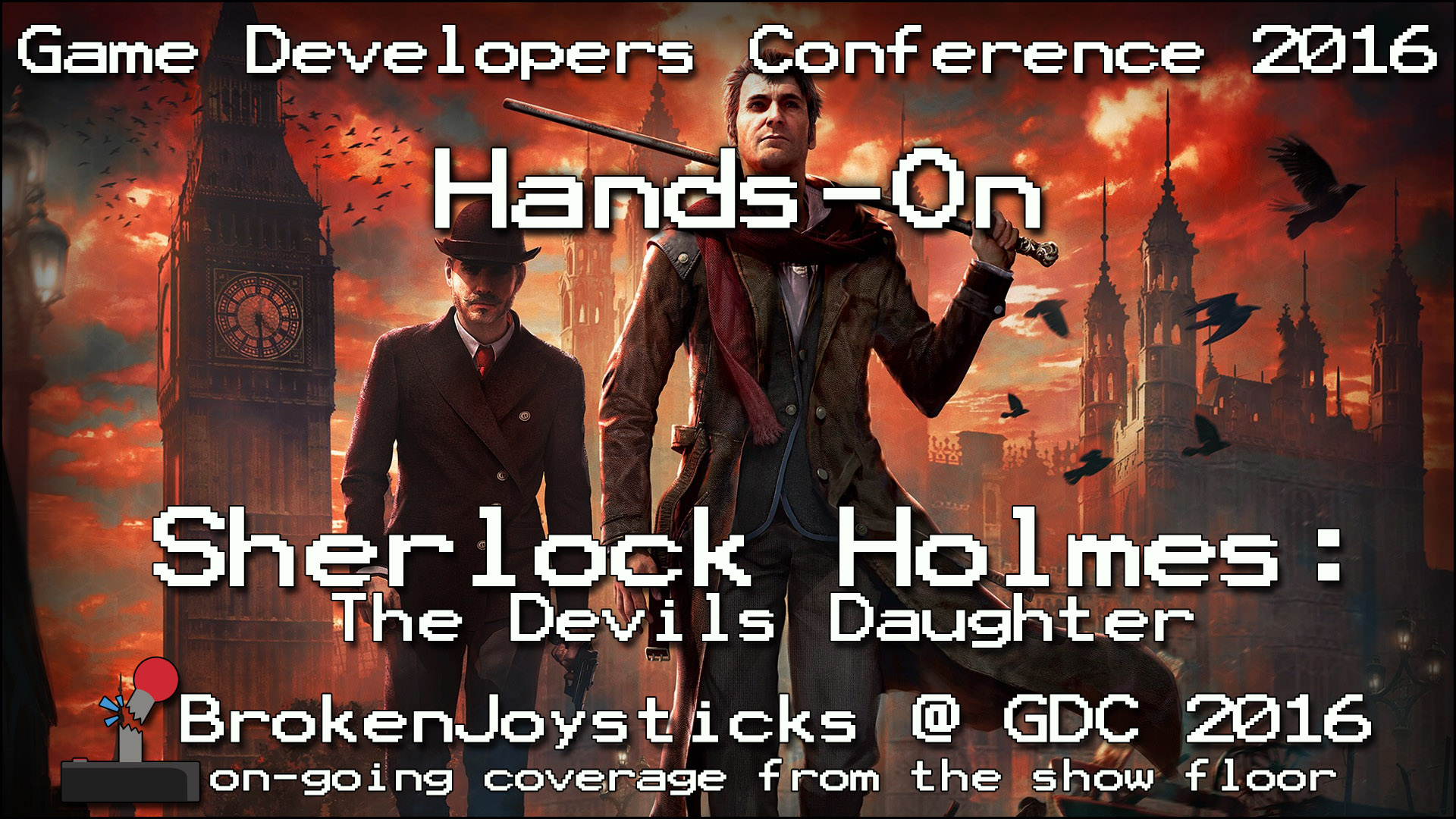 Sherlock Holmes: The Devils Daughter is an action-adventure game that transports players once again back to Victorian London on PlayStation 4, Xbox One and Windows PC. This latest iteration improves upon previous entries in the franchise by bringing features and gameplay elements from previous games like Sherlock Holmes: Crimes and Punishment. I got the chance to check out the title at a demo booth at this year’s Games Developer Conference, here are my impressions.

Like other games in the series Sherlock Holmes: The Devils Daughter is a third person investigation game where the world’s most famous fictional detective must solve 5 unique case. Like the older titles this game is powered by Unreal Engine 3, however the developers at Frogwares have made several improvements to the engine like physics based rendering in order to make the most of the technological horsepower afforded to them on the Xbox One and PlayStation 4. Each case will take players about 3 to 4 hours in order to the complete. 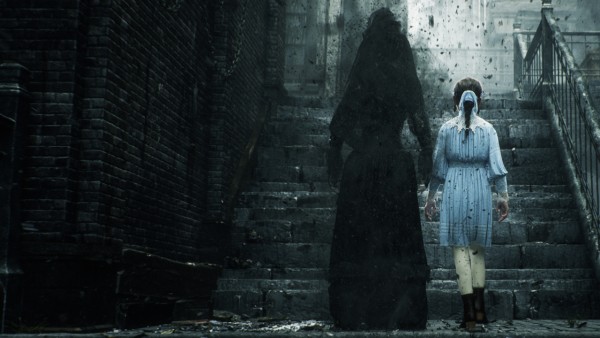 The version shown at GDC 2016 had several “time skips” inserted into it in the interest of time. It contained one single case, titled “Infamy”, and lasted around 30 minutes – allowing us to see only about 1/10th of the content from this case. Infamy opens with a young girl addressing Sherlock about another NPC called Misses Alice. I quickly learn that this young girl is Detective Holme’s adopted daughter from the last game, it is clear that characters and possibly events from past games will return in Sherlock Holmes: The Devils Daughter. The second nonplayable character I am introduced to during to during the beginning of Infamy is Mr. Wilde, an eccentric author who is adapting Sherlock’s work for the theater. With his outlandish stovepipe hat and colorful ensemble it is quite clear that Wilde has no problem being the center of attention.

During Wilde’s introduction, one of Sherlock Holmes’ key gameplay features is demonstrated – Holme’s deductive reasoning skills and keen sense of observation are demonstrated through a mini-game like element where the player is able to inspect various aspects of the NPCs to search for clues. During the demo Sherlock was able to deduce that Wilde was from America and that Wilde had been studying Sherlock’s mannerisms long before the pair were introduced. How did our detective come to this conclusion? Wilde happened to be wearing a small American Flag on his jacket lapel and had Sherlock’s favorite brand of cigar stashed in one of his pockets. Players will have to keep their eyes sharp if they want to find all of the available clues during investigation scenes. 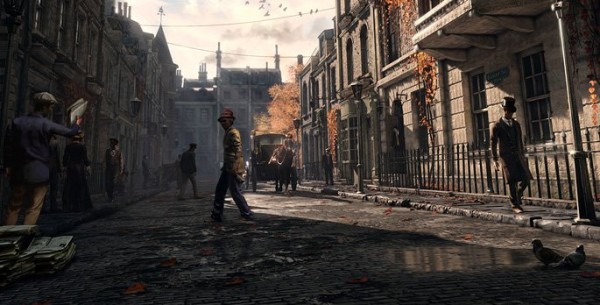 It was at this point that the demo skipped to about the midpoint of the case. Sherlock is confronted with a bomb while meeting with Mr.Wilde. Using a similar interface to the investigation mode from earlier, Holmes has to defuse the bomb by deducing the correct steps or both Wilde and himself will face oblivion. With the bomb defused Wilde tells Holmes that he believes the bomb was meant for Wilde and not Holmes but Sherlock assures Wilde that he was not the intended target.
The demo then skips forward ahead a shorter amount of time than last. Sherlock has found himself in the Green Dragon Tavern to investigate the young youth he believes planted the bomb. While in the tavern the game shifts perspective from the first person point of view used in both of the previously playable sections to a third-person POV whee Sherlock Holmes is able to freely walk around the tavern and continue his investigation. Unfortunately, it becomes immediately apparent that there is a smuggler blocking the door who will not relent his position. In order to proceed Sherlock joins an in-progress game of cards and discovers through the deduction mode that one of the players is cheating using a mirror to gain the upper hand. This discovery, in turn, causes a commotion which allows Sherlock to proceed in to the rest of the tavern. 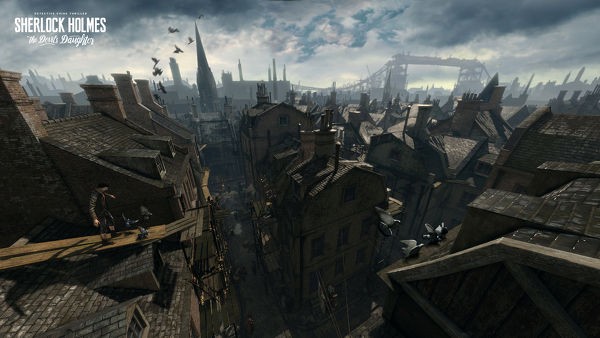 The adventure to find out that the would-be assassin who is after the life of Sherlock Holmes culminates in a visit to a small church in the city of London where the black haired youth from earlier, who we now known is named Jeremiah, resides. It is at this point another taste of some of the gameplay mechanics that make the Sherlock Holmes series of games so unique is displayed, Sherlock decides to use the guise of a priest in order to strike up a conversation with the nun who heads up the youth haven. She informs sherlock that she believes Jeremiah’s behavior is the work of demons that have invaded their home, she reports that he is often now flippant with his caregivers and often disappears without notice for long periods. Sherlock agrees to “exorcise” these demons through clever slight of hand and showmanship. Pulling out a large antique cross and speaks in Latin, the exorcism ends with a series of quick-time events as Sherlock causes small amounts of fire to burn forth, simulating the demise of the demons. The case closes with Sherlock deducing that Orson Wilde is actually guilty of the attempted murder and not Jeremiah thanks to the string of clues that had been assembled over the course of the demonstration. Players are able to come to three different conclusions in the Infamy case based upon the evidence that they had collected throughout their adventure.