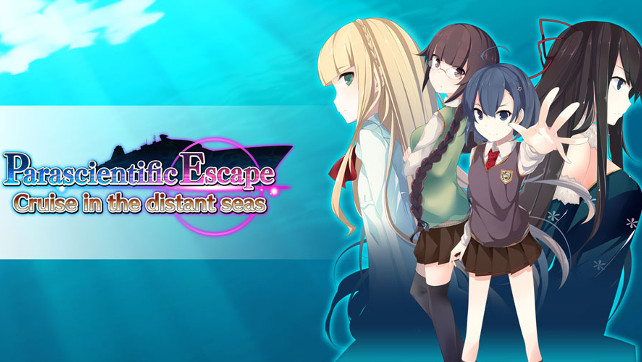 Parascientific Escape: Cruise in the Distant Seas is a visual novel with exploration and puzzle solving elements.

The game follows Hitomi Akeneno, a 16 year old high school student with a little secret – she has not one, but two psychic powers. After receiving an invitation, she boards a luxury cruise ship with her friend, Chisono Shio. As soon as she enters a suite room, a loud explosion sounds … and she finds herself stuck, unable to get out. Is this an accident? Or something far more sinister? The only way to find out is to escape, with the help of her powers.

This game reminds me a lot of the Ace Atorney games, with a lot of the conversation as well as textploration of environments. After very lengthy story sequences you will be given the chance to explore. This is done with the bottom touch screen, where you can tap on items on the screen. Doing this will usually pop up with a “look” option first. At this point the characters will talk about what the item is and you’ll get a bit more story, if what you clicked on is important. Items of no use are usually not clickable or will give you a short comment that nothing is out of the ordinary.

In the menus you have a hint feature, but it isn’t so much of a blatant clue as it is more conversation from the characters as they seem to try and brainstorm what to do with certain things you’ve found. It doesn’t tell you flat out “go here and do this” as it points you in the right direction or suggests something that might help you figure it out.

It is very helpful at times when you can’t figure out what you should be doing next. One of the biggest elements in the game are the clairvoyance and telekinesis abilities of the main protagonist of the title, Hitomi. In the world created in Parascientific Escape: Cruise in the Distant Seas there are certain people who have psychic abilities, of which Hitomi is one. She must use these abilities at certain points in the game in order to open certain locked things or obtain a crucial item to carry on. This adds a nice puzzle solving element to the game.

The first part is Clairvoyance. With this Hitomi can see inside of things, like a locked drawer or electrical panel. You have a set number of “clairvoyance points” which you can use to place circular openings on the screen so you can see what is inside. These need to be strategically placed for the next step – telekinesis.

At this point you’ll usually need to move an item to a goal point. Like something in a locked drawer to a hole so you can reach it. Or an SD card inside a locked panel into the reader. This uses up “telekinesis points” where each move you make uses up a single point. So every time you want to move the item or rotate an item via telekinesis it will use up one point. Run out of points and you’ll have to start over, though you can also start over either stage at any point.

For the most part this works pretty well, though there are times when one misstep can cost you an entire try. You’ll need some patience to get through these stages at times.

Exploring pays off in the game as well, with tapping on everything essential to getting through. Some of the later puzzles will require a lot of these points, and you can find “ether” around in the various items.

Artistically the game is very well done. The environments look good, the character designs are great and the music in the game is both catchy and entertaining. With a good portion of the game featuring dialogue only with stationary environments, this is a great thing. While the exploration and PSI features of the game use the touchscreen, the rest of the game can be mostly controlled with the buttons. From opening the menu, scrolling through options, advancing the story dialogue, and selecting items, these can all be done with the buttons. The only feature that is fully dependent on the touch screen is the exploration and PSI. It would have been nice to have been able to use the dpad or circle pad to move a curser at those points.

The other part is the story dialogue. Much of the game features the story and plot advancement, with it necessary to tap a button or the touch screen to advance the text. At times I wanted to put the 3DS down and just read along. A handy auto play feature for these segments would have been nice.

Part of the charm to this game is really in the story, which I can’t get into without spoiling everything. The plot all seems “too good to be true” at the start and seems too intentional. Like the events in the story were put in place to facilitate the gameplay mechanics. But as the story unfolds you realize that isn’t the case at all and those quirks hide a larger fiendish element.

This game really sets up for so much more.

Parascientific Escape: Cruise in the Distant Seas is an intriguing visual novel and the second to arrive courtesy of Circle Entertainment. It’s like reading a good book with it’s own soundtrack, and while there are some hiccups with the translation into English it doesn’t distract from the enjoyment.