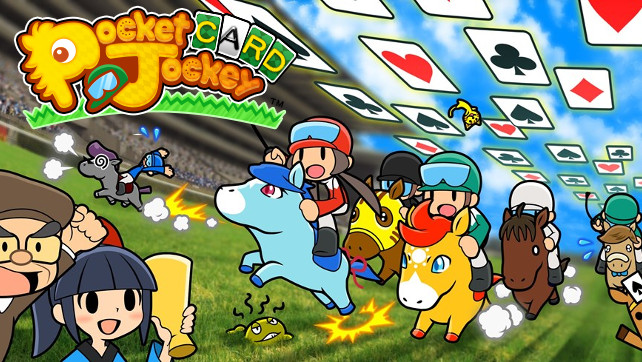 I’m a sucker for neat little niche games, and have always enjoyed card games. So when Nintendo tossed out the news that Pocket Card Jockey was coming to North America, I had a huge smile on my face.

The game has been developed by Game Freak, a name you should know if you’ve played any Pokémon game ever. They’re only the developers of those games. Since developing the first Pokémon game they’ve been behind every game in the main series since then, including upcoming Sun and Moon.

Pocket Card Jockey was released in Japan as a mobile game which has since been retired. It was released for the Nintendo 3DS in the Japanese eShop on July 31st, 2013! We’re just getting it now and I’m actually pretty excited.

Pocket Card Jockey, originally titled Solitiba (Soriti horse), is Solitaire meets horse racing. Game Freak’s new mashup puts players in the saddle as a jockey who must complete a fast-paced, simplified version of solitaire to propel the horse through intense races. It’s all about leveling up the horse through strategic positioning and placement on the track. Over time, players can win trophies for high-ranking races to secure sponsors.

The game launches in the Nintendo 3DS eShop in May. Check out a Japanese trailer for the game below, followed by some gameplay footage from NintenDaan.