after the story intro the player is asked to select from two options, endless and arcade, endless unfortunately was not available at the time of review. It will be added later. after starting the arcade mode, the player has the option of choosing three difficulty settings to play though Casual, Veteran, and Hell. For people that aren’t really familiar with shmups, the first choice, is a really good difficulty setting to start with, otherwise Veteran plays more like an arcade game from the mid/late 90s in terms of difficulty, and Hell is almost Touhou-level pain. When the difficulty is selected, there are two more options that pop up: Normal and Hardcore. Normal plays like the original game, while Hardcore removes health power-ups and checkpoints. With Hell difficulty and being able to play Hardcore mode being added into this version, it provides a very difficult, and possibly, rage-inducing challenge for people that have managed to play though the original on Veteran numerous times and might be looking for a new challenge. Following the difficulty selection is the ship selection screen, where there’s a whopping 14 choices. The selection screen shows the capabilities, stats, backstory, firing patterns, and character portraits for the pilots, the latter two features being new to this version and gives a lot more character to the game itself. 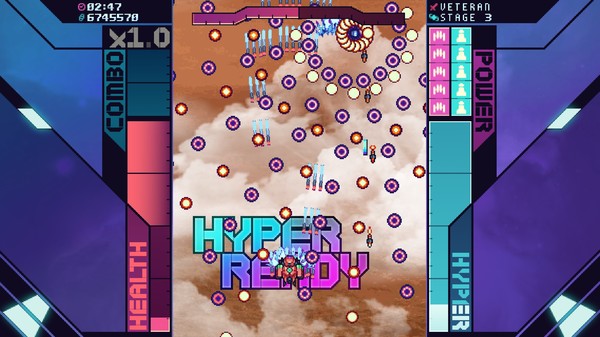 Another major difference from the original game is that instead of a text-based intro sequence to stages being played, EX gives the added distinction being voiced over. Not only does this add character, but more personality to the game itself and is a very welcome addition to it.

While fighting though the armada, power-ups will be dropped to fill up the Hyper gauge, power up primary or secondary weapons, or recover health to help the player get though the game. After filling the Hyper gauge, each ship can unleash a devastating attack which usually clears the screen, but vary how they execute depending on which pilot that was chosen, Vermilion fires off an all-encompassing beam wheel, Auburn a missile swarm. Each ship has it’s own play-style, so it can take a while to figure out what’s comfortable and what might be challenging when playing though the game’s six stages. Gameplay is very smooth, and even moreso when compared to the original game, where it felt like movement was a bit slower and jerkier. Super Galaxy Squadron and it’s EX variant support both keyboard and gamepad for controls, but sadly there are no options to change the controls. This isint very rage inducing considering you only need three buttons plus the control stick.

For people might be wondering as to why an EX version of this game was released, when the original Super Galaxy Squadron was made by Nick Clinkscales of Synset Games (formerly Psyche Studios), $10,000 in procedes from 2015’s game sales was donated to Child’s Play to help out sick kids, which is pretty damn awesome. This retooled remaster is published by New Blood Interactive, which has improved and added to Nick’s original work to amazing effect. As touched on earlier, Super Galaxy Squadron EX has had numerous additions and redesigns, which also include a very nice graphical overhaul making use of most of the screen space when compared to the the non EX version.

Another thing of note is that enemy patterns, attacks and designs have been revamped for this release, possibly throwing off players who expected the same exact game as before. Overall, the original game gives off a very nice 16-bit home-console or arcade look and feel from the mid-90s, while EX feels like almost a new game that could have come out during the late 90’s/early 00’s and been a feature release for a system like the Dreamcast. As a bonus, people who purchased the original game received EX for free, and people that bought EX also received the original game as well. It’s a very nice touch from the publisher.

With either game, it’s very easy for newbies to get into with the easier difficulties, or can be a rage-inducing challenge to get though on hell with hardcore for people that love trying to get though bullet hell. It’s one of those kinds of challenges that keep people playing to see if they can either top the high score, or just survive though it. A lack of a limited lives system is refreshing, especially when looking back to console ports of shmups of the 90s that gave limited lives and continues, thus easing some frustrations though more difficult areas. One of the other major things of note besides the current lack of Endless and the inability to change controls, is that it’s a semi-short single player game. It’s not a complaint, but more of an observation of design choices, as it can be easy to pick up, clear a stage, and take a break. Having fourteen ships to chose from gives decent replayability to the game, and this is one of those games where I could play on Hardcore Hell just to say I can get though it someday as I love playing challenging shmups.  Whether you’re a die-hard shmup gamer, or someone who’s looking into exploring this genre, Super Galaxy Squadron EX is a very good choice

Super Galaxy Squadron EX is currently out on Steam