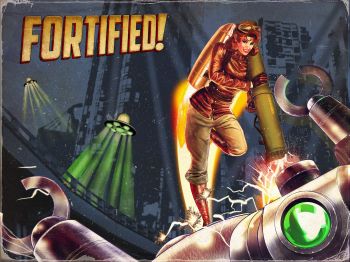 Fortified is a new third person shooter tower defense hybrid from developer Clapfoot. It’s a tale as old as sci-fi – Martians are invading! They want something from us, and only a small group of American 1950s stereotypes can help save us! The US government has recruited a rocket scientist, a secret agent, a space-man, and a captain to fight against hordes of aliens in an attempt to defend the Earth! Or at least, the rocket ship that will save the earth.  This will be a familiar formula to anyone who has played Orcs Must Die: you start on a level with limited paths for creeps (or in this case, aliens) to traverse, you place turrets and obstacles to prevent them from getting there, and supplement those turrets with your shooter skills.  At no point does this game do anything that we haven’t seen before in tower defense shooters. You get money for killing enemies with lets you build more defenses, which gets you more money, which after several waves of enemies leads to the end of the level. After each level, you are rewarded with upgrade points, which you can spend on better turrets, guns, and NPCs. One unique modifier that I have not seen before in tower defense is that as you increase the difficulty, the number of defenses you can use is lowered as well the time you have to place them.

The game features a wonderful 1950s take on technology – think Tommy guns and Tesla coils. I love the way it works in ’50s Americana with classic tower defense. Placing Tesla coils or star branded machine guns feels awesome.  Fortified has also added another layer of depth from other tower defense with NPC characters you can place and command.  There are several types of these characters, ranging from basic grunts to snipers, each of which has their own advantages and disadvantages.  You can also command these troops to do simple tasks like rush to your rocket to defend it, and return to their positions.

The rocketwoman character fights with two turrets at her side

Each of the game’s 4 playable characters get a great variety of weapons and turrets and NPCs to work with. Each character feels different. All have their own two weapons, slots for different turrets, and the ability to place NPC troops – this pairs with their primary and secondary weapons to form quite a depth of options. Each character gets a different set of turrets as well as NPCs so there is no feeling of cross over if you play with more than one character. Some of the characters excel at distance damage while others are best at hitting a large amount of enemies with area of effect damage. No two feel the same, but all can accomplish the goals in each level without terrible difficulty.

The weapons can at times feel lackluster, but each have a pair of unique upgrades and a secondary fire which changes its function. The Tommy gun, for example, has a secondary fire that shoots one high-powered projectile and the space man’s gun has a slow moving exploding projectile. Both of these feel different enough to make the secondary fire a whole new gun.  All of the guns lack the great feel of an FPS but that’s to be expected with a game whose primary mechanic is not shooting. One little thing that bugged me was that weapons auto-reload and if you are reloading and swap weapons it doesn’t stop the reload, so it’s possible to never run out of ammo. When your primary weapon runs out of ammo hit reload, hit E to change weapons, and use the secondary while the primary reloads.

Each character also has an “ultimate” ability which charges as they do damage and take damage. For the characters I played this ability resulted in me becoming immune to damage and my weapons doing a lot more damage.  It’s a nice way to allow players to feel powerful, or get out of a really bad situation when you end up in one, which you will. Enemies are heavily typified, each falling into a specific category, like flying, tank, or simple grunt. These enemies are clearly denoted at the beginning of the level so it’s pretty easy to plan what turrets and NPCs you need to place. I did lose a few levels with air enemies on them because I hadn’t spec’d into anti-air turrets, but this was easily corrected with the games built in re-spec system.  Fortified makes it as easy a click of a single button to reset all of your upgrades and put them elsewhere, which is really useful if you decide you want to try something but don’t have enough points to do so. 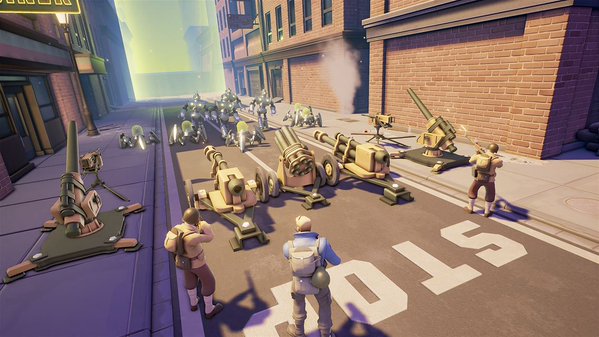 The game offers both solo and co-op modes. The co-op mode has room for up to 4 players, each playing as one of the classes, and the game allows you to play on any of its levels for co-op right out of the gate. The game offers 15 different maps across two different game modes.  I only have one gripe with co-op and that’s that money is split between players, often making it difficult to get the needed amounts for turrets and NPCs. Single player gets difficult fast – especially on harder difficulty levels. The limited amount of time and turrets you can place makes for a frantic game of run, shoot, place, run, shoot that often ended with a game over for me. Separate spawn points for alien mobs meant I would often concentrate my turrets on one lane, while expecting to have to hold the other lane with just me and a minimum of other defenses.  This is where the ability to control the NPCs came in handy: while I was getting overwhelmed, I could send the whole force back to the rocket to stand around it and hold off the wave.

The tougher difficulty in later levels left me with a great feeling of accomplishment after finishing each wave and a feeling of utter despair at what would come next. I really enjoyed playing the game, even if its campaign was a little bit short. This is easily made up for via the massive replay value of the co-op portion of the game. I can already see myself booting this game up for a bit of relaxing after work alien blasting in single or co-op modes. The amount of reliability and the simple but deep mechanics keep the game fresh and interesting long enough to have me coming back to play a good deal more.

So while Fortified is not doing anything new or ground-breaking, it does do tower defense very well. It has sufficient depth, character and level variety to keep it interesting so you can play through it more than once. The game gains immensely from having multiple players but it’s not necessary. The game is well polished, complete and a real bargain at $14.99.