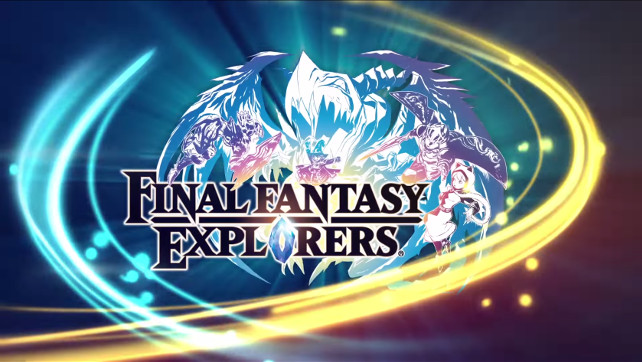 Any game is invariably going to be compared to its predecessors, or in lack thereof at least to other games in same genre. The same way that a sports title will never be judged purely on it’s own without comparison to previous iterations of the series, it’s hard not to compare Final Fantasy Explorers to other Final Fantasy titles. Or Monster Hunter.

I got a late start into the world of Monster Hunter, diving into Monster Hunter 3 Ultimate for the Nintendo 3DS a full three years after its release. Coming into Final Fantasy Explorers I had no idea how similar the two games were, and also how dissimilar they are.

Final Fantasy Explorers feels very much like a simplified version of what Monster Hunter is. Explorers is mostly a game where you go out into the world, defeating monsters, collecting items, and ultimately crafting better items and armor. And while Monster Hunter is extremely in depth, detailed and intricate, Explorers is much lighter and shallower of a gameplay experience.

That’s not to say that this game isn’t fun. Far from it. In fact Final Fantasy Explorers is refreshing with how much lighter it is. The world is on the brink of war over its reserves of crystals, the planet’s chief source of power. Players must band together to form an elite squad of Explorers on an island rich in crystals, braving hordes of monsters in hopes of conquering a newly discovered Grand Crystal – every Explorer’s dream. Either through solo play or with up to three other Explorers, players can dive into dungeons to collect crystals scattered throughout the world while battling classic Final Fantasy enemies.

Final Fantasy Explorers focuses on cooperative play with friends and utilizes a refined party system allowing Explorers to master over 20 new and familiar jobs — including Knight, Monk, Black Mage and White Mage — to defeat the realm’s mightiest monsters and even recruit them for battle. Players will have the ability to call upon the powers of eidolons like Ifrit and Bahamut, as well as transform into other legendary characters from the Final Fantasy series via the Trance feature.

Some of the focus on the game is on cooperative play. But unlike some games where this forces you to play online there isn’t that worry here. If you play the game solo, which I did for 90% of my time, you will have access to party members. Through the game you can capture the essense of some of the monsters, and then create monster allies in the monster ranch. You can then have up to three monsters travel the world with you and fighting by your side. These monsters, including everything from Bombs, Chocobo, and more, will also level up and get stronger as they fight.

And they are definitely a help when you take on some of the stronger quests and eidolons. The game also supports local and online multiplayer. It’s as simple as creating a room and having those on your friend list join up, or creating or searching for a room with anyone online. Having real people in the game with you can really help, moreso than computer controlled monsters. It’s especially satisfying that you can select “story” main quests while in multiplayer and have the help of others in completing them, which ultimately counts towards your own completion of the game. So if you set the quest, you get the story credit while everyone gets their share of gil, CP, and items.

There is one drawback from the online play though, and that is in the limited communication abilitity.

Voice chat isn’t supported in the game, which makes communicating between friends difficult. Especially in a realtime combat scenario. There are five pages of canned statements available on the touch screen, which unfortunately can’t be customized. Again comparing to Monster Hunter, that title supported both voice chat (on the Wii U) as well as customizable quick messages. I found much of the preset messages unhelpful in communicating with my friend. Text messaging via cellphone was far more effective, which is a shame.

Another element not supported in the game is 3D. Final Fantasy Explorers doesn’t have any 3D visuals in the game, which was a complete surprise. While the game doesn’t have the same level of detail and beauty as Monster Hunter, many of the environments in Explorers are beautiful and would have looked amazing in 3D. While there is likely some technical aspect of the game that prevented 3D, it is definitely disappointing to say the least.

That aside, one element that is far from disappointing is the randomized dungeon layouts.

While the main anchor field areas are static, the forests and caves that connect these fields are randomized. They typically contain two or three smaller areas to pass through, and each time you set out on a quest they have a different layout. It’s not a huge thing, but does keep the game somewhat fresh. Another fresh element is the job system. If you’ve played the Final Fantasy Tactics games you’re familiar with the job system. This game has that system in place as well, and as before you can switch between jobs and classes as you want once they become available. BUT one thing that I really appreciated was the fact that, aside from the weapons, all of the armor items can be used regardless of job. So if you spend time as a Monk and put time and effort into upgrading that armor, you won’t have to start from scratch with some fresh robes should you decide to become a Black Mage. You’ll be able to keep all of your armor and need only swap the knuckles for a rod.

Final Fantasy Explorers is built around quests, with main quests and side quests. The game is somewhat light on narrative, with just a bit of dialogue at after some of the main quests, which ultimately unlocks more quests and items.

You’ll have a limited number of weapons and armor that you can buy in the game, with much of the good stuff requiring that you forge them. This will require specific items, which you can find out in the world and dropped by monsters and eidolons. Some key items will also be available as a reward for completing some quests. Unfortunately a great number of the side quests really only give you some gil as a reward, and getting 2,000 gil as a reward after paying 1,000 to accept the quest isn’t really that much incentive. Luckily they’re typically pretty easy and the real reward of these quests is the items you’ll scavenge and the chance to push through the story and unlock more quests.

Also unlockable are Magicite, which literally lets you become a legendary Final Fantasy character for a short time. Charge up a meter by dealing out damage and you will be able to tap an icon to go into a trance and unlock the legendary character for a brief period. This also completely restores your HP and AP (action points) which can be a huge help when in a huge battle. In the end I think Final Fantasy Explorers is going to be one of those games that was made for people like me.

In every Final Fantasy game I tend to spend more time exploring than advancing the story, and I can spend countless hours roaming around and NOT getting on with the game. Sure there is a world to save and people are going to die, but … Chocobo racing!! And like Monster Hunter I’m going to spend even more hours trying to find the right items to forge the armour that I want.