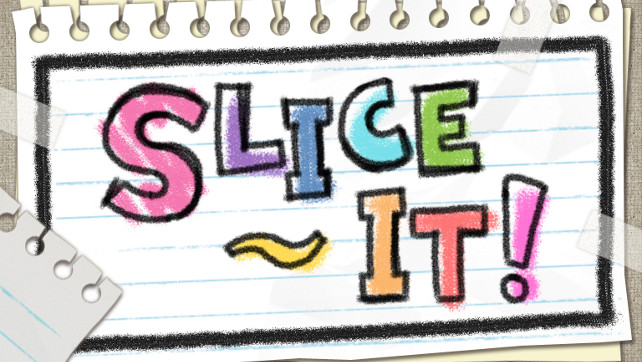 Slice It! is a rather simple puzzle game with a very simple concept. It is also the latest game to make the move from free app in the app store to a paid eShop title for the Nintendo 3DS. And while the game does have it’s fair share of challenge and enjoyment, the $5.99 price tag feels a bit hefty for what is available for free on smartphones.

But price aside, what is this game?

Slice It! is geometric puzzle game where your goal is to slice up shapes into the desired number of pieces in a set number of moves. You use the stylus to draw straight lines through a shape to make smaller shapes. It’s a very easy game to pick up but gets surprisingly difficult to master. The game was developed by Arc System Works and COM2US and published on the 3DS by Aksys Games.

In this game, much like the Brain Training games, you will hold the 3DS sideways. On the left (top) screen you’ll see the shape your working with, the number of “pencils” you have left in the stage, as well as the number of shapes you have and your goal total. The right (bottom) screen is where you’ll find your menu, undo button and the hint button.

For whatever reason there is no option to flip the 3DS and reverse these screen options. Sorry left-handed people. Once you begin a level you can start slicing. Utilizing the 3DS stylus, game mechanics are as simple as drawing your pencil across the virtual paper on the touch screen. And if you make an error or don’t like the placement of your line you can quickly tap undo to get a do over. Even if that last line you draw ends the stage in a failure, the game is very forgiving and lets you undo that last line.

You can’t just slice up the shape any way you want. The goal, and part of the challenge, is that all of the pieces have to be roughly the same size in volume. For example if you have to slice a shape into two pieces with one line, slicing through the centre will do the trick. However, occasionally if you make that line too far off to the side so that the two pieces are largely disproportionate, you will fail.

However this doesn’t always seem to be the case. Some of the later levels seem to be unforgiving with disproportionate pieces while others you can have one slice at 95% and the other at 5% and the game will fully accept the result.

Every line you draw has to completely pass through the shape. You can’t have one line end at another intersecting line within the shape. If the line doesn’t pass through the whole shape it won’t count. Interestingly enough when you start to draw your line if you want to adjust the start point you can use the circle pad while holding the stylus on the screen. This mimics pretty well the ability on smartphone screens of being able to use two fingers to manipulate your line since the 3DS touchscreen doesn’t support multitouch. In all there are 240 puzzles to work through. That doesn’t seem like that much but once you get going though that total won’t seem so few. After the first few dozen stages it becomes increasingly difficult. Simple circles or squares are one thing. Once you start throwing more abstract shapes into the mix it can be a real challenge.

The game is broken up into two episodes of 100 levels. Each of those episodes is split into five pages. You’ll need to complete the initial twenty to unlock the subsequent twenty levels, though this can be done in any order you wish. If a stage is a bit tricky it can be skipped and tried again later. As you might expect episode two is also fully locked until you complete the first episode, as are the 40 bonus stages.

The music in the came is pretty upbeat “elevator” music. If you’ve every played the Luigi Poker minigame on Super Mario 64 DS then you’ll know what I’m referring to.

Built into the game are hints, of which you’ll start with five. To earn more you’ll need to clear stages in “Slice it Quick” mode. In this mode you’ll get 30 seconds to complete as many levels as you can. In each of the rapid fire stages you’ll have to draw just one line to finish off the puzzle. Get it right and you’ll move on to the next. Fail the level and you’ll penalized -3 seconds. BUT if you draw the line just right you’ll get a perfect shout out and be rewarded with a bonus +3 seconds. The goal with this stage is to clear twenty stages. Doing so will give you another hint to use in the main game.

There are a few missions or achievements to reach, including clearing all the stages in episode 1 and two, plus collecting stars, medals and clearing 30 stages in quick mode. The game also has a few unlockable skins for the game, including a Nintendo 3DS exclusive Japanese styled theme. The original mobile game had a Christmas theme, so that is likely in here too.

For a casual pick up and play game Slice It! is a fun game. It’s simple yet challenging and just the sort of game that should be enjoyed on your 3DS. The $5.99 price tag is pretty high though, especially since you can get pretty much the same game in the app store for free.