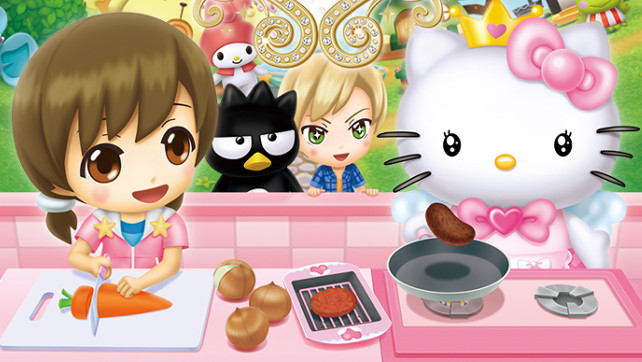 Hello Kitty’s Magic Apron ($19.99) – Get ready to cook up a storm, because Hello Kitty is back with an all-new rhythm action experience – one that’s really packed with flavour! Join Hello Kitty and her friends in the kitchen in this fun-packed cookery caper, jammed with mini games designed expressly with young players in mind. Learn the joys of cooking and the power of rhythm simultaneously, making new friends and coming up with tasty treats to the beat. Cute visuals, lots of unlockables and the option to create your own Hello Kitty-themed photos come together for hours of fun, all in the cute and lovable style that is Hello Kitty.

FINAL FANTASY EXPLORERS ($39.99) – Master more than 20 jobs, each offering unique ways to defeat or even recruit the realm’s mightiest monsters. Players will have the ability to call upon the powers of eidolons like Ifrit and Bahamut, as well as transform into legendary characters from the FINAL FANTASY series via the Trance ability.

RV-7 My Drone ($1.99) – Precise shooting with the touch screen. System that instantly teleports at drone. System capable of disabling an enemy. At some point, on the news or in documentaries, we’ve all seen the different applications that these devices have, from humanitarian to military. Would you like to be part of that trend? Do you want to conduct rescue missions, run supplies, put out fires, build bridges, defend power plants, protect food convoys? Or would you like to take action, challenging an entire army of air/ground drones? The RV-7 is one of the most powerful and technologically advanced military-grade drones. The government green-lighted this project for global security. Do you want to control it? It’s not easy to pilot, but it is very fun and exciting. You will have to solve all types of puzzles using the instant teleportation system.

FINAL FANTASY Tactics Advance ($7.99) – The fate of the kingdom Ivalice is in your hands. When Marche and his friends open an ancient magical tome, their small town is transformed into a fantasy-filled kingdom known as Ivalice. Guide Marche and his clan against countless foes, and discover the wonders of Ivalice. Build up your party, master abilities and summons, and learn tactical combat to win in battle.

Joe’s Diner ($7.99) – Keep things calm to not incur the angry chieftains’ wrath in this very special Arcade-Adventure Somewhere along the venerable Route 7, in the middle of nowhere, you will find Joe’s Diner. As an employee working the graveyard shift for the next month, your primary task is to keep the tables clean – no tough challenge at all. Unfortunately, there is a rub to it. The old Diner was built on the site of a former Indian cemetery. Amongst the buried, two rival chieftains lay to rest; while alive, each could not stand the other. One chieftain endeavors only to rest in peace. The other, a prankster both in life and the afterlife, is prone to ruffle the feathers of his fellow chief. Besides your tasks as a waiter, it is up to you to keep things calm and not incur the angry chieftains’ wrath. To lay them both to everlasting rest just do your duty. Sounds easy but it is not – promised.

Shadow Puppeteer ($14.99) – A strange, yet beautiful local co-op adventure. Invite a friend to explore the strange, yet beautiful world of darkness and light in Shadow Puppeteer, an award-winning, local co-op adventure. Assume the roles of a boy and his shadow, separated from one another by the evil shadow puppeteer. Work together to manipulate light, solving puzzles that bring you closer to finding this villain and freeing other shadows he has stolen.

Crazy Train ($1.99) – Crazy Train is an easy to learn and hard to master puzzle game that’s a highly addictive. Put on your thinking cap because hopeless train director Lionel Steeltrack needs your help sending passenger and cargo trains to their correct stations! Don’t get “sidetracked”… as you need to make sure your trains don’t crash.

Just when you think you got the hang of it, the pace increases as the speed of trains and their frequency in which they enter the game field becomes fast and furious. All of a sudden… It’s railroad madness! Jump into story mode where there are four unqiue track layouts to complete. Or take part in challenge mode where the difficulty and speed is ever increasing. With the proper concentration and practice you will become a master engineer!