Admittedly, I never played Turok during its original N64 release. Which is really quite surprising given that it possessed all the necessary traits to grab younger me’s interest. It was available on N64, it had rad ass cover art, and most intriguingly it had an M rating and likewise an 18+ tag stuck on the front by my local gaming store that I’m sure sent my young imagination ablaze pondering what salacious content could be included. Violence? Blood? Nudity? …please let there be nudity. (SPOILER: there isn’t any). Looking back at it now this game should have been right at the top of my MUST PLAY list. Nonetheless, I never got around to popping this cartridge into my N64 and when I took on the task of writing this review I knew little about the series (including the fact that Turok: Dinosaur Hunter had follow up titles and was in indeed part of a series). 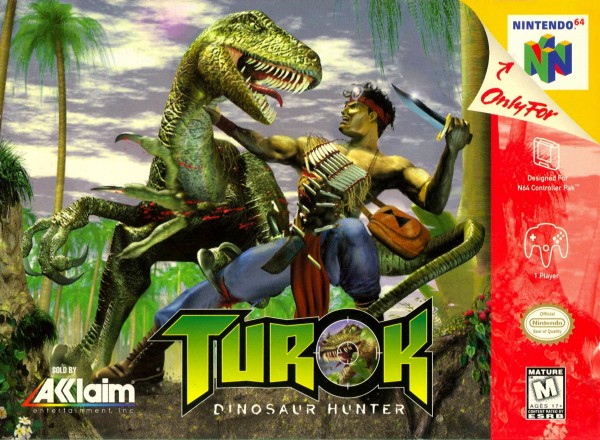 What I knew about Turok coming into this review.

I knew this was an FPS title originally released for the N64 in the mid-90’s presumably involving the hunting of dinosaurs. I knew that it had really cool cover art at a time in video game history when cover art still helped sell video games, and I knew that it may or may not have contained nudity.

What I learned after doing some quick research.

Turok: Dinosaur Hunter was the namesake of a comic book series on which the game was loosely based. The game released in 1997 was considered a large success for both Nintendo and Acclaim which inevitably led to follow up titles on multiple platforms. I refrained from reading any official reviews of the original game, but I did ask a few of my friends what their memories thought. The responses were generally positive ranging from “yeah, it was cool” to “dude, best 64 game EVER!” (Obviously this person had never played Smash Bros.) There was one notable complaint about a short draw distance that was masked by fog. While this unofficial reviewer wasn’t completely turned off by this flaw they did say that it made the game feel as though even if you did everything right you might still get burned by a baddy at no fault to you.

A big plus on any video game, particularly video games we play a lot, is the ability to skip opening logos and this Turok port does not disappoint. [Enter] will get you where you want to be in three easy presses. However, that said I do recommend watching the Iguana Entertainment snippet. It’s more entertaining than you’d imagine given the circumstances, and being that most of us purchased this game to be taken back to yesteryear I think we should take the time and immerse ourselves completely in the experience.

After you’ve enjoyed the production scenes you will be presented with the opening menu. I found the menu to be pleasantly nostalgic. Ditching my mouse momentarily I gleefully arrowed through each menu choice and for an instant imagined myself at 9 years old looking at a tube TV from a bean bag chair doing the same thing with my N64 controller. From there I scrolled into the settings menu where I was pleased to find a myriad of PC graphics settings. Including a draw distance setting (note my friend’s complaint from above). There was also the very 90’s post-tipper Gore censorship option to have blood be red, green, or invisible. The idea, I suppose, being that killing something with green or no blood makes it somehow less violent. Despite my interest in the psychological effects of these alternate blood settings I left it red and jumped back to the main menu ready to play.

After not even a full minute of playing I was impressed. This port was smooth. Like, really smooth. I was concerned that, like many old-FPS ports, this would be a studios back burner project for the less enthusiastic developers. Even if that was the case I sure as hell couldn’t tell. This game didn’t stutter once. Not even during one of my many I’m-out-of-ammo stabbing frenzies. The visuals are actually better than I expected for a game from 1997. Enemies are detailed and their animations seem smooth and realistic as they zigzag toward you avoiding fire. Even enemy spawn/death is well animated. One noticeable downfall is the random enemy generation. Random is fine with boundaries, but on several occasions an enemy would spawn directly in front of me as I was running through the level. It felt out of place and seemed as though I caught the game with its pants down. 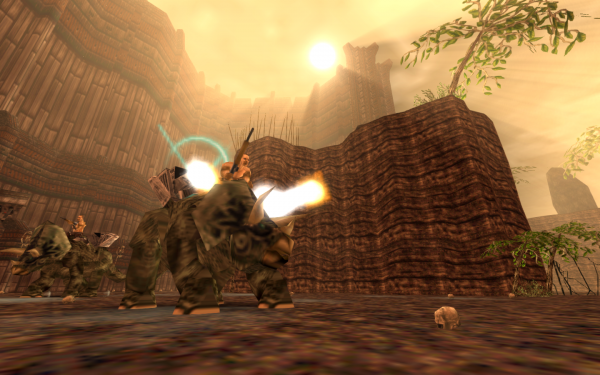 All FPSs from this era were compared to Doom and while I was reluctant to do so myself this game kind of begs the comparison. Much like Doom you find yourself in a maze environment littered with alien monsters (or in Turok alien monsters with the addition of people and dinosaurs) that want to kill you for an arbitrary reason that almost matters. Your goal is to survive and progress. To achieve this goal you are given weapons to kill monsters. These weapons have varying levels of effectiveness at doing said task. With each new weapon is the introductory “honeymoon” phase where you learn the weapons abilities while absolutely destroying everything before the monsters become tougher and more frequent. In Doom your character has a bob to his walk as you navigate through the courses. In Turok you get a bit of bob and some head spin when you round corners. There’s nothing overly unique about either Turok’s movement or weapon set (aside from the bad ass bow). Where Turok begins to deviate from this standard is in the introduction of obstacles.

To progress through the levels you will be confronted with a lot climbing, jumping, and (inevitably) falling. Falls are painfully unforgiving. At best when you fall you’ll be taken to the beginning of your jump sequence at worst you’ll end up navigating all the way back through a level. This feature is both aggravating and rewarding. I’m glad they included this play style because it adds a nice break from the constant killing of enemies which die pretty gruesomely for an N64 title. Where Turok absolutely excels though is in level structure.

You start off fighting monsters and collecting goodies, because that’s what you do in video games, but as you progress you begin to realize that some items are more important than others, namely keys. At some point during game play you find yourself in a circular area surrounded by active and inactive portals to other levels. To activate these portals you need a set amount of keys from previous levels to open them (notice that I said previous ‘levels’ not ‘level’). The keys are scattered throughout the game in non-sequential order. Because of that the player gets a greater feeling of open world-ness than is typical with this era of FPS. This feature while very cool does lead to a lot of frustration as you try to figure out where the hell you’ve been and how to get back there. Luckily, a very Doom-esque map feature is included. The overlain map is helpful, but not as helpful as you would sometimes like it to be. The colored lines don’t always display pathways so if you’re expecting clues to hidden items you’ll be disappointed. I found that the map is better used to identify your location than assist in exploring new territory or searching for alternate paths.

This Turok port isn’t going to blow any one’s mind. It’s a good game that was ported very well. Fans of the original game will probably agree, and, if I had to guess, I would say they are going to make up the biggest portion of buyers. A close second going to gamers like myself who remember the title, but never got a chance to play it. I can’t imagine anyone that hasn’t heard of the series being interested in buying the game or enjoying it if they did. That said, I thought it was a delight to play and will probably keep it installed on my laptops Steam library for some quick fun while stuck traveling or on my lunch break.