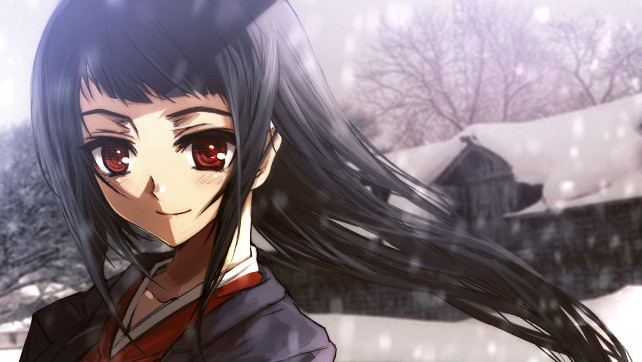 It’s an odd way to do the review, but hear me out.

Petit Novel series – Harvest December is a collection of 13 stories set in the small, snowy town of Tagami. Follow Masaki Konno, a teenager prone to falling into sticky situations through his last year of high school. Each month is a new story that connects and leads up to the final installment, “Perfect December”. Sometimes heartwarming, sometimes violent, sometimes comical, often mystical – for Tagami is known to be a land where a god resides…

Originally released in Japan as a serial, with one story released over the course of a year, this is the whole series in one shot. The “game” retails for $11.99 in North America and each story was ¥200 a piece. When you think about it we got a better deal on this side of the Pacific.

Now I’m not the quickest reader in the world so the game may take me a while to get through. I don’t want to talk about the story as a whole just yet. As of this writing I have finished the first month of December but there is a whole year to go. With that in mind this review is just about the software itself. Overall the game is has a nice interface. It’s simple, but then again that’s all you really need in a visual novel.

The bottom of the screen displays the text of the story with the top screen displays the visuals. For the most part the visuals are restricted to background art to set the scene and occasionally character art of who is talking. Every so often a special piece of art will be displayed on the top screen when something significant or funny happens. To better illustrate the scene.

While this is my first time reading through a visual novel series (on the 3DS or otherwise) I was a little bit underwhelmed with the presentation. I had fancied that this would feel very much similar to reading the dialogue on a role playing game. But not so much. This was a true hybrid of an image less novel with an addition of images at the top. The text on the bottom screen isn’t set up as I am used to with traditional novels, so there were times when I was unsure of who was talking.

It took a bit to adapt to the style, but once you immerse yourself in the story it doesn’t become much of an issue.

One of the nice things that is set up is an auto-read feature. You can have the software advance the pages automatically without the need to keep pressing (A) to advance the story. You can also go backwards if you miss something or need to reread something. The game also allows you to save anytime so you can put it down and pick it right back up. The software also has an autosave feature in case you forget to do just that.

Since the game is based squarely in Japan there is a lot of dialogue and references to things that many Western readers might not be accustomed to. Terms and traditions that aren’t well known over here. The game has a nice little touch where you can tap on certain words for a brief explanation of what they are. It’s a good way to keep true to the story without having to westernize the word or change it entirely. The audio in this visual novel is very well done. There isn’t any spoken word presented, and sound effects are few and far between, but the background music is the star of the show. Doing a good mood at setting the pace through the game and helping set the mood for each scene, the soundtrack is very well done. In fact a soundtrack was released in Japan, which can be downloaded locally through iTunes among others.

I wouldn’t mind more of these titles in the future. Perhaps even having the story released in smaller segments much the same way it was originally done in Japan would be nice.

Once I finish the meat of the story I’ll also include that here.

In the meantime if you are interested in visual novels and enjoy the Japenese culture then you may enjoy Petit Novel series – Harvest December. The story reminds me of watching a lot of anime, except that I am reading that same anime.