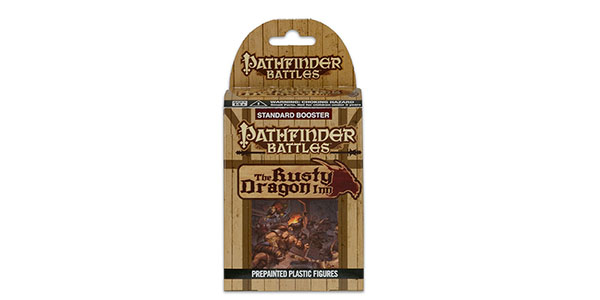 Any experienced tabletop RPG player will tell you that having the proper miniatures can help the immersion of a good gaming session immensely. Sure, the orc you just slew might be represented by a left over red RISK piece but wouldn’t it look better if it was an accurate painted plastic model instead?

WizKids has announced that their latest line of miniatures, The Rusty Dragon Inn set. This set includes figures which includes 51 figures based on heroes, villains, NPCs and other characters from the popular fantasy RPG setting.  These figures are available in two different configurations, as a $15.99 USD booster that includes 4 figures (1 large and 3 standard sized) or a $127.99 8 booster pack brick for the more serious collector.

It has actually been a long while since I played a good pen & paper RPG and Pathfinder just might scratch my RP itch. For the uninitiated the Pathfinder series of role-play systems builds off of the Dungeons & Dragons 3.5 rule-set using the D-20 Open license and is backwards compatible with most Dungeons & Dragons 3.5 books. Not only does Pathfinder smooth out some of the rough rule issues with 3.5 but it also expands on the existing classes and has a colossal 350 monster bestiary!

If you want a closer look at WizKid’s figures they’ve got some promotional shots on their official website.