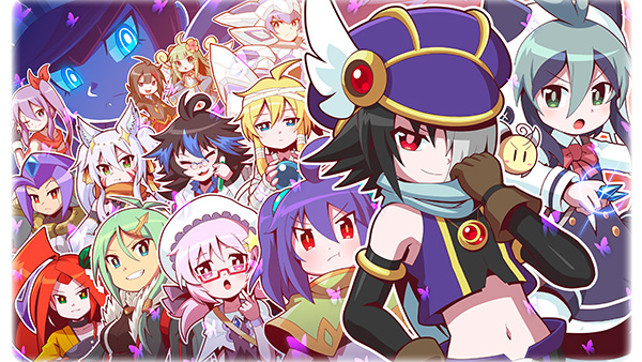 It was just over a year ago that I sat here reviewing the original The Legend of Dark Witch. I enjoyed that game and it got a pretty good review as a result. The game was simple, solid, and fun to play. You’ll find more of the same in the sequel here, with a ton more jam packed into the game.

The Legend of Dark Witch 2: The Price of Desire takes place after the events of the first game.

Syega is a miraculous stone that allows humans to use magic. Many research its powers and develop new uses. Magic helps innovation and people use it as a tool in their everyday lives. But there’s a dark wide within these new powers. Magic has become a weapon to hurt one another. People fight. Wars have began.

Germa, the great magic power in east has been collecting the best researchers in the world, creating the strongest faculty in history. Among them, team “Ich” has become notorious. “Whoever stands against Germa will be overthrown by the magic Ich creates.” Ich is now known as a force to be reckoned with, a threat to other countries Fully aware of Ich’s reputation, Germa sent their research team to Liana to secretly continue its research there. Now, Germa is about to declare war from Liana. Above the clouds a young girl sighs as she looks down on the world. Her name is Zizou Olympia. The god of magical powers, known as the “Dark Witch.” The journey begins a she sets foot on Liana to stop Germa’s schemes…

The game has the look and feel of a Mega Man type game. When you start the game you will have a choice of eight different levels with an accompanying boss character. After you progress through the level and defeat said boss you will learn a special skill, which you then add to your arsenal and can use in the other levels. There is no order to which level you should defeat first, though attacking certain enemies is easier with some of the weapons. For the most part I stuck to the Liner Shot, which is the default weapon.

The levels overall aren’t too difficult, though the game does come with four different difficulties. The game has a lot of platforming elements and as you defeat enemies you collect “tres,” which look like little butterflies. As you collect them you can use them in between levels to upgrade your power of your abilities. You can also adjust your abilities and increase your stock and defense. The game looks pretty simple but has some nice depth.

Also in the levels to collect are four gems. They’re nicely hidden with the gems not visible at all. The only hint to where they are, aside from an upgrade later on to help you, is a small glimmer in the background. Either shoot or pass over the spot and the gem will pop out. But be sure you collect it quickly or it may drop off the screen. These gems are also needed to upgrade certain abilities.

As you might expect with the Mega Man comparison, the keys to defeating the bosses in the levels is a combination of pattern recognition and luck. For the most part the bosses follow a set sequence. Getting this sequence down is key to getting through them intact. The luck also comes into play as some of those attacks are down right tough to avoid.

Controls are tight and level design is also very well done. Certain areas aren’t readily accessible without certain abilities so you may need to venture back into a level or two with the right weapon or skill to acquire an out of reach gem.

An aspect of the game that is very well done is the overall look of the game.

The pixel art and sprites in the levels, including the masterfully detailed backgrounds, is gloriously done. Very fine attention has been payed to something that could have easily been overlooked. It’s also somewhat surprising that the game is NOT in 3D at all, considering the depth and detail in the backgrounds. 3D is definitely not required for a 2D side scrolling platformer, but some other games I’ve tried have pulled it off and has looked great doing so.

Another sweet touch to the game is that the game is fully voiced. For an eShop title you wouldn’t think that as much time and effort would be put into having voice-overs for the dialogue but nearly every bit of text is also spoken aloud. Of course it’s all in Japanese, but I’m completely okay with that. It goes with the anime look of the characters.

This game falls into an interesting cross category. If you enjoy Mega Man style games you’ll like The Legend of Dark Witch 2: The Price of Desire. If you enjoy the anime/manga style then you are also certain to like this game. It’s simple, cute, challenging, and lots of fun.