The headline that greeted me was “Firefall studio Red 5 couldn’t make payroll on Christmas Day” I suddenly felt nostalgic. Red5 I said? Firefall? The game with thumpers and chosen and the melding had been a home to me and a few of my closest friends for a period of an about a year between its mid and late stage Beta testing. An MMO fps, with an open world, Fire fall promised a lot and delivered on very little. So I thought to myself what killed Red5? And their brainchild and babby Fire Fall? Was it the lack of content? No we played the game when there was no crafting (and or it was completely unusable), no missions, and very repetitive un-ranked PvP. During my almost year of time playing the un-ranked, non-progressive, repetitive PvE content I often wondered what kept me coming back. I had no more unlocks to unlock, there were no more guns in game to loot (At the time loot drops were basically non-existent), and I had thumped so many times I had started to wonder if there was a pattern to how the enemies spawned that I could exploit. But, I kept coming back, day after day after day. Why? Because the game was an adventure and during the period from late 2011 to mid-2012 my self and my guildies found out own fun in the world of Red5s Fire Fall, and in the end Red5 removed that fun, and it was the removal of that fun, unbounded game that marked the beginning of their end. 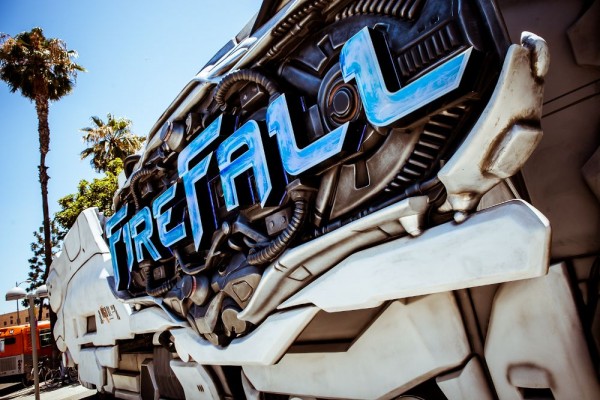 the costly “firefall bus” made by WCC was only one of many errors during the studios time in Beta.

Before we talk about the end we have to go back to the beginning. I remember first hearing about Firefall from a skype friend who I frequently played games with. I had also read a few first impressions like this one. He was describing a new game he had heard about while we played War Hammer Space Marine. “Its so cool, it has jetpacks, and strange odd creatures, and whole open world with tons of people in it!” he said. “what’s this?” I asked always interested in a new game to play. “Its called Fire Fall and its gonna be the next big thing, and I just got in to the Beta!” he replied. So right now im thinking ok, so this is a game in beta, with no real content, and its about shooting stuff. “does it have PvP?” I asked “YYYYYEEEESSSSSS” was the only reply I needed, I was in. So after finishing the game of Space Marine up, we moved on to trying out this new thing called Fire Fall. At the time I knew very little about Red5 beyond that it was a new company and that it had an MMO, so jumping straight it seemed the best option. I knew it was being designed by a former Blizzard designer, and that it featured gun play similar to Tribes (another game we often played). My friend filled me in along the way, explaining that instead of classes this game had “backpacks” which allowed you to equip modules which gave you MMO like abilities that did AOE damage or added buffs or debuffs.  Beyond that the game was pretty pure gun play; there was a nice variety of guns, some that did AoE damage. Some that shot straight in a hi-damage arc, and even a healer class. The game was decently balanced, and even though its PvE lacked Red5 promised that they would continue to add content as the game progressed through beta. That promise would prove to be the games fatal flaw.

When I entered the game for the first time in its first zone New Eden I had very little purpose. The main mechanic at the time (late 2011) was thumping, a mechanic by which a player called down a sort of drill that mined resources out of the ground. Prior to dropping the drill you used a hammer like object to test the ground and see if there were resources there. There were two “Levels” of thumping and that was basically the whole game when it came to PvE. Occasionally Chosen would wander in, and you and others on the server would be forced to fight them. The game felt raw and unfished but its classes felt fun to play, and it was rare that I felt bored, or that I needed to take a break, and when I did the games Wonderful PvP stepped in for competitive rapid paced shooting deathmatch action. 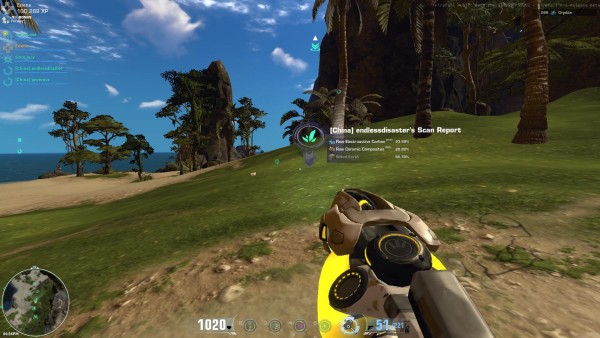 This is what it looked like after you used the hammer, a display telling you what minerals were in the ground.

This feeling stuck around for most of the tenure of my play time, but towards the middle of 2012 I stopped playing, the game had began to feel stale. So what had happened, and was I part of the reason for that headline? Well I think I can trace my eventual dislike back to the lack of identity the game had. While Firefall was fun, it kept changing, and it gave players like me (and by the extension the people who played with me) a sense that the game would never be more than a pretty technical test without a cohesive focus or form. That was the real problem. I would end up droping back in to the game a few times from 2012 untill now, each time finding what seemed to be a completely different game. At one point I had hoped to play some of the games fast competitive PvP only to come back to find it removed all together. A major aspect of the game simply removed. Now given I had not been active in the game in a couple of months, but when last I had been, Red5 had been pushing the E-sports competitive angle quite a bit, and in the past had even gone so far as to host tournaments with large cash prizes. Now that aspect was gone, flung away in favor of a more robust PvE experience, but that PvP aspect had been the only real breath of fresh air in a game that felt repetitive and time consuming. This wasn’t a game killer, there was tons of new content, even new Continents to explore, but the core mechanic was still thumping and the missions just sort of added on top. The game had lost a major mechanic, and yet was considered to be a full complete retail release as of the end of 2014. That’s where the game went wrong, that’s where it lost its diversity and interesting play, and instead opted for a more focused MMO type of game. 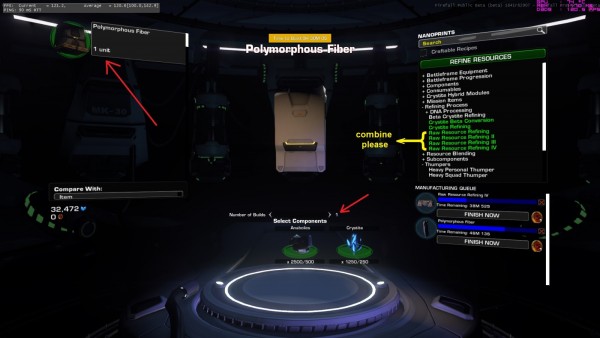 Crafting was confusing and its core mechanics would change every few patches.

Most of this can and is attributed to Chinese company The9 who purchased a large stake in the game early on in its development, and had ultimate decision making power on the games milestones, and direction. In a recent reddit AMA: A staff member discussed what they believe to be the largest problem and it was the micromanagement. The game may have never been feature complete (at least while I played) but it was at least interesting at that time. There are even more posts on the firefall forum and reddit  detailing the problems and issues that the studio has had with money, poor management choices, and a near run in with bankruptcy prior to the arrival of new CEO Mark Kern. Even through all of that I stuck with the game, because it had potential and talent. It might not have been great that day, but I believed that it would be great later on, when it was finished. Sadly like most of the Firefall community, that faith had an expiration date, and now four full years since it first announcment, and over 6 since it was first dreamed of in code, it seems like Firefall has come to a messy, and some what inevitable end.

Tags: FailureFireFallGameswhy did it tank