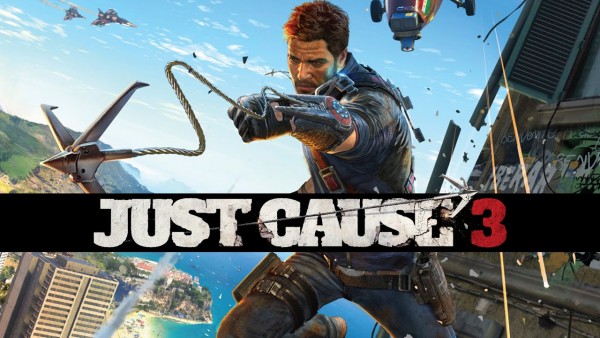 Planning on blowing up DRM? You’ll need a Demolitions Permit, or a Just Cause.

The premise: The franchise’s protagonist, Rico Rodriguez, returns to his home, the fictional nation of Medici, which is now ruled by an oppressive militaristic regime under Generalissimo Sebastiano Di Ravello.

The results: Gloriously cheesy one-liners from a sexy man, and more explosions than the Fourth of July. What, that’s what “liberty” and “freedom” are all about, dontcha know?

I sat down with Just Cause 3, not having much to go on other than the E3 2015 showing, and being peripherally aware of the series’ penchant for ridiculousness. It didn’t take long to get the hang of using your Grapple to zip along the ground, pull out a parachute for a bit of elevation, then immediately swap to wingsuit seamlessly for forward elevation. In towns you could hear “He spends more time in the air than he does on the ground” and it certainly feels that way. Or at least, I want it to.

The wingsuit plays off the game’s verticality very well, and slipping into other games I find myself reaching for a grapple button that’s not there, missing it. It’s good movement, at least when it works. Unfortunately, it’s a bit hit-or-miss, as any object between you and your grapple (like a table, a ledge, a pipe railing) will have you performing the motion of pulling yourself in while you just sort of…stand there? And trying to climb multi-tiered buildings or the mountains is a failed exercise in attempting to create momentum that other aspects of the game work just seem to hold well. 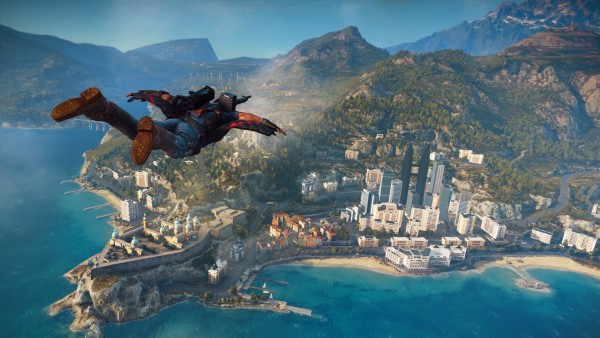 Driving generic “modern cars” or “vintage” cars is about as enjoyable as sunday morning traffic, but the Sports Cars look and feel marvelous, not only in the level of detail as they start breaking after crashes, but the way they sound, grip the road, makes me want to have a score show up for near misses, driving in the wrong lane, etc. The former-Criterion devs makes me forget I’m not playing Burnout, and that’s really saying something. The roads themselves are less impressive, though, and the occupants fall unfortunately even below that.

New to this game is the ability to tether two objects together, and latching a soldier onto a tank of compressed gas, and igniting it to give him a jetpack-to-nowhere was definitely enjoyable, as was reeling in an explosive oil drum into a helicopter, and watching that crash into a radar tower. Possibilities are endless, and the open-world map itself is definitely large enough to hold them, with over 400 square miles holding a total of 130 villages, towns, military bases, and even a capital city. However, between all of those settlements that you have to retake, the game starts to show some rough edges.

Taking down an airbase doesn’t actually cripple the enemy’s air superiority in the region, it just gives you the ability to call an airplane of your own wherever you are in the world, and the act of capturing it is no different than any of the other 129 outposts: Blow everything red up. Sometimes it will have a SATCOM dish, sometimes SAMs will be in the way, but generally your job is to blow up anything and everything red and then eventually the base will be yours. “Freeing” towns themselves aren’t much different. 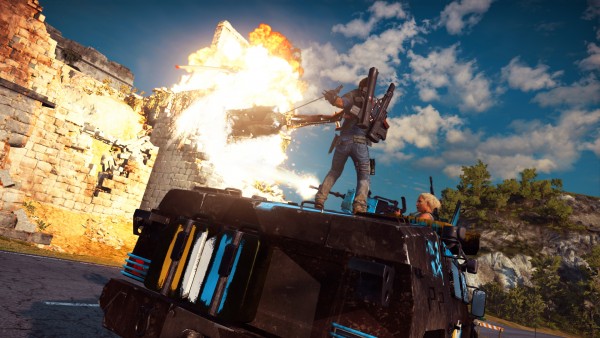 The landscape is big, 400 square miles of big, and it most certainly is gorgeous. At least at first. There’s five biomes across the three regions, but all of the towns and outposts use the same assets (unfortunately not uncommon in large scale open worlds), so while individual screenshots can floor you, going through the game itself loses that coat of wax. And while it tries to be more densely populated than its predecessor, I can’t help but feel that this was trying to do too much, and longer sessions begin to drone on with alarming repetition.

The game rewards you with more weapons than you know what to do with, and ammo is generally plentiful with plenty of opportunities to get more either from guards, weapon racks in outposts/enemy bases, or calling in an airdrop to restock or even replace and continue on. The ability to airdrop in tanks, helicopters, boats, jets, sports cars, anything comes in as a nice touch, but the world itself feels empty and without consequence.

After clearing a base or town, almost all enemy militants despawn immediately, any that are left are killed by your rebels immediately spawning into the area. If you clear all within a province, even the roads themselves start to feel safer. “Accidentally” blowing up your brothers-in-arms, running them over, throwing them out of helicopters that you’re highjacking, they don’t move or respond to your presence unless one of them is joining you to ride shotgun in a land vehicle (or drive for you when you start stunting on the roof). The same can be said for citizens themselves. You can steal a car from them, and they’ll audibly complain they “only had three payments left”, but won’t move to reclaim it if you leave it there. No one obstructs you for being responsible for their family’s deaths, they’re just an unfeeling monolith until it comes time to light the fireworks that their town is “free”, so here’s some side missions to go do for MODs (like increasing the pull or number of your grapple tethers at a time, or adding nitrous or the turbo jump I remember all the way back from TopGear3000). The side missions don’t really add anything of value themselves, feeling more like boxes to check off to get a reward, instead of actual content. 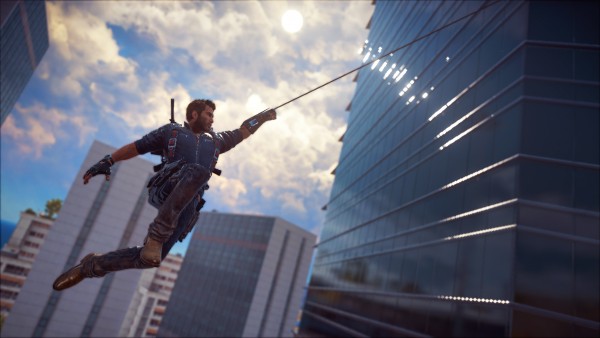 While health regenerates very quickly to keep momentum going, the game loses that momentum outside of enemy bases as soon as you can break line of sight long enough. After that, just stay under the radar and you’ll be literally ignored while in occupied lands. Yes, even if you’re driving down a busy patrolled highway, in a tank spraypainted blue with Medici’s flag all over it.

Once the game lost its sense of consequence, it really lost its sense of fun for me. I started having to count how many provinces left, how many settlements in each province, how would I have to travel there and what would be the fastest way to just blow them all up, which incidentally meant ignoring the guards altogether (and usually using long range missiles on one of the attack choppers). Start peppering the ground with explosions and gatling fire until the game gives me a “SETTLEMENT LIBERATED” splash screen, before loading up a new waypoint to repeat. There’s no consequence.

Square Enix North America provided BrokenJoysticks.net with a review code for Just Cause 3 for the PlayStation 4.