Nvidia has updated its GeForce Experience to add screen shots, editing, and capture tools in to it. Though I think at this point the horse is out of the barn and well, competently gone from the farm. Nvidia has been known for their “stable” drivers for the majority of their company existence, and the Geforce experience is basically a bloated piece of spyware which constantly searches for updates you don’t really need, and now it can stream and take screen shots!

There have been a number of entries in to the streaming field recently, and why not its quite profitable. Im not really suprised to see Nvidia entering the market, and im sure there are some technical arguments for using a capture software directly off of your cards manufacturer’s website, but can it beat OBS?

Screenshot capture comes in addition to the existing video capture feature. You can edit and upload your screenshots without leaving the game. One cool thing is that Nvidia has partnered with Imgur to enable image uploading with resolutions up to 4K. You will of course need to share your Imgur log in details with Nvidia 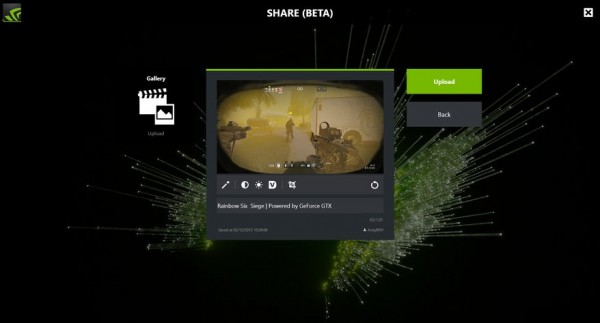 For the streaming crowd  Nvidia has included the ability to stream with a custom overlay, and there’s now an on-screen viewer count which is enabled via an option in the Overlays section of Experience. That is pretty neat, as prior to this I do not belive there has been a tool to easily do this. Additionally, in order to improve your stream’s quality, you can now select your nearest Twitch server to make the most out of your upload speed.

if you want to try it out you can grab it here If you use it and think its better than OBS leave a comment because im still not sold on the idea of using anything branded with Nvidia to stream.