Warhammer: End Times – Vermintide for the PC from developer Fatshark is the newest entry in to the ever growing lore chest that is Games Workshop games. This one takes us for the first time in modern gaming in to the Warhammer Fantasy realm. Its a realm of Dwarves, Wizards, Elves, Humans and Greenskins, rather than Eldar, Orks, Humans, and Chaos. That doesn’t mean there isint any crazy stuff going on, indeed this is a world in as the title suggests “the end times”.  Rat like Skaven have overrun the city you play in and its up to you and team of three other heroes to drive them up and prevent the end times. 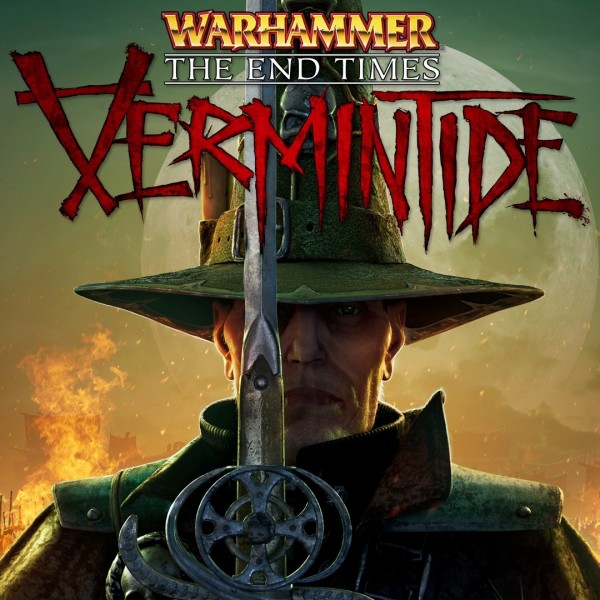 It has to be said, this game is very much Warhammer Left 4 Dead. The mechanics aren’t the same, this is a First person weapon combat games (swords and sorcery) left 4 dead is a shooter. The game itself suffer from no issue I was able to find in my playtime, and perhaps most importantly it has a ton of depth that i Left 4 dead lacks. The game has a semblance of a crafting system, a fairly deep engaging loot system that involves rolling dice. The loot system feels exciting even if it is mostly just random chance. There are items to collect for each class and three trinket unlock slots for as you level up.  The forge system requires raw materials that can be collected and broken down from various weapons and other things in game. All right back to those Skaven, remember them? Rat like humanoid creatures that want to mess up your day? You the player must select from one of the 5 unique classes (waywatcher, witchhunter, dwarf, wizard, soldier) and take to one of the games 13 levels to beat back the (literal) vermintide. There is no central plot in the game, rather the developers have opted to use a hub and spoke configuration, where there is a central inn where crafting is done, missions are selected and parties are created, the party then deploys to the selected mission. Although to start off there are only a handful of missions to play, as you level up more unlock, and each has 5 difficulty levels to play if you really start to feel bored. Each level feels unique, with beautiful set pieces pulled right from Warhammer Fantasy battles. The massive Gothic town you battle in and around has a living breathing feel to it, with metal, wood, and stone that befit the motif of a fantasy battles city. I really cant say enough about how well atmosphere is done in this game, its always sort of dim, the lighting makes if feel perfectly at home in the fantasy world, and the Gothic touches really take it over the top.

Game play is unique for a game of this style, each character has a ranged and melle weapon. Some are balanced for special use of one of the other, and some are fairly even in both. I found my self most liking the elf waywatcher, as her fast blade style allowed me to dart in and out of the masses of Skaven poking and slicing as I went.  This allowed me to stay at fairly close to full health and still be of use to my team, and whenever I ended up low, I ducked to the back line behind the two “tank” characters and switched to my bow with the 64 arrows to do some long shot work.  Even the bow has variable mechanics it has both a charge shot and a quick feather style to it. The charge shot is good for taking out armored enemies and those who are far away. Each character features a uniqe set of weapons and trinkets as well, meaning that this game has a huge amount of playability. One of the items that is findable in game, gives a chance for a better item at the end of the level, so playing again and again to memorize the locations of these items seems to be quite worth it.

Each of the Charcters has a unique mechanic, but by far my favorite is the Bright Wizards, the games only magic weilder, the bright wizard is fire shooting, death dealing machine, who for lack of a better word, has to cool off after a series of attacks. I mean that literally, the wizards fire attacks generate heat, and after using several the player must switch out to the melee weapon or vent that heat by standing still and holding R making themselves vulnerable. Other characters have more ranged or melee focuses, the most melee being the dwarf and the least being the wizard. Most of the characters are a happy hybrid, with ranged guns or bows, and a sword or axe, or war hammer.

Each of the games 13 missions features a cinematic opening, and an inn keeper sets the stage for what the purpose is for each mission, unfortunately that’s all the lore you get in spoken form. There was one point where I was fighting in the tower of a grey wizard (what ever that is) and I was tasked to protect his channel points of a spell, but before that we had no mention really of magic or wizards beyond our playable character the Bright Wizard, and I immediately wanted to find out more, sadly there wasn’t anything to supplement besides the bits of in game flare text, and spoken character dialog. Luckily the game play makes up for any shortfalls. While you will be doing (mostly) the same thing for all of the games 13  levels, I did not find myself bored of the game at all. The sound design is incredible, and I almost always felt like I was just one note from a massive onslaught of Skaven. While the graphics are far from cutting edge this is understandable when you look at how many objects have to be on screen. Between my screen getting splatter with Skaven gore and the awesome sound design I didn’t find myself pulled out of the game because of its lack of shine cutting edge graphics. This only became an issue onece or twice when I was playing waywatcher and wanted to nail that really far away shot on an unseen or hard to see enemy who was just at the end of draw distance.

The loot system in the game is what kept me coming back. I am an admitted loot addict, Diablo style loot driven games keep me coming back for hundreds of hours.  Vermintide has a unique approach to their loot, a dice rolling system. What you roll determines the strength of the item you get, with the standard RPG rare-ness seeming to be in effect, common, uncommon, rare, and legendary appearances, here being called, plentiful, common, rare, and exotic. Purchases of the collectors edition will also get a few trinkets and items which help in this look finding grind. The genius behind this loot system is that it makes the game endlessly re playable. You can farm the earlier easier levels for hours just to find the rare materials you need to upgrade a simple broad sword to one of a better quality. Unfortunately I think many people won’t share my enthusiasm for the loot farming. You do have to farm, the majority of the loot you get is going to be plentiful, and it can take hours to unlock a single rare item, much less the legendary ones (I still haven’t seen any) but presumably the reward is much greater for each of those separate types.

The game also contains the standard forge mode stuff: a forge to upgrade, break down, and salvage items; a place to add stats (called a shrine of solace)  and a loot storing area where you choose equipment. These bits of subgame play make the game feel more like Diablo and less like Left 4 Dead, and are a much needed addition to prevent the obvious accusation of this just being clone of a game.

The team is all there is

So I can’t write a review about this game without a single gripe, its hard to find a team right now. This game is a 30$ pick up on steam, and was recently 15$ during the winter sale, so I expected it to be quite easy to find people to play with. I was able to find people but this is a team game, and often the people I found had no interest in playing like a team. I would think that most people probably can solve this by stacking up a game with steam friends, but I found that difficult, as most of my friends did’nt have the game. Luckily the whole game is drop in drop out, and allows for anyone to take over the AI controlled characters at any time. So its not too hard to start a mission and run with the (Very good) AI companions to start then by the finish have a full team of 4 humans. Voice chat is built in, which is nice, but I found very few people using it, and even less who wanted to chat about the game while using it. My hope is that after some more time a larger community might grow organically and more people playing means easier time finding games.

I loved Vermintide, the game has a few noticeable flaws, but as the first entry in to what I hope will become a really crowded genre (Frist Person Combat) there is certainly room for improvement, but I think its outweighed buy how fun the game is. I still feel a giddy sense of excitement every time I hear the call out of a special enemy and at the end of mission when the dice is rolled for loot. A few small nitpicks, there is no tutorial, figure it out as you is all you get. There is only one game play mode, the missions, no free play at all, so no ability to set up custom matches either. The rest I can deal with, common complaints of the movement feeling slow, and of the action being repetitive I can’t really complain about because of my love for how the game handles its first person combat and loot. The game is also completely free (as far as I can tell) from any of the technical issues that often plague online only multiplayer titles. I experienced zero server lag , and no glitching while I played.  Over all I love what Fatshark have done with the Left 4 Dead idea, bringing it in to the Warhammer universe and giving it a proper coat of polish with loot and a variety of levels and objectives.