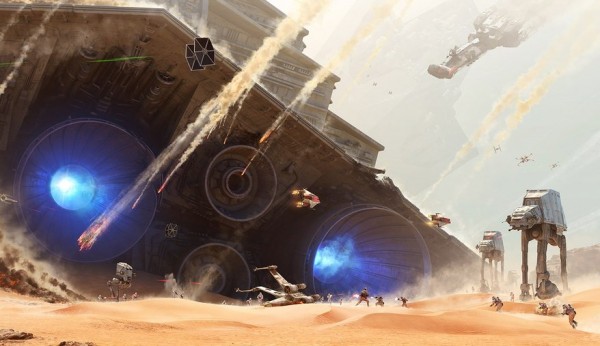 One of the major complaints about the newest Star Wars game is that it just doesn’t feel like battlefront one and two did. It doesn’t have the scale. There is no galaxy map to conquer, and even the large walker assault mode feels empty at times. It seems EA is looking to rememdy this with the Battle of Jaku DLC. In a recent blog post  they have announced that the newst mode, which is to be called turning point, will have massive 20 on 20 action.  The game mode will have Rebel forces pushing hard to capture a series of increasingly difficult checkpoints en route to taking an Imperial base on the surface of the planet, while the Empire’s minions must hold the line against them.

The new map will feature three control points, each of those points will need to be captured, but in a twist on classic take and hold, the rebels will be the only ones taking. I haven’t seen this mode in action, but it really sounds similar to almost every single other point based capture mode, even reminding me of the recent Overwatch Beta which had a map where you had to conquer two points one after the other. Battlefield also had its “rush” mode where you were tasked with capturing two or three points in a row to win. All of that being said, it doesnt really seem like this is a new mode, so much as it is a walker assault with out the walkers involved.  The major diffrence seems to be that the assault is timed, so its capture a point in an amount of time, then capture another, and finally the Rebels will get to assault the Imperial base. EA have said that Air speeders and AT-STs will be prominent in this mode.

EA have especially mentioned that this mode will not be as frustrating to rebels as walker assault is, specifically saying “the out come is never sure” well that one ill believe when I see it. At least this means we are getting a new tileset for a map, when asked about the new maps DICE Concept Artist Anton Grandert explained:  We wanted to portray a battle completely surrounding you, in every direction, Debris is falling from the sky, telling the story of battles above. On the surface of the planet you can see ground troops as well as X-wings, all taking part of the fight.”

perhaps most interesting of all The Battle of Jaku DLC is going to be free. The Battle of Jakku DLC will be available to anyone who preordered Star Wars Battlefront on December 1, while everyone else can get their hands on it a week later. Perhaps EA have re-considered the idea of charging the price of the full game for their DLC?