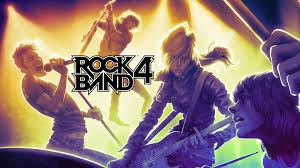 Harmonix is doing a good job supporting their newest rhythm product Rock Band 4. Rock and Roll Hall of Fame legends Van Halen is coming to the Rock Band Music Store for Xbox One and PlayStation  4 tomorrow, November 24! With more than 80 Million records sold Van Halen is no doubt one of the greatest Rock bands of all time. Their addition to the newest Rock Band game in the long running, much beloved series from Harmonix, was all but assured. Now you too can pretend to be Eddie Van Halen, or David Lee Roth, and get the feeling of being a rock star!

Since the end of the rhythm games era, Rock Band 4 and Guitar Hero Live have been the only remaining competitors. Rock Band has elected to stick with a simpler DLC model, while Guitar Hero has decided to opt for a less traditional model of creation of a TV like service where songs simply play and you play along with them.  Personally I really like the ability to get DLC that I want or do not want. The flip side of this is that DLC obviously costs money, but at least with the choices of DLC you can decide what you want to pay for and what you don’t.