The desolate wastes have been calling out to me ever since the anticipated reveal of Fallout 4 this past E3. Like the game’s main character, I too hid underground although figuratively speaking. For the past few months I ignored any small gameplay snippets, cell-phone videos and plot details that leaked out of Bethesda ahead of the game’s release. With the large steel doors of Vault 111 finally open as of yesterday I’ve finally got the chance to spend nearly ten hours in the Boston wasteland. Here’s a brief journey of my character’s journey from the relative safety of Vault 111 to the streets of Diamond City.

If you watched the game’s reveal at E3 then the game’s opening tutorial, taking place before the Great War, will be no surprise to you. Like that E3 demo the first thing that will great you is the robust character creature. With a new “sculpting” system Fallout 4 allows you to customize almost every aspect of your character’s face. Everything from the tilt of your forehead to the length of your lips and philtrum between below your nose is customizable. For those of you who might be perfectionists you could easily spend a couple of hours making your character perfect before experiencing any of the actual content. I chose to only spend about 15 minutes making my character – quick and dirty won the day over minute details because I just wanted to jump in right away. One of the most exciting features of Fallout 4, the ability of NPCs to pronounce your name – as long as it is among the dozens of choices – really got me excited. Not only would my main character, whom I called Zoe, would have her own voice but also be referred to by name. Sadly, the selection of names is laughably limited – my real-world name “Rae” nor my middle name “Michelle” were  unavailable. Not even the long form of my first name “Rachel” was available. It seems that in terms of female names Bethesda really dropped the ball. But if you really want to call your character Donald Trump or AssFace you can… what the hell Bethesda? 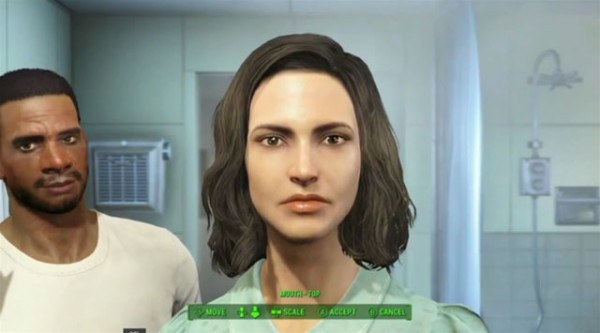 I won’t spoil any of the story particulars but your character’s motivations aren’t nearly as enticing as Fallout 3’s protagonist. There’s no gently voiced Liam Neeson for you to get attached too. Rather than build on what I felt was one of the best tutorials in terms of setting development Bethesda has decided to throw players into the thick of the action within the opening hour. For better or worse (some fans have complained about the length of Fallout 3’s tutorial – and I can see their point if you’re going to roll multiple characters) you’re exploring the wastes, wrecking bandits and collecting caps within record time in this latest installment.

As I emerged from Vault 111 Zoe could embark on the main story quest right away but in all honesty that’s just not my deal. In Bethesda games I’ll get to the story missions when I get to them! Having not read anything about any of the locations prior to the game’s release I explored the east coast with a sense of wonder and fear of the unknown. Would I come across a bandit camp? When would I find my first trading post? The possibilities were almost endless! 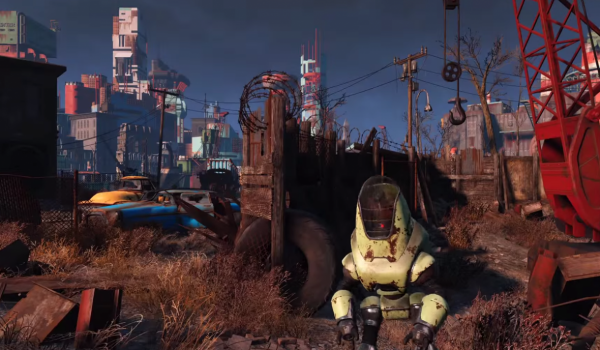 Just take a look at the colorful Boston wastes!

It wasn’t long before I came across my first bandit camp while exploring – this gave me my first (unsuccessful) taste of the gunplay that Fallout 4 has to offer. Shooting, reloading and taking cover from enemies feels a lot more fluid than Fallout 3 or Fallout: New Vegas. The addition of aiming down the sights of your weapons also makes precision outside of the returning V.A.T.S system a lot more effective. Popping off a few headshots in quick succession without using all of your action points is now a plausible strategy for some encounters. Melee combat still feels a bit clunky, maybe a little less-so than Bethesda’s recent Skyrim thanks to more animations, but using a firearm is a lot more gratifying than taking down enemies with a baseball bat. Speaking of V.A.T.S – movement and combat now continue, albeit at a severely reduced rate while engaging V.A.T.S. This forces you to make split second decisions on where to fire and at what intensity. At first I was unsure if this addition would add or detract from combat but ultimately I feel like it makes things feel a little more hectic and lifelike.

After Zoe had gutted the raiders of all of their gear and supplies it was time to sell some of this junk. As I continued down the road I came across my first trading post – about 4 hours into my journey. This particular trading post had been set-up in the halls of a long abandoned Diner. Unfortunately, the Diner was under attack by a group of bandits whom I dispatched (and looted) rather quickly. Not only did this earn me some free gear, experience and reputation with the local traders but it also opened up additional side-quests.  One of the most noticeable things about Fallout 4 from the brief time that I’ve spent with the game is that there are a number of side-quests that you can stumble upon just by speaking to the denizens of Boston, sometimes they don’t even have to talk to you directly. A citizen might mention the mysterious Institute or a long forgotten colony of ROBCO Robots and this will initiate a side-quest via your pipboy. It doesn’t give quests the most context or back-story but it does provide you with breadcrumbs of information for you to explore at your leisure which honestly adds to the game’s allure. 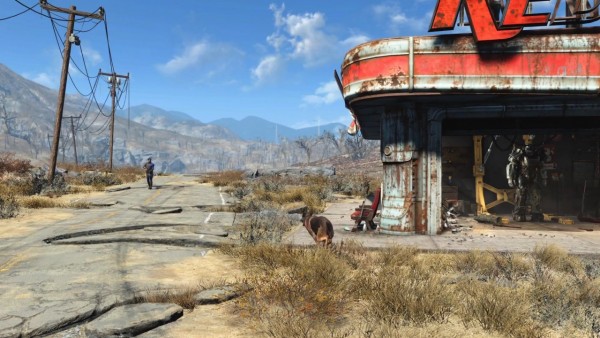 Power-Armor is just calling out to me, but I have a feeling it will be awhile before I get to use it.

I’ve barely scratched the surface of the Fallout 4 experience in this rather lengthy impressions piece. Just like my ten hour save file I feel like I’ve only begun to experience the all-encompassing nature of Fallout 4 and that there are a lot more surprises instore for myself and Zoe. So far I’ve enjoyed the game’s revamped combat, rich amount of side-quests and the sense of exploration that is typical of Bethesda games. There are so many other facets to this game that I want to write about but I’ll leave that for my full review next week once I’m at least 40 hours into the game.

Now, does anyone have any Rad-Away? I think I’m starting to glow…