The newest addition to the line up for Blizzards huge MOBA overwatch has been annoucned. Her name is D.VA (pronounced DIVA). She appeared briefly on Blizzards official over watch twitter with a link to the  StarCraft 2 WCS site. In game  Hana “D.Va” Song is, in game lore, a real StarCraft 2 pro. She’s the best in the world, in fact, but she’s taking a break from the game so she can serve her homeland.

“At the age of 16, D.Va became the #1 ranked player in the world and proceeded to go undefeated for the next three years in all competitions,” her official StarCraft 2 player biography states. “D.Va is an international star, beloved by her fans at home and abroad, and has toured in exhibitions around the world. Recently, she has taken a step back from competition to focus on her commitment to protect the safety of her homeland.” 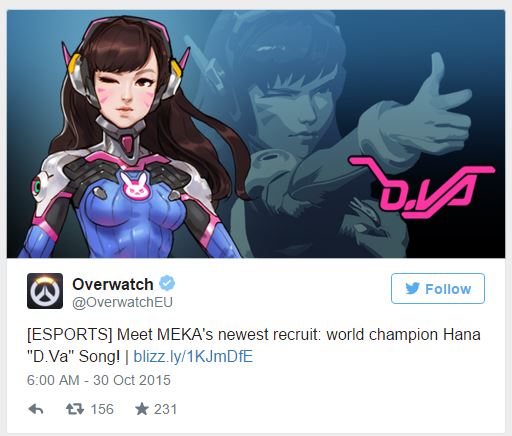 Intrestingly she is not yet listed on the Blizzard official Overwatch site, so we have no idea what she can do. Personally id love to see her pilot a mech, as many forum posts and websites have guessed.  She is also described as “MEKA’s newest recruit” on Twitter, lending that theroy even more credence.

We will wait official word from Blizzard then update the story!