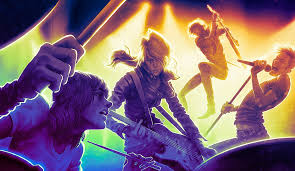 The lights dim down on the crowd as the neon lights come up on the stage and a lingering anxiousness hangs in the air as I begin to pluck at my guitar for the first time in seven years. Surely this is what my in-game avatar would have felt while playing her first set-list in over six years. She wasn’t playing with her old crew, in fact this show was probably just a guest spot, and she’s now rocking a brand new look complete with a side cut. After spending a night out living the rock star lift vicariously through my avatar with Rock Band 4 here are my first impressions.

Harmonix’s first Rock Band title on the new generation of consoles offers complete compatibility with their previous generation of instruments (as long as you are upgrading within the same console family) as well as compatibility with a select few Guitar Hero instruments. This meant that I was able to wield the dusty Fender Stratocaster that I had played with on the PlayStation 3 back in the Rock Band 2 heydays of ’08. Strumming away on the green, orange, yellow and red frets felt just as enjoyable as it did eight years ago.  Granted I was in my early 20s when Rock Band was in its prime and now I’m entering the end of my 20s, and just like any rocker who’s maybe past their partying prime I was a little rusty out of the gate. Where as in Rock Band 2 I could easily hammer out most of the songs on hard mode I was limited to medium for this opening act. 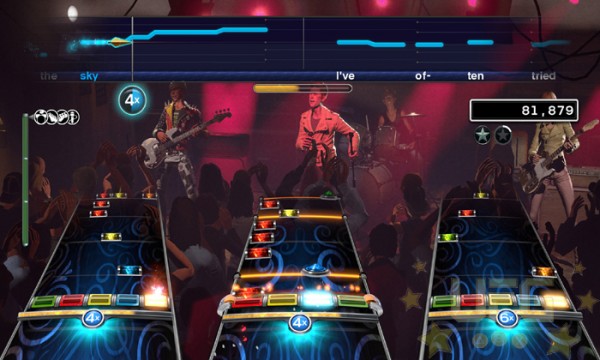 I chose the Play a Show option for my first foray into RB4  – this new mode allows you (and if you have them up to three friends) to begin playing what amounts to a near endless set list with the game making suggestions for your next track. After the successful completion of a song the game will ask you to vote on the next track by asking you examples like if you want “a nu-metal song” or “a song from the 1980s”or even “a song by Aerosmith”. Presumably the option with the most votes will win the voting round but because I was performing this show solo the only vote was my own. I’d imagine that when you have a living room full of folks ready to rock out the discussions before voting can get quite intense.

Last night’s show started with Aerosmith’s Toys In The Attic a song that I had until that point not even heard – my tastes in music aren’t really that broad to be honest. It helped set the mood perfectly for our set with its strong drum beat and fast paced. Despite this rocker’s lack of practise we wow’d the crowd with a four star performance. As the gig continued during voting I selected “a song from the 2000s” and the game had selected Disturbed Prayer as our second song. Disturbed is a band that I honestly haven’t really listened too in a long time – at least since high school – but their energy and chord progressions fit nicely with the lively night that Toys In The Attic helped establish. As things wound down and I played a few more songs I wanted to go out with a bang – the game prompted me with Avenged Sevenfold’s Hail To The King and I immediately lit up. Hail To The King was one of my favorite albums from 2013 and to see it included on the disc was a nice surprise. We wrapped up the night of fast metal-infused rock with a more modern take and as I selected quit the crowd begged for an encore – literally, in a new option available during Play a Show the crowd will chant “one more song”. Sadly I had to turn them down because my hands were starting to cramp.

Harmonix was nice enough to provide us with a review copy of Rock Band 4 for the PlayStation 4. I’ll be posting a full review of the game as soon as I get some quality time with the other instruments as well as make a dent in the career mode.