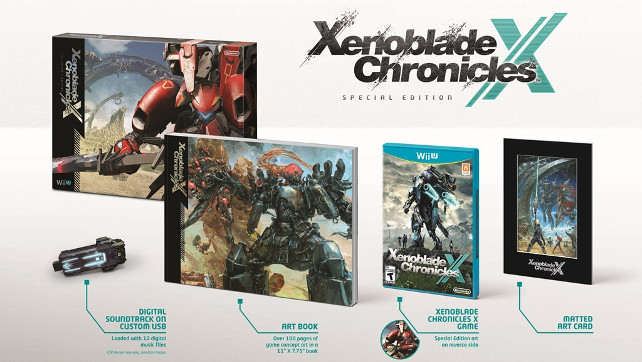 Launching alongside the standalone version the upcoming Wii U role-playing game Xenoblade Chronicles X on December 4th is a Special Edition overflowing with content. The special edition, which will retail for $89.99 contains the game, a book of concept art, a USB drive modeled after the gameès Lifehold Unit pre-loaded with 10 music tracks from the soundtrack, and a limited-edition matted 5×7 art card of a painting done for the game by illustrator Takashi Kojo

The Xenoblade Chronicles X speical edition is unique to North America and is already available for pre-order.

In this new game, Earth is destroyed and humanity faces annihilation from an intergalactic war between two alien races. Players must fight for their survival and explore a new planet full of exotic and hostile life-forms. To traverse the planet with ease, players can pilot customizable mechs called “Skells,” which give them powerful weapons. Players can also customize a lethal skill set of combat and defensive skills called Arts to strengthen their strategies and defeat enemies efficiently.